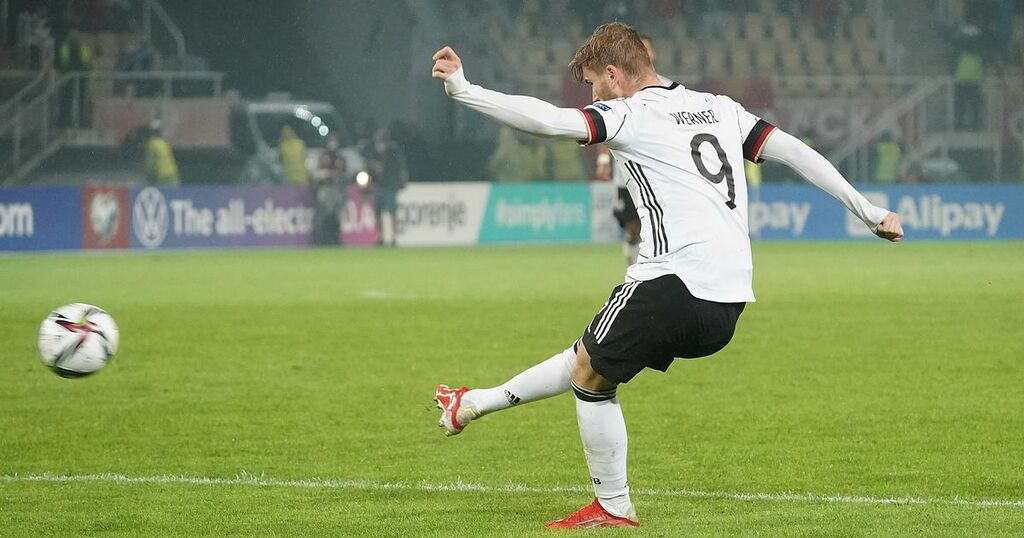 Timo Werner scored twice for Germany on Monday night as they became the first side to qualify for the 2022 World Cup in Qatar with an emphatic 4-0 win over North Macedonia.

The Chelsea striker netted twice in three minutes in the second half, adding to club teammate Kai Havertz’s opener in Skopje before Jamal Musiala finished the game off late on with the fourth goal.

Germany have won their last five games under new coach Hansi Flick, who replaced Joachim Low after Euro 2020 where the Germans were knocked out by England in the round of 16.

In the five games the former Bayern Munich boss has overseen for Germany, Werner has netted five goals.

Werner has hit three goals in his last two games for club and country having also bagged against Southampton in the last Premier League game before the international break and is hitting form at just the right time ahead of his return to Chelsea later this week.

Werner’s struggles in front of goal since arriving in west London from RB Leipzig last summer have been well documented and it’s unnecessary to go over them again.

With the signing of Romelu Lukaku on a club-record deal in the summer and the Belgian being the “missing piece” for Thomas Tuchel’s side, Werner’s place in the Blues side was very much under threat.

It appeared that was the case too as the Germany striker started only one of the first five Premier League games for Chelsea this season, that solitary start coming in the season opener against Crystal Palace when Lukaku was unavailable.

Scoring against Aston Villa in the Carabao Cup got Werner off the mark for the season before adding to his goal tally for the campaign against Saints, scoring the crucial second goal to put Chelsea 2-1 up against their ten-man visitors.

The 26-year-old is a streaky player when it comes to goals and has struggled to find consistency in his game since arriving in west London. Now though, he might have found it.

That is good news for Tuchel and Chelsea, especially with Lukaku missing Belgium’s Nations League third place play-off defeat to Italy at the weekend and Belgian boss Roberto Martinez not committing to a timeframe for Lukaku to return in.

Chelsea’s No.9 has had a bit of a goal drought by his own standards, scoring for the first time in four games last midweek in Belgium’s defeat to France in the semi finals of the Nations League.

Tuchel has previously spoken of his desire to see others step up to take the load off Lukaku, who scored four times in his first four games for the Blues. While Lukaku was brought in to score the bulk of the goals, Chelsea’s other forwards needed to step up.

They were somewhat goal shy last season, demonstrated emphatically with Jorginho being the club’s top-scorer in the Premier League in 2021/22 with seven goals, all of them from the penalty spot.

With doubts surrounding the fitness of Lukaku and a game against Brentford on the horizon this weekend, Werner could once again be named in the starting eleven this weekend. The Bees have started their first top flight campaign in fine style and sit seventh after their first seven games.

With Werner finding the net for his country as well as his club over the past fortnight, it is exactly what Tuchel will have wanted to see from the international break from one of his strikers who hasn’t quite lived up to expectations since making a big-money switch to the Premier League.

Werner's infectious energy and work rate are all well and good but it was his goal scoring that was the cause for concern since making his move to England. The man himself and his head coach will be hoping this is the start of a glut of goals as the Blues look to cement their place at the top of the Premier League standings.