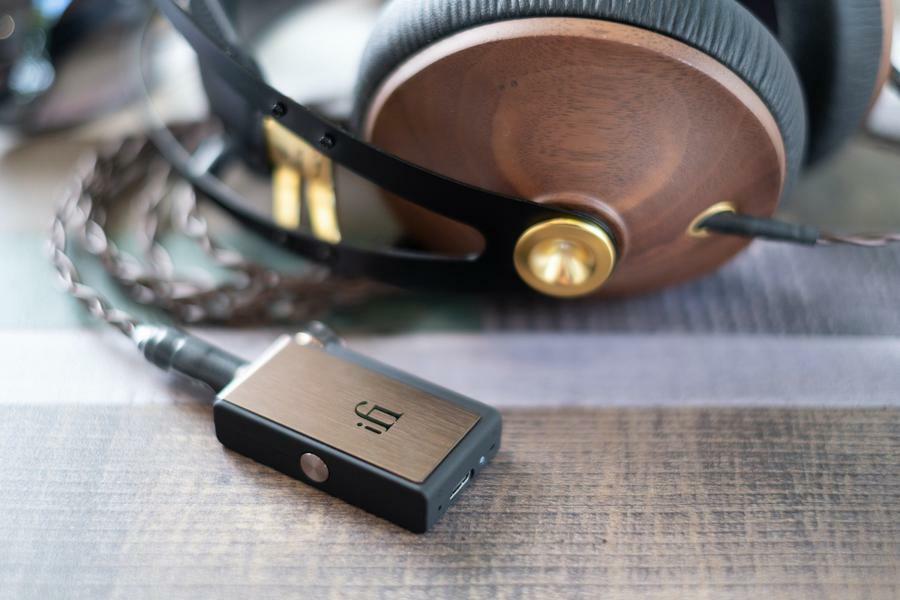 If you love listening to hi-res music on the go, this little gizmo from iFi is bound to tickle your fancy.  This delightfully small headphone DAC and amplifier is no larger than a Zippo lighter and weighs less than a single AA battery.

The iFi GO blu pairs wirelessly with a smartphone, tablet or computer over Bluetooth. It’s doesn’t need any cables. Just pair... and go. But while the GO blu is super convenient and produces pristine sound for any pair of headphones.

Most pocket-size Bluetooth DAC/headphone amps use an all-in-one ‘system on a chip’ to take care of the input, digital-to-analog signal conversion and amplification. These devices are easy to implement and are cheap, but they aren’t expertly designed with optimized circuit stages.

For a device of this type and size, the GO blu is unusual in having a clever design that includes separate Bluetooth, DAC and amp stages, each stage engineered in distinct blocks to deliver better quality sound than an off-the-shelf design.

According to iFi, the way that Bluetooth is implemented on the GO blu is anything but ‘run of the mill’. Making full use of Qualcomm’s latest four-core QCC5100 Bluetooth processing chip, all of the current high-definition Bluetooth audio codecs are supported, including aptX Adaptive and aptX HD, LDAC and HWA/LHDC plus AAC use by Apple in iOS devices and the basic SBC Bluetooth codec.

By supporting such a wide range of codecs, the GO blu can connect at the highest quality supported by the device that’s streaming the audio. I can’t think of any other pocket DAC/Amp that works with many codecs. The GO blu is built on Bluetooth v5.1 to ensure the best possible range, stability and performance. Better still, its ‘Bluetooth engine’ can be updated over the air.

The Bluetooth circuitry of the GO blu feeds the DAC stage, which uses a Cirrus Logic 32-bit DAC chip. This is coupled with a customized digital filter that minimizes pre-echoes and ringing artifacts. There’s also a precision clock system to ensure ultra-low jitter, thereby reducing errors and distortion in the digital audio signal.

The analog circuitry in many of iFi’s audio devices focuses on a balanced design, traditionally a high-end concept. The GO blu uses the same high-end design despite its small size. The amp circuitry has symmetrical twin-mono signal paths that use iFi’s Direct Drive design concept – direct-coupled to ensure the signal path is clean and free of distortion-inducing output coupling capacitors.

In true iFi style, the GO blu incorporates high-quality components not usually found on devices at this price point, they include TDK C0G multilayer ceramic capacitors and inductors from Taiyo Yuden and Murata. The net result is ultra-low distortion across the entire signal bandwidth and a sound that iFi claims is pure, clear and naturally expressive.  The amp stage delivers up to 5.6V – more power than other small DAC/Amps – able to handle headphones that are difficult to drive. To ensure signal strength suits the sensitivity of the connected headphones or earphones, there’s an auto-gain feature that adjusts the output up or down by around 6dB.

To shape the sound from this little device, there is something called XBass, a sophisticated form of ‘bass boost’ that enhances lower frequencies without treading all over the midrange. This is particularly useful with earphones and open-back headphones that may be a bit light on bass. The second sound-shaping feature is called XSpace, a setting designed to compensate for the ‘in-head localization’ effect that can occur when using headphones to listen to music that was mixed using a pair of speakers. XSpace widens the soundstage to create a more spacious sound that’s more like listening to a pair of loudspeakers. Both these optional settings are applied to the analog signal rather than messing with the digital signal via Digital Signal Processing.

The iFi GO blu has two headphone outputs. One is a 3.5mm socket for headphones with a single-ended connector. The second output is the relatively new4.4mm Pentaconn jack that enabling balanced headphones to take full advantage of the GO blu’s balanced amp design. Additionally, the 3.5mm output benefits from iFi’s S-Balanced circuitry, cutting crosstalk and related distortion by half when used with regular, single-ended headphone connections.

The GO blu may seem counter-intuitive by using Bluetooth to connect to wired headphones. Why not plug the headphones directly into a smartphone or use a pair of wireless Bluetooth headphones instead? Well, in the first instance, many smartphones don’t even have a headphone jack and using a standard pair of Bluetooth earphones can’t match the high-quality audio that the GO blu can deliver. It all comes down to sound quality Wireless headphones or earphones integrate Bluetooth processing, D/A conversion and amplification onto a tiny single chip and there’s a limit to the sound quality that they can achieve.

Choose a good pair of corded headphones or in-ear monitors, and team them with a separate, high-quality portable DAC/headphone amp, and the sound quality you can get will beat any pair of wireless headphones or earphones, plus you can use high-quality wired headphones with devices that don’t have a headphone output. GO blu offers a powerful, pocket-size DAC/headphone amp with Bluetooth connectivity, backed up by enhanced sound quality that can deliver the kind of sound that you’d normally expect to hear from a grown-up hi-fi system.

The iFi GO blu is housed in a lightweight, soft-touch polymer enclosure with a copper-colored trim and watch crown-style control. The device even has a high-quality chip-based (CMOS-MEMS) microphone for making hands-free phone calls, voice chat for gaming and access to voice assistants like Apple Siri and Google Assistant.

Power for the GO blu comes from a rechargeable 8-hour battery that can be topped up via the USB-C charging port. That USB-C port doubles as an audio input so that devices without Bluetooth can be connected using USB. The GO blu supports PCM audio data up to 24-bit/96kHz when using a cable connection.

I haven’t had a chance to listen to the new iFi GO blu, but if it does even half of what it claims, it’s going to be a brilliant little gizmo for those of us who refuse to compromise when we’re listening to music on the go. For someone like me who loves using wired headphones but who has a smartphone that doesn’t have a headphone jack, it’s the answer to a prayer. Finally, the price is sensible for what’s on offer. I can see the GO blu proving a popular traveling companion with audiophiles everywhere.

Price and Availability: The iFi GO blu Bluetooth DAC/Amp for headphones is available from 10 September and costs £199 / $199.