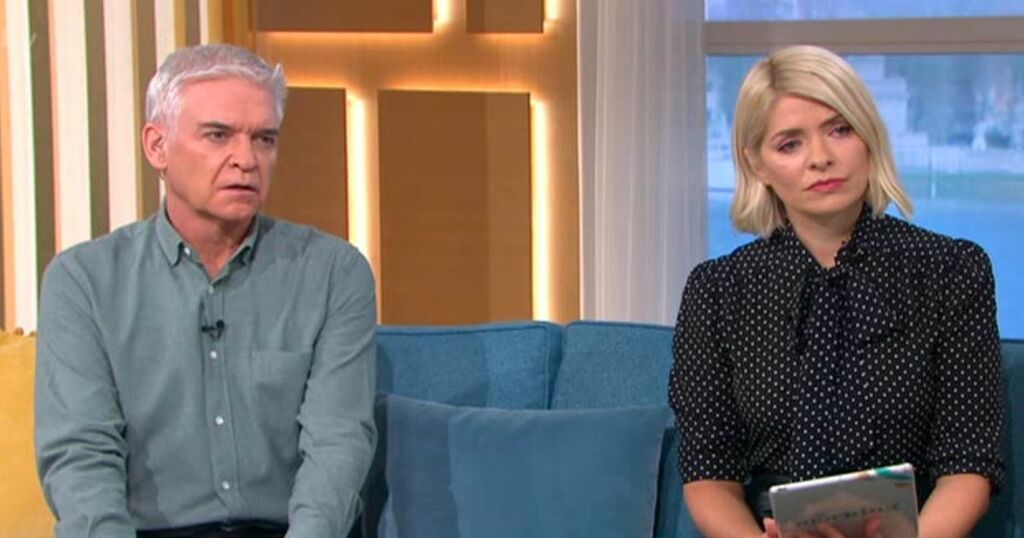 This Morning made a very rare change to the ITV show on Wednesday.

Holly Willoughby and Phillip Schofield were back on screens to front the ITV daytime show.

The latest episode saw them launch a campaign to help bring awareness to one of the biggest taboos - the menopause - as well as the usual food and beauty segments, and celebrity chats.

But there was another story they were talking about which dominated their 'This Morning's View' segment.

Holly and Phil were joined by Camilla Tominey and Nick Ferrari as they spoke about the latest news headlines - particularly those surrounding the latest government scandal.

The conversation came ahead of the Prime Minister making his first public appearance since the leak on Monday of an email from his principal private secretary inviting Downing Street staff to the gathering in May 2020 to "make the most of the lovely weather".

They then returned to the story later, with This Morning going live to the House of Commons for Prime Minister's Questions as Boris Johnson apologised for attending a "bring your own booze" gathering at Number 10.

Viewers then watched as Holly and Phil were relieved of hosting duties and the programme cut to Westminster as Mr Johnson was challenged over his appearance at the event, which was held in the garden of Downing Street during the first national lockdown.

Martin Reynolds, Mr Johnson’s principal private secretary, is said to have sent an email to more than 100 Downing Street employees inviting them to the evening event on May 20 2020.

As PMQs began, co-host Phillip Schofield told viewers: "It is exactly midday and we are heading over to Westminster, where Prime Minister Boris Johnson is about to address the Commons."

After the Prime Minister was challenged by Labour leader Sir Keir Starmer, This Morning cut back to the studio where Holly and Phil were joined by Camilla, who is the associate editor of The Daily Telegraph.

This Morning rarely cuts to breaking news stories and the same time slot on Monday this week featured an interview with Coronation Street actor Bill Roache, while Tuesday’s episode featured a fashion segment about how to add "some January joy" to your wardrobe.

Phillip said as they returned to the studio: "He has admitted he was there for 25 minutes or so (and) should have said they should all have gone inside. Was it a work do? Was it a party?"

He also read out the email from Mr Reynolds inviting staff to the gathering.

Camilla said the apology had "certainly been a mea culpa" but questioned whether it would be enough to save his premiership.

One of the other times This Morning has cut to another broadcast was when the death of Prince Philip was announced.

Eammonn Holmes and Ruth Langford were hosting the show at the time the news broke with a statement from Buckingham Palace on behalf of the Queen.

The hosting duo had to suddenly end their This Morning broadcast and viewers were then taken to the ITV News studio.