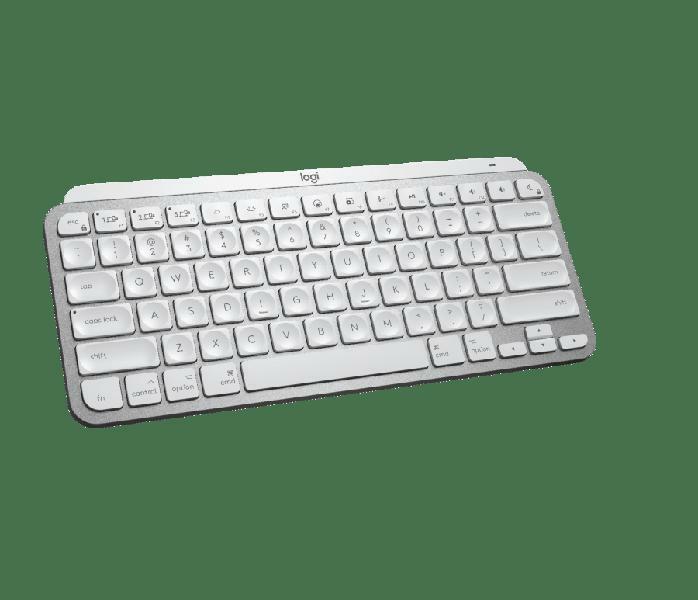 Given Apple’s keyboards are largely superb, most Mac owners might not feel the need to look beyond Apple’s own Magic Keyboard. Big mistake. The Logitech MX Keys Mini for Mac is, for my money, the best Mac keyboard I’ve ever laid my hands on.

The Logitech MX Keys Mini for Mac has a very similar design to Apple’s regular Magic Keyboard. It’s compact, dispenses with the number pad and has the same chrome/white color scheme.

It is slightly wider than Apple’s keyboard (by about 2cm) and this permits Logitech to correct two things that drive me nuts with Apple’s keyboard: the thin Enter and small backspace keys. I frequently find I mishit both of these commonly used keys on the Magic Keyboard, whereas the MX Key Mini has a nice fat Enter key and a slightly longer backspace.

The feel of the Logitech keys is also superior to Apple’s. Logitech goes for the same scissor-switch key mechanism that Apple uses, but there’s more travel on each key. What’s more, each key is concave, neatly cupping your finger, unlike Apple’s dead flat design. Don’t get me wrong - Apple’s Magic Keyboard has a very decent typing action, but the Logitech definitely has the edge.

It’s a sturdy little beast too. The rubber feet and the hefty wedge at the top of the keyboard stop it from sliding around a desk. And while there’s no height adjustment, I find the typing angle just right.

Logitech’s also put a lot of thought into what should go on the row of function keys at the top of the keyboard. The first three function keys allow you to switch between different Bluetooth devices. So, for example, you could pair the MX Keys with a Mac, PC and iPad, and not have to go through the rigmarole of re-pairing the keyboard every time you switched device. For people like me who have multiple devices on the go at the same time, that’s a firm bonus.

Other handy shortcut keys in the top row include one for taking screenshots, another for quick access to the Mac’s emoji menu, and one to mute the mic when you’re on the work Zoom call and your phone suddenly starts playing your Mariah Carey ringtone.

Logitech also makes much of the shortcut key for Apple’s dictation service, although I find that rarely comes in useful. Your mileage may vary, of course.

Aside from that, that top row includes expected shortcut keys for volume, play/pause and keys to control the strength of the keyboard’s backlight... which brings us neatly to the battery life.

If you turn the backligh off - and if we’re being honest, it’s overkill in most office environments - then Logitech claims you’ll get five months out of the battery between charges. Leave the backlight on and that battery life drops dramatically, to only ten days.

I’ve left the backlight on for the past week of testing and the battery is still showing as fully charged. But I’d definitely use the free Logi Options app to switch off the backlight and save the hassle of charging. Logitech provides a small USB-C cable in the box to handle charging.

What it doesn’t provide, however, is a USB receiver. In fact, it’s only compatible with the Logi Bolt USB receiver ($10), so if your Mac doesn’t have Bluetooth, don’t forget to factor in the extra cost.

The keyboard itself costs $99, which is exactly the same as Apple’s Magic Keyboard. If you gave me the choice of the two, I’d take the Logitech MX Keys Mini for Mac without hesitation.

Would I pay $99 to replace a Magic Keyboard I already owned? Probably not, but that doesn’t stop it being the best Mac keyboard I’ve tested.