Thirty years after the Berlin Wall came down, Germany is still working to meet east with west

Thirty years after protesters pulled down the Berlin Wall, the city has knitted itself back together. It has emerged not only as the new capital of reunified Germany (during the split, West Germany’s capital was Bonn), but also as the political and cultural centre of Europe.

Old eastern suburbs like Prenzlauer Berg have become some of the hottest addresses in Germany. Icecream-eating crowds flock to the stirring monument to the Soviet war dead in Treptower Park, while tourists patiently wait in line to pose for photos with giant statues of Marx and Engels in the shadow of the old East German TV tower.

Even the east’s iconic hat-wearing Ampelmännchen (traffic light figure) has managed to colonise the west. Thirty years after mass protests led to the capitulation of East German officialdom and the opening of the Berlin Wall, parts of the old east have not only persisted, they have thrived.

Nevertheless, the old east hasn’t had everything its own way. Symbolically, the East German parliament building, the “People’s Palace” (which also housed theatres, restaurants and a disco, all for public use), was dramatically torn down between 2006 and 2008. This was heartbreaking for many who had fond memories of times spent there.

Somewhat strangely, it has been replaced with a replica of the palace of the German kaisers that once stood there. This colossal monument to Germany’s pre-Communist and pre-Nazi royal past will host a museum filled with colonial-era artefacts (many of a dubious provenance).

Understandably, some East Germans feel that important parts of their past have disappeared down a memory hole. Familiar landscapes and fond reminiscences have been airbrushed out by others eager to view the “two dictatorships” – the genocidal Nazi empire and the Communist East German state – as equal halves of a history of 20th-century German totalitarianism.

More broadly, the effects of change (that is, westernisation) on the old East Germany have been unevenly felt. Material standards of living have clearly risen. Parts of the east have done very well out of the billions of euros that flowed eastward as part of the reunification “solidarity tax”. But structural redevelopment has been a rocky road.

The way in which economic gurus from the west either sold off or shut down East Germany’s heavy industries left many in the “new German states” protesting against what they saw as a form of western colonisation that conspired to keep Germany’s industrial muscle concentrated in the west at the expense of eastern jobs.

The sentiment is understandable, given unemployment has remained stubbornly high in the east ever since reunification. As a result, outside of hipster hubs like Berlin and Leipzig, many young people continue to head west in search of better career and life prospects.

Politically, there are some noticeable differences between east and west. Unarguably, the less multicultural east has played host to an unnerving rise in increasingly brazen far-right extremist activity.

For example, Chemnitz (the old “Karl Marx City”) was the scene of far-right rallies (but also anti-racist counter-rallies) in 2018. Dresden recently declared a “Nazi emergency” as it tries to combat anti-democratic racists who have gravitated to the city. And in recent local elections in Thuringia in the old east, the far-right Alternative for Germany Party (AfD) came in second to the Left Party.

The Left Party, seen as unelectable in the west due to perceived links to the old East German Communist Party, has been a popular government in this eastern state for several years. The old centrist parties of the west, the Christian Democratic Union (CDU) and the Social Democratic Party (SPD), whose governing grand coalition creaks along at the federal level, floundered into third and fourth places respectively at the last election. Elsewhere, in this year’s elections in Saxony the AfD surged to take almost a third of the seats in the state parliament.

This rise of the AfD in the east is noteworthy, but it is not contained to the east. In some ways, looking to the legacy of communism to explain it doesn’t really make too much sense either, given that similar far-right, anti-immigration parties have risen in Austria, Switzerland, Italy, France, the Netherlands, Hungary and Poland.

Notably, the AfD’s most incendiary leader, Björn Höcke, is from the industrial heartland of the west, the Ruhr region.

In terms of recent neo-Nazi violence, although the murderous October attack on a synagogue occurred in the old East German city of Halle, its inspiration seems to have been other racist mass murders such as the Christchurch attack. A believer in the international far-right white genocide delusion allegedly carried out the Halle attack.

Read more: As she prepares to leave politics, Germany's Angela Merkel has left her mark at home and abroad

Another shocking political murder this year, of pro-immigration CDU politician Walter Lübcke, was carried out in the western city of Kassel, allegedly by a long-time member of the West German neo-Nazi scene.

With infrastructure renewed and the standard of living approaching that of the west, the AfD and its extremist fellow travellers represent a real threat to the political life and social cohesion of the old East German states, indeed to all Germans. Pretending that its rise somehow stems from a deep East German nostalgia for authoritarian rule won’t help, particularly given the enormous number of AfD voters who hadn’t been born when the wall came down.

The assumption that the AfD is a legacy of East Germany’s communist past is an example of the patronising attitude of “west knows best” that has irked Germans in the east ever since reunification. 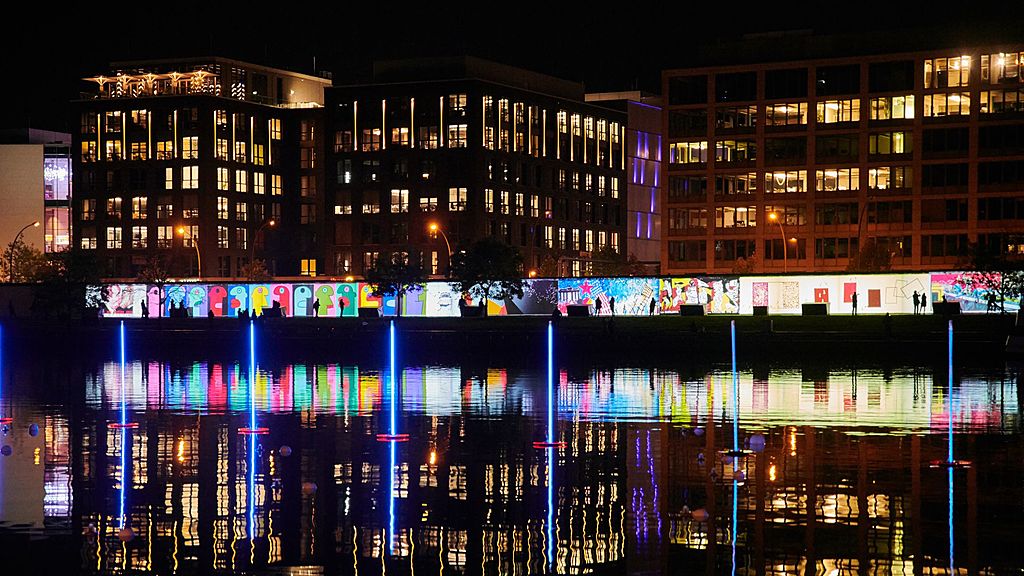 Germany's east still catching up 30 years after fall of Berlin Wall
Wages and business activity lag and nearly a quarter of the original population has left.

Axios
One subscription that gives you access to news from hundreds of sites
Thirty years after its fall, part of the Berlin Wall still stands

Far from the vibrant energy of central Berlin, in an overlooked wasteland strewn with weeds, a small part of the…

France 24
30 years after the Berlin Wall came down, East and West Germany are still divided

Thirty years ago, on November 9, with a sense of momentous events palpable in Berlin’s famous air, East Germans began…