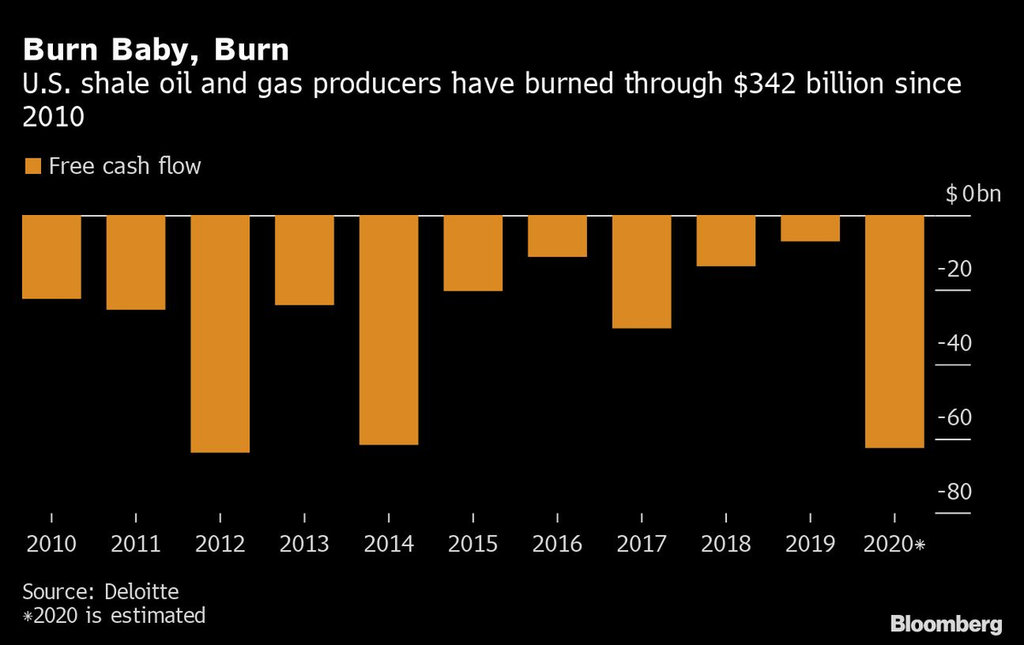 Almost a third of U.S. shale producers are technically insolvent with crude at $35 a barrel, according to Deloitte LLP, highlighting the industry’s acute financial strain even as oil prices rebound from a record low earlier this year.

West Texas Intermediate edged up to $40.06 a barrel at 11:38 a.m. in New York, a substantially higher level compared with most of the last few months, especially April, when prices briefly went negative. But the rebound will do little to prevent 15 years of debt-fueled production growth catching up with many shale producers, Deloitte said in a study. Technical insolvency is an accounting way of saying a company will face problems meeting debt repayments.

“New and unforeseen headwinds continue to jolt the industry’s progress,” authors Duane Dickson, Kate Hardin and Anshu Mittal said in the report. “Although the sub-zero price was a temporary dislocation, this intense volatility highlights the fragile state of the industry.”

Shale was just getting on a more solid footing and learning to live with $50 a barrel oil before the Covid-19 pandemic ripped through global crude demand causing prices to plunge. Now, shale producers may be forced to write down their assets by $300 billion this year, Deloitte said. That’s equivalent to the entire market value of Chevron Corp. and Royal Dutch Shell Plc, the world’s No. 2 and 3 major oil companies.

While the writedowns are non-cash items, they reduce the value of a company’s equity and increase their debt-to-equity ratios, a key measure of indebtedness used by lenders. The shale industry’s leverage ratio would increase to 54% from 40% with the writedowns.

That “can trigger many negative sequences of events, including bankruptcy,” Deloitte said.

The production boom propelled the U.S. to become the world’s largest producer of both oil and gas. But in doing so, companies burned through some $342 billion of cash since 2010, leaving little in the way of returns for investors.

Technical insolvency means a company’s discounted future value at a certain oil price is lower than their net liabilities. Whether or not a company actually files for Chapter 11 bankruptcy depends on breathing room and new credit provided by lenders.