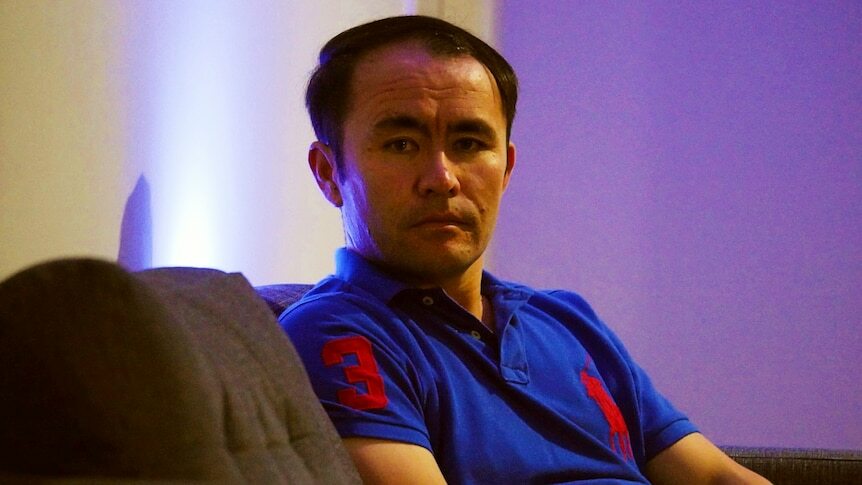 Samim purchased his house south of Brisbane many years ago.

It was meant to be the family home, but now he shares the Logan house with several other adult men.

Most nights he sits in anxious anticipation of news from his former home — Afghanistan — the country where his wife and kids remain.

The 36-year-old is from the Hazara ethnic group and arrived in Australia as an asylum seeker aboard a boat in 2011.

Since 2012 he has held permanent residency and in April 2018 he made an application to bring his family out to join him.

The website told him the processing time was 14 to 17 months, but the family is still waiting.

"I was thinking it is for everyone. When I called they told me 90 per cent of applications are processed in this period of time we put on the immigration website," Samim said.

"I am wondering why my family aren't in this 90 per cent."

He said he was given no information as to why their application was still pending.

Recently, in desperation, his family left their home city of Herat and headed to the Kabul airport to try and leave the country.

"I registered them for the DFAT program and they have been there more than 60 hours at the airport waiting to get in," he said.

The family left just before a bombing on August 26 which killed more than 100 people.

They are now stuck in the city.

"The Taliban are very dangerous. They have been dangerous for Hazara people in the past and have done very bad things. They have stopped buses and killed only Hazaras," he said.

He said most nights he can't sleep thinking about his family and can't focus on his job as a tiler.

"I feel like it [targeted violence] will happen to my family. It will happen to them as well. They are Hazaras and they are not different from other Hazaras."

He said he hopes the Australian government will grant his family and other families visas and help them leave the country.

"When I speak to my family I tell them 'I spoke to immigration today and they said something good is going to happen very soon.' I just give them hope. But I know that the thing I am saying is not the truth."

Many in same situation

Jan (not his real name) arrived in Australia as a 17-year-old in March, 2013 and is now on the Safe Haven Enterprise Visa (SHEV).

His family also waited for several days outside Kabul's Hamid Karzai International Airport to try and seek asylum in Australia.

The 25-year-old said his brother has not left the house since the Taliban takeover in fear they will know he is being supported by someone in Australia and will be targeted.

"I've been here for eight years and still waiting for my permanent residency to apply for them to bring them over," he said.

He said that in 2016 his father was killed following a period of being held hostage after he was taken from his job as a truck driver moving American military equipment.

Forty-five-year-old Ali Shah has permanent residency. He arrived in Australia by boat in May 2012 and worked as a butcher in regional New South Wales before moving to Perth as a bricklayer.

His wife, two daughters and three sons also tried to seek asylum at the airport when the Taliban took Kabul last month.

He said they left their village in Ghazni in the middle of the night and headed to the airport in Kabul.

They are now living in one room in the city, unable to return to their village out of fear of being targeted.

His elderly mother and father were separated trying to cross the Pakistani border.

In 2015 he also applied for a partner visa which would allow him to bring his wife and children to Australia.

He said he has contacted the Department of Home Affairs many times over the last six years regarding the application, but has been told every time it is still processing.

He said if the visa was never granted, he isn't sure he could stay.

"I came here to save my life, my family's lives. If I can't save my family and it is just me safe here, I don't like it," he said.

Concerns about the mental health of Australia's Hazara community

Abhi Kibriya and his wife Razia Ghazal have called Australia home for more than 15 years.

Also Hazara, Mr Kibriya, worked as an interpreter for coalition forces in the early days of the Afghan conflict.

He said he wants to see greater compassion from the Australian government when it comes to reunifying families in his community, where he said people's mental state was deteriorating.

"The total outlook is not so great. They are going through a very dark time at the moment," My Kibriya said.

The third-largest ethnic minority in Afghanistan, he said Hazara people have been persecuted since the 1880s, with evidence of genocide in the early 1980s, the '90s and the early 2000s.

Mr Kibriya said the Taliban are an unpredictable force, and given prior history, he was concerned Hazaras will be targeted by violence and discrimination "once the rules are set".

In May this year, a bomb attack in Kabul killed at least 55 Hazara schoolgirls and in June Amnesty International reported targeted killings and torturing of men as the Taliban took control of Ghazni province.

Since the news that Afghanistan had fallen to the Taliban, Ms Ghazal started painting portraits of Afghan women with iconography that represented their struggles.

She is creating a collection, Women Calling from Afghanistan, to raise money to support women who have fled Afghanistan and are currently sheltering in Pakistan.

She said members of the community are seeing violence "at its worst" unfold on social media, which is further adding to feelings of hopelessness.

Mr Kibriya said he had joined advocates in calling for the Australian government to increase its humanitarian refugee intake to 20,000 places, grant all people on bridging visas as permanent residency and allow those with permanent residency to be reunified with their family.

So far the government has promised to offer 3,000 places within the already existing number of 13,750 available humanitarian visas.

Ms Ghazal said as she was painting, she thought of the women who may be denied opportunities in the future.

"As a woman, as an artist, I stand behind them and support what they're doing," she said.

Carolyn Graydon is the principal solicitor and manager of the Human Rights Law Program with the Asylum Seekers Resource Council (ASRC).

The ASRC has launched a pro bono legal clinic to support the Afghanistan-Australian community.

She said the service has regularly received around 400 calls and 100 emails per day from people from Afghanistan in Australia desperate for information and help.

"Those that arrived in Australia, more than a decade ago, up to 20 years ago, are facing really major challenges because of the legal barriers they face to bring family members to Australia," Dr Graydon said.

"These legal barriers, deliberate, intentional provisions, to cruelly keep them from reuniting with their families."

She said that a directive called Ministerial Direction 80 which was signed in 2013 under the Abbott government has made successfully granting family reunification visas extremely difficult for those who arrived by boat.

"The way it works is that if a person who is a permanent resident refugee who arrived by sea wants to sponsor family members, their spouse or child under the family migration categories, they will automatically and constantly be pushed to the end of the queue," she said.

"As soon as anyone else wants to apply to sponsor their family members who don't fall in that category, they will be immediately put at the front of the queue."

Dr Graydon said it means for many of these people they will never have their application processed.

She said many people have sought exemption to the directive, but there have been no outcomes yet.

The office of the Minister for Immigration and the Department of Home Affairs has been contacted for comment.