There's talk of the threat of war between China and Taiwan, and it's impacting Asian Australians 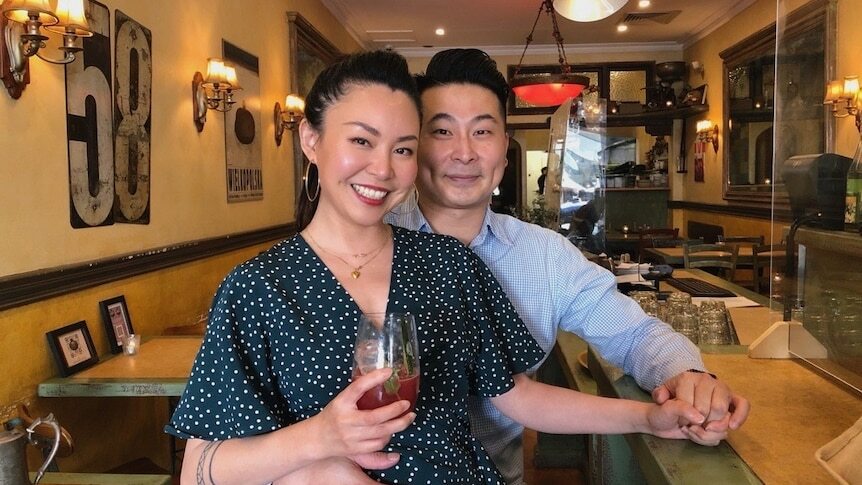 From her Melbourne home, Isabel Zhang has been keeping an eye on the escalating tensions between China and Taiwan, some 7,000 kilometres away.

Over three days, China sent close to 100 fighter jets over Taiwan's defence zone, a buffer outside the island's airspace.

China sees Taiwan as part of its territory, but Taipei sees itself as sovereign. The increasing militarisation in the region and the geopolitical talk of the threat of war has put some on edge.

"Everyone is going to be anxious if there will be a war. As migrants, we are worrying about our beloved family members," she said.

Ms Zhang feels a strong connection with the Chinese and Taiwanese communities in Australia – she was born in mainland China, has lived in Malaysia and Singapore and she married her Taiwanese husband in Melbourne.

"I think it is a political play, and you don't bring politics to the family dinner table," she said.

"Many of us continue to have strong roots to Taiwan. We have close family members — grandparents, parents, siblings, aunties and uncles that live in Taiwan," he said.

"Despite the authoritarian behaviour of the CCP [Chinese Communist Party], I do not believe the people of China actually want war.

"We need to remember our shared humanity."

Ms Zhang, who is a cultural and commercial research specialist, said the Australian Chinese community can be impacted by the over-arching geopolitical tensions.

"It is hard to ignore this issue as our roots, heritage, and culture are bonded to us," she said.

"Chinese Australians come from many different places, like mainland China, Hong Kong, Taiwan, Malaysia and Singapore. We are not part of the politics over there.

"The better way is thinking we are Australian Chinese, regardless of where we were come from."

Fighter jets and 'beating drums' — what's going on in Taipei?

There has been a ratcheting up of war rhetoric in recent months: beyond the fighter jets, Taiwan's Foreign Minister said if China launched a war against Taiwan, Taipei would "fight to the end" and asked Australia for help with security and intelligence.

On the 100th anniversary of the CCP's founding, Chinese President Xi Jinping pledged "complete reunification of the motherland" and vowed to "smash" any "Taiwan independence plots".

This week, Taiwanese President Tsai Ing-wen wrote for Foreign Affairs that the island has been investing in its military arsenal but that it "does not seek military confrontation".

"It hopes for peaceful, stable, predictable and mutually beneficial coexistence with its neighbours. But if its democracy and way of life are threatened, Taiwan will do whatever it takes to defend itself."

In Australia, a new defence pact with the US and UK, including nuclear submarines, has been widely interpreted as a move to counter China.

Earlier this year, Home Affairs Department secretary Mike Pezzullo warned about the "beating drums" of war, and Defence Minister Peter Dutton has said a potential conflict over Taiwan cannot be ruled out.

But Dr Jade Guan, a Deakin University-based strategic expert, said talk of a looming war should not be exaggerated, because the prospect of conflict had been greater during other times in Taiwan’s history.

"In the Third Taiwan Strait Crisis from 1995 to 1996, China launched missiles on small islands around Taiwan," she said.

"We should avoid the war talks, which are completely unnecessary," he said.

"In any situation, Australia will not be the main factor to determine whether there will be war [in the Taiwan Strait]. It is a matter between the US and China."

Lina Chen moved from Taipei to Sydney nearly 50 years ago and believes Taiwan — officially known as the Republic of China — is effectively an independent state.

"The Communist Party has never ruled us. Now they are provocative," she said.

"People in Taiwan are worrying China will take over Taiwan eventually."

She says the geopolitical issue is seeping into local communities, noting that she had been encouraged to sign a petition urging Australia to recognise Taiwan as a country.

A spokesperson from Taiwan's ruling Democratic Progressive Party Oceania chapter said the petition was set up by local community groups and it was "not convenient" for the party to get involved directly, but it was "assisting" with getting the word out.

"It would be great if Taiwan could be independent, just like Singapore," Ms Chen said.

"But it is also OK if we can maintain the status quo so that people from Taiwan and the mainland can be friends,"

Mr Yang said most Western countries, including Australia, recognise the "One China policy", which acknowledges the Chinese government's position that Taiwan is a province of China, while still maintaining trade and cultural ties.

Mr Yang said both governments might use the current crisis to gain domestic support.

The Australian government too could be using national security to look "tough on China" ahead of a national poll, NSW Greens MP Jenny Leong said.

"This is straight out of the John Howard playbook – escalating issues of national security before he went to an election," she said.

"This is a very scary reality, to see an out-of-touch Australian Prime Minister escalating the situation with China and this relationship in this way.

"Any escalation of war and violence and talk of military escalation, or whipping up, of warmongering … has a real impact not just in the countries and the communities where it is the focus, but also on diverse communities here in Australia."

Erin Wen Ai Chew, from the Asian Australian Alliance, said she feared the increasing tension over Taiwan could further deepen the racism Chinese Australians are already facing due to the pandemic and Australia-China trade disputes.

"In the last couple of years, there has been a lot of anti-Chinese rhetoric being thrown around, particularly in Australia," she said.

She said the confrontational talk of war will "exacerbate the racism issue", and a lack of nuance meant anyone of Asian appearance was lumped into one homogenous group.

"Just because we may look Chinese ... we need to pledge our loyalties to Australia, or else we are considered an enemy," she said.

Another problem was that "China experts" commenting on defence and security were "usually middle-aged, white men, a lot of them who hold certain racial privilege, and who actually do not understand the nuance and the cultural sensitivities," she said.

Ms Leong said advocating publicly for peaceful solutions as a woman with Chinese Malaysian heritage meant she was often subjected to racism – just this week she was sent an abusive email calling her "communist trash".

"It's not unusual for me to be accused of being a front for the CCP or the Communist Party, or alternatively, being told to go back to where I came from," she said.

"And I'm assuming they don't mean Adelaide, which was where I was born. And that is a sad reality for people in public life."

She said there should be no place for anti-Asian sentiment in Australia, which was echoed by Ms Chew, who added it was a "misconception" that everybody in Australia of Chinese background was concerned about the events on a geopolitical scale.

"The general vibe is that a lot of Asian Australians are just more concerned with living the day-to-day life and surviving through the pandemic," she said.

In a statement, the Department of Home Affairs told the ABC "social cohesion" was a priority, but did not make reference to tensions between China and Taiwan.

"Asian Australians are an integral part of Australian society and have made a significant contribution to the nation," they said.