There’s a blueprint for stopping Aaron Rodgers, and the Packers should be concerned 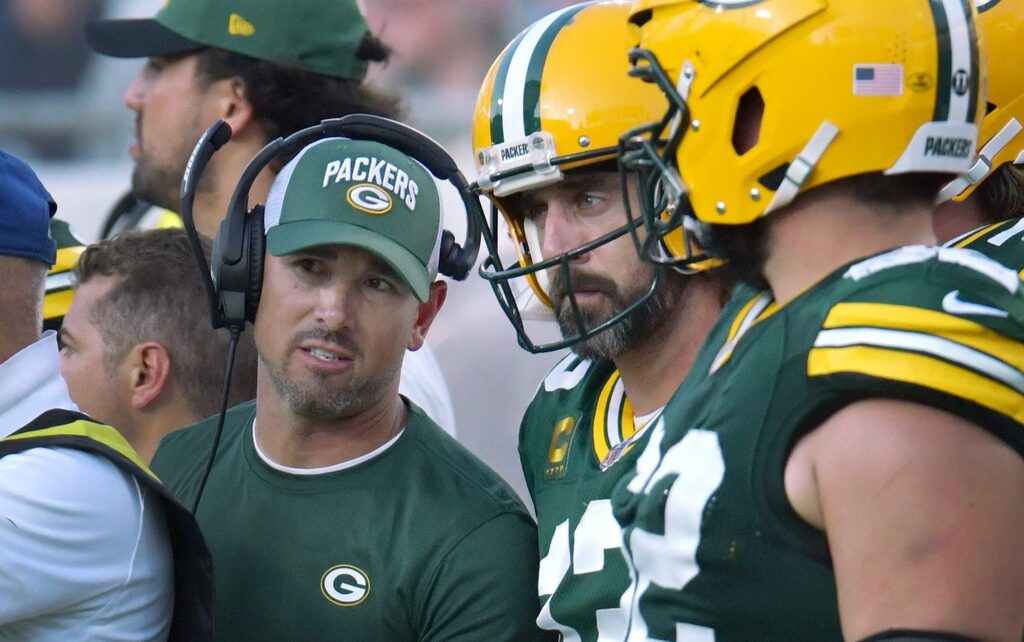 No matter how great a quarterback may be, every one of them has his own personal Kryptonite. For Tom Brady, it’s always been pressure right up the middle. For Aaron Rodgers, at least in 2020, it was coverage in which he faced two deep safeties. This trend not only affected Rodgers’ efficiency and explosiveness; it also drastically affected his best receiver — and perhaps the best receiver in the NFL today. Per Sports Info Solutions, when presented with single-high coverage in 2020 (Cover-1, Cover-3), Davante Adams caught 81 of 99 targets for 971 yards, 574 air yards, a league-high 13 touchdowns, and a receiver rating of 139.8. Against any manner of two-safety coverage (Cover-2, 2-Man, Cover-4, Cover-6, Tampa-2), Adams caught 28 of 42 targets for 335 yards, 238 air yards, two touchdowns, and a receiver rating of 86.9.

The two-deep conundrum obviously started with Rodgers. Against single-safety coverage last season, Rodgers completed 205 of 299 yards for 2,496 yards, 1,346 air yards, 29 touchdowns, two interceptions, an Adjusted Net Yards per Attempt of 9.3, and a passer rating of 123.5.

So, that was the crucible Rodgers faced heading into the 2021 season. If you cover him single-high, he’ll destroy your day. If you counter with two-high, you at least have a chance. And if you can stop the Packers from running the ball effectively against two-high, you have more than a chance.

Interestingly enough, the difference in coverage didn’t really affect Rodgers’ ability to make big-time throws. Against single-high in 2020, Rodgers completed 18 passes on 41 attempts of 20 or more air yards for 631 yards, 502 air yards, six touchdowns, and no interceptions. He averaged 30.3 yards per throw. Against two-high, Rodgers completed 17 of 41 deep passes for 708 yards, 546 air yards, seven touchdowns, and one interception. Rodgers’ average throw depth against two-high coverage was 31.7.

On throws of 0-9 air yards? We’ll be brief. Against single-high, Rodgers threw 18 touchdowns to two interceptions. Against two-high? Zero and zero. There’s a lot of red zone noise in there, but still.

What does this tell us? It may reveal that when Rodgers sees an open receiver downfield, regardless of the coverage, he’s going to use his peerless arm talent to make that throw. But when asked to operate a fully integrated passing game in the intermediate areas with two deep safeties, there’s a disconnect. You may find it unfathomable that a first-ballot Hall-of-Famer would be so betwixt and between with two-safety looks, but again, every quarterback has his Kryptonite. It also tells us that when teams are able to at least limit the damage Adams can do to coverage by bracketing him, Green Bay’s second- and third-level receivers aren’t quite up to the challenge. That’s been a burr in Rodgers’ side for a while now. Based on the numbers and tape, he might have a valid point.

Now, Rodgers was facing a Saints defense that played two-high on 274 opponent passing attempts in 2020, third-most in the league behind the Buccaneers and Browns. In two-high, the Saints allowed just six touchdowns to seven interceptions, and against throws of 10-19 air yards, they gave up just one of those touchdowns to three picks.