There is difference between what PM says, does, says Gehlot; slams Centre over inflation, farm laws 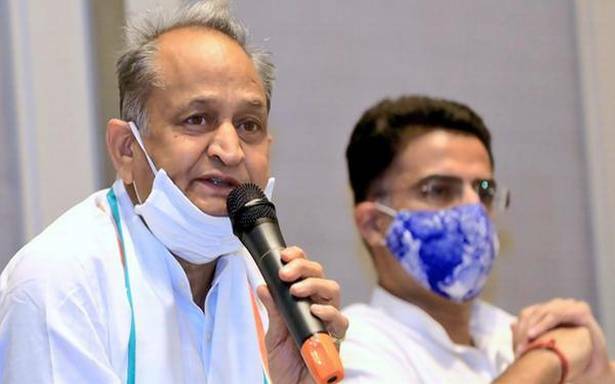 Rajasthan Chief Minister Ashok Gehlot on Friday hit out at Prime Minister Narendra Modi, saying people have understood that there is a difference in what he says and does.

He also targeted the Centre over farm laws and price rise while accusing the BJP of provoking people in the name of religion.

People have understood that there is a difference between words and deeds of the Prime Minister, Mr. Gehlot said at a rally in Udaipur's Vallabhnagar Assembly segment, where bypolls are scheduled for october 30.

Petrol and diesel prices have been constantly increasing and instead of focusing on financial management, the government is earning money from these, Mr. Gehlot said.

Hitting out at the Centre over farm laws, the CM said, "What is going on in the country is in front of all. Farmers have been sitting on a dharna for one year against the agriculture laws. It has never happened in 70 years." "We passed bills to counter the laws but the governor has not forwarded them to the president," Gehlot added.

Mr. Gehlot accused the BJP of not acting in a democratic manner. They are not secular and provoke in the name of religion, he alleged.

Referring to the U.P.’s Lakhimpur Kheri incident, Mr. Gehlot said farmers were mowed down and when Congress leader Priyanka Gandhi Vadra went to meet their kin, which is the duty of the opposition, she was prevented.

Congress general secretary Ajay Maken too targeted the Centre over price rise, saying an LPG cylinder has become expensive by ₹305 in one year but the government is not seeing this because of its utter arrogance.

He said a Minister's son was involved in mowing down the farmers in Lakhimpur Kheri. He was not arrested but the U.P. Police arrested Priyanka Gandhi when she was going to wipe tears of farmers, Mr. Maken alleged.

Addressing the rally, former deputy CM Sachin Pilot said when the BJP was in power in the state, it betrayed people and now as an opposition party, it failed to fulfil its responsibility.

What sentiments the BJP has for farmers, people of the country have seen this, he said Transport minister Pratap Singh also attacked the Modi government on inflation.

He said the victory of the Congress in the Vallabhnagar bypolls will be a slap on Mr. Modi. After Vallabhnagar, the Congress leaders addressed rallies in Pratapgarh's Dhariawad in support of party candidate Nagraj Meena.

The bypolls to Vallabhnagar and Dhariawad have been necessitated due to the demise of the MLAs there.

The polling will take place on October 30 and the counting will be held on November 2.