The Women Bringing Sex Ed to the Arab World

By Mona El-Naggar and Sara Aridi 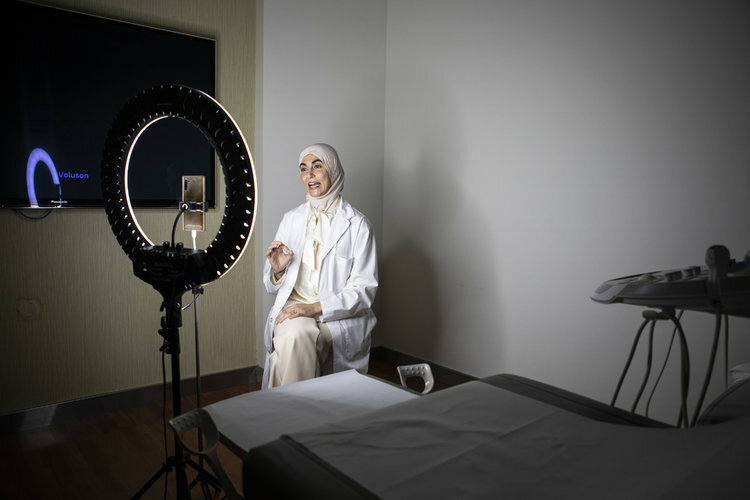 CAIRO — When Nour Emam decided to devote herself to educating Arab women about their bodies, the subject was so taboo that one of her first challenges was figuring out how to pronounce the word “clitoris” in Arabic.

“I had never heard it,” said Emam, 29, a women’s health activist from Cairo. “No one uses it, so there’s nowhere to find the right way to say it.”

After careful research, now she knows, and so do her hundreds of thousands of followers on social media, where she hosts one of the leading platforms for sex education in the Arab world.

With formal schooling on sexuality minimal to nonexistent in much of the Middle East, and a patriarchal culture that has left many Arab women ignorant and ashamed of their own bodies, Emam and a growing number of activists have built online platforms to try to fill the gap.

Using the internet to circumvent social taboos and government censorship, they are educating Arab women about their bodies, shattering myths and misinformation, and in some cases changing women’s lives. ​

In Cairo, Emam, known by the web handle “motherbeing,” has posted hundreds of videos on Instagram and TikTok in which she discusses intimate subjects in a deliberately casual manner, sometimes while she’s cooking. She started a podcast on sexual and reproductive health in March; the first episode, on orgasms, drew tens of thousands of listeners.

The website Mauj — a pan-Arab project run by women in several countries — publishes educational posts on sexual and reproductive health and sells mail-order vibrators, which are banned in many Arab countries.

“Sex Talk in Arabic,” produced by a group of Arab women in the Middle East and expatriates, has drawn tens of thousands of followers on Instagram and Facebook for its sex ed graphics and videos and LGBTQ advocacy. “Our main goal is to break down taboos and break down myths,” says its founder, Fatma Ibrahim, 32.

Physicians like Dr. Sandrine Atallah, a sexologist in Beirut, and Dr. Deemah Salem, an OB-GYN in Dubai, United Arab Emirates, are taking to YouTube and Instagram to debunk myths and stereotypes about sexuality that are common throughout the region, like the belief that using a tampon takes away a woman’s virginity.

“It’s a moment,” said Nancy Ali, a research associate at Sorbonne University in Paris who specializes in the study of gender and memory in the Middle East and North Africa. “Our culture and our language regarding sex is extremely euphemistic, so the idea of discussing sexual body parts in this direct way is new to us, let alone the fact that women are doing it.”

At a time when social media is under fire for spreading misinformation, these initiatives and others like them are using the platform to counter misinformation, exploiting social media’s ability to cut across class and national boundaries to reach Arab women throughout the region and beyond.

Taken together, advocates say, these sites and platforms may be the leading edge of a cultural shift, a kind of an “Our Bodies, Ourselves” revolution for the Arab world, but 50 years later and on your phone.

Arab states lag far behind most of the world in gender equality, including in the realm of reproductive health and sexual education.

About 40% of pregnancies in Arab countries are unintended, according to a 2018 study by the Guttmacher Institute. Female genital mutilation is prevalent in several countries. The region’s teenage birthrate is higher than average.

And according to a United Nations study, not a single Arab country offers comprehensive sex education in schools. Tunisia, one of the most socially liberal Arab countries, introduced a free sex ed app last year, but plans for a school sex ed program have stalled.

The new social media platforms are stepping in to provide factual information and a woman’s point of view in an arena where patriarchal traditions, conservative religious doctrine and, more recently, online pornography have set the tone.

While their approaches vary, most focus on education about female anatomy, sex and dismantling mores seen as harmful to women.

One primary target is the religious belief that women have a duty to oblige their husbands’ every sexual desire, a duty rooted in the saying attributed to the Prophet Muhammad that “the angels curse” a woman who refuses her husband. The activists seek to replace this notion with a consent-based approach.

Another bubble they aim to burst is the popular conception in the Middle East that attaches family honor to a woman’s virginity.

There has been pushback from conservatives, usually in the form of comments replying to the posted articles or videos.

Norhan Osama, 24, a customer support rep from Giza, Egypt, said that she appreciated the need for education but was concerned that these platforms take away “the shame and embarrassment” of doing something wrong.

“If you’re not firm in your beliefs, you might walk away thinking it’s OK to have sex when you’re not married,” she said. “It’s sinful. That’s the simple answer.”

Perhaps the biggest difference with previous iterations of Arabic sex advice columns and TV programs is that the new platforms prize openness. They are without exception blunter and more explicit.

For Emam, speaking openly about women’s sexuality — including getting women accustomed to hearing the word clitoris — is part of a broader mission to break what she described as an intergenerational cycle of trauma that has led many Arab women to feel like “our existence is wrong and shameful and sinful.”

Not saying the word, she said, “was another way of distancing ourselves from truly connecting to our bodies, our heritage and our roots.”

Emam was a full-time techno music DJ before she became a mother and developed postpartum depression, which led her to train as a doula, a professional who supports women giving birth, and from there to focus on reproductive health and sex education.

She is based in Egypt, but said that about 25% of her social media followers come from other countries, including Saudi Arabia, Iraq, the United Arab Emirates, Jordan and Morocco.

The effort appears to have filled a need.

Sarah el-Setouhy, 30, a petroleum economist in Cairo who attended Emam’s “Mastering Your Cycle” class via Zoom, said she had suffered from painful periods. She said she had been taught “to just live with it” and, a common myth, that the pain would subside when she got married and had children.

Emam told her that the pain could be caused by a number of factors and encouraged her to see a doctor.

“She gives you the confidence to understand your body,” el-Setouhy said. “I have worked a lot on myself since then.”

Bit by bit, such exchanges will transform society, Emam contends.

“I think women have started to wake up,” she said. “And we’ve amplified each other’s voices.”

Mauj (“waves” in Arabic) was founded last year by two 32-year-old women who asked not to be identified over fears of repercussions over their work. When they were growing up, the founders said, neither of them received sex education beyond a quick word on menstruation and warnings not to get pregnant.

In an effort to create “a judgment-free space” to talk about topics long suppressed, Mauj has a video series inviting women to share their experiences anonymously with issues like sex, body shaming and sexual harassment.

Vibrators are not openly sold in Arab countries, and some nations strictly forbid them. The United Arab Emirates, for one, prohibits them under the ban on “items that contradict Islamic faith and public morals.”

Salem, the Dubai OB-GYN, created an Instagram account aimed at conservative, Muslim women who are too shy, embarrassed or afraid to see a gynecologist in person.

“In the Middle East, there is this misconception that girls really should not see the gynecologist until they get married,” she said. “Many go years without visiting one — if at all — over fear that undergoing a pelvic exam would lead to a loss of virginity.”

Women and girls send her questions over Instagram, and while she cannot give treatment or diagnoses over the app, she offers general advice, knowing that many of her correspondents may never visit a clinic.

Another common problem she has found is that the emphasis on celibacy before marriage, often instilled through fear, can carry over into the marriage. A virgin suddenly finding herself lying next to her husband on her wedding night, she said, may be overcome with fear and discomfort, which can manifest physically in vaginismus, a condition in which vaginal muscles involuntarily contract during penetration.

For some women, the new platforms have changed their lives in small but powerful ways.

Salma, 32, an Egyptian high school teacher who preferred not to use her last name, said a class she took with Emam left her feeling more comfortable about her body.

When she gets her period, for instance, she no longer feels the need to conceal a pad on the way to the bathroom. “Because why do I have to hide?” she said.

She has found her body to be a source of pleasure.

And she knows the name for it in Arabic.