The wildfires burning in the Southwest are bad but 'not unprecedented'

Fanned by erratic and unpredictable winds and growing by more than 90,000 acres in the past week, Calf Canyon-Hermit Peaks fire has already burned more acres than burned last year in all of New Mexico.

Spring is historically a busy time for wildfires in the Southwest, before the summer monsoons arrive around the Fourth of July, if they do. But this year, as in recent ones, large fires began igniting in the region at least a month early due to an extended drought made worse by human-caused climate change.

Scientists say much of the West is experiencing its driest conditions in 1,200 years

In fact, scientists now say much of the West is experiencing its driest conditions in 1,200 years.

"From a fire perspective, the dice are now loaded for another big fire year in 2022," says Park Williams, an associate professor in geography at UCLA. "It's likely that 2022 is going to go down as another year that reminds us that fire is inevitable."

Williams is studying the fallout of the current 23-year megadrought in the western U.S. by examining volumes of tree rings and other data from remote forests around the region. Scientists now know that extraordinary droughts like this one were quite common in the West historically. It's thought that much of the 20th century was actually an anomaly because it was relatively wet.

That time coincided with an explosion of development into wild ecosystems dependent on periodic fires, and also a still-standing U.S. government policy to stamp out nearly every new wildfire ignition.

"We did a great job for a 100 years stopping fires. But despite our best efforts, we are losing control of the fire regime in the West," Williams says. "There are too many trees and it's too warm and things are drying out and we're getting a lot of fire."

Fire scientists predict another long, expensive, destructive and smoky summer. There's little to no indication that things will improve in the coming years either. But experts caution about calling this current crisis - where upwards of 10 million or more acres is burning in the lower 48 states every year - unprecedented. In fact, look back toward the beginning half of the 20th century even, and total acres burned tended to be much higher.

"There are more people in the path of these fires, and that can make them more destructive. But look back towards the past and [you] see the size and ferocity of fires that have taken place just within the last century," says Lincoln Bramwell, the chief historian for the U.S. Forest Service.

Lately in the scientific community and the news media, the term megafire has emerged as way to describe blazes like Calf Canyon-Hermits Peak or the deadly 2018 Camp Fire that destroyed most of Paradise, California. But historians like Bramwell bristle a bit at this because it suggests they're unprecedented when they're really not: I1871, for instance, the Peshtigo Fire roared through the Wisconsin forest killing some 1,200 people. In 1910, a complex of wildfires dubbed the Great Burn burned three million acres in one summer from southeast British Columbia to western Montana.

Before the U.S. government got so good at wildfire suppression, Bramwell says, it was typical to see twenty to thirty million acres of forests burn in the West.

"Culturally we have a hard time wrapping our heads around that because we've kind of expected that this doesn't happen," he says. "And if it does happen, there are a lot of resources that will come out and try to save the day."

The game changer, however, is climate change, which will likely make these modern fires much worse. Previous mega droughts like these did not occur at a time when the atmosphere was being warmed by human activity. Hotter, longer summers brought on by climate changes have lengthened fire season by 30 to 45 days across much of the west. So there's a good deal of uncertainty about what the future will bring. But most fire managers on the ground are bracing for the worst and trying to manage the public's expectations, as a result.

Firefighters can't be expected to stop wildfires amid this unusually warm, dry and windy spring

In Boulder, Colo., which has already seen a number of close calls amid this unusually warm, dry and windy spring, the city's wildland fire chief, Brian Oliver, says firefighters can't be expected to stop wildfires.

"I equate that to trying to fight a hurricane," he says. "We don't mobilize a force to go turn around a hurricane, we get everybody out of the way and then we try to come back in and clean up after."

And the times that a wildfire is caught and put out early on, that just leaves more fuels on the ground for the next inevitable ignition. UCLA drought expert Park Williams says the country's legacy and success of putting out fires has now backed us into a corner as the western drought persists.

"Unfortunately, we're finding that a lot of these places that we have now sunk a lot of resources into protecting and invested a lot of human capital into living in, those places are becoming very unsafe to live in because of the rapidly accelerating fire risk," Williams says. 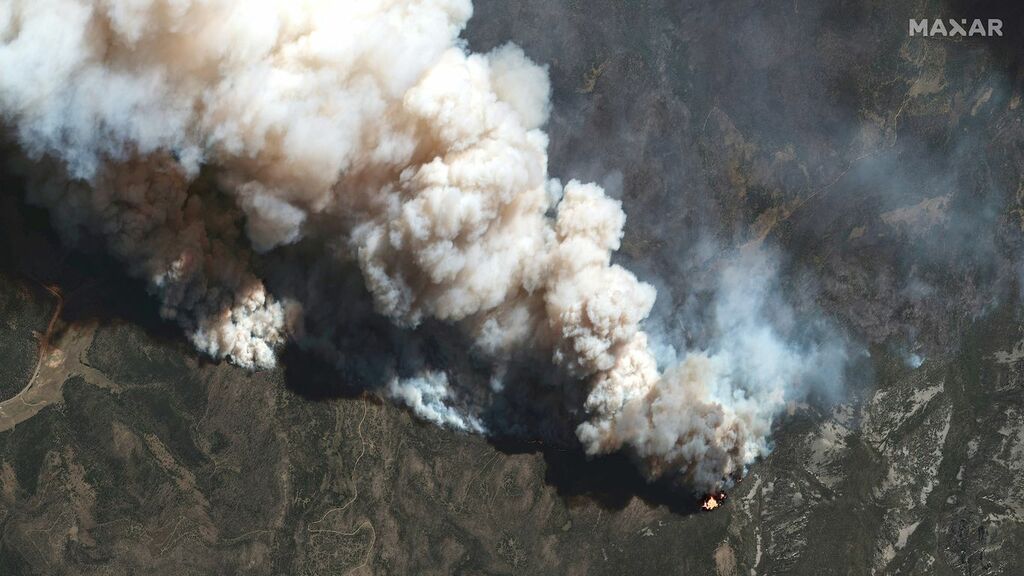 Calf Canyon wildfire becomes largest in New Mexico history
The fire surpassed a 2012 blaze for the top spot, and it is still growing.

Axios
From analysis to the latest developments in health, read the most diverse news in one place.
‘Nothing to go back to’: the way of life lost to New Mexico’s historic fire

The Guardian - US
Climate change is heating up Florida. That could bring more wildfires, new report warns
MIAMI — When Hurricane Michael tore through North Florida in 2018 as a Category 5 storm, it left more than…