Having failed to make much progress in getting the concept to work, with the W13 beset by porpoising problems, the Barcelona event is key to its future.

With Mercedes having a wealth of data from pre-season testing that took place with its launch spec sidepods, direct comparisons of performance will deliver some key indicators about what direction the team should take with its car.

The more the team has dug into the W13's issues, the more it suspects that core to its problem is the fact that the zero-pod idea has exposed much more floor area, which is especially sensitive on the 2022 ground effect machines.

As Mercedes boss Toto Wolff said in Miami: "If you walk through the grid, you can see that our floor edges stick out much wider than anybody else's. That gives it a different way, or much more scope, of possible instability.

"I think that's where our concept varies. Clearly the Barcelona launch car is much slower on paper, but we need to find out how we can make the current car work predictably for the drivers."

Mercedes' solution does indeed expose more of the floor, which in turn gives more freedom to the airflow passing around the car, spreading the load being created across a much wider section of the floor.

For Mercedes, this appears to create porpoising at lower speeds than some of its rivals. The ill effects caused by the phenomenon therefore starts earlier than the opposition, and then also outlasts them, with recovery not occurring until Lewis Hamilton and George Russell are much further into the braking zone.

Given that all of the teams have been suffering with porpoising to one extent or another, after pre-season testing the FIA allowed teams to install a single stay either side of the car, ahead of the rear wheels, for the start of the campaign.

In Mercedes' case, this metal stay appears to be significantly longer than its counterparts, as it's not passing through any bodywork (inset, red arrow above).

The introduction of these stays has also helped some teams in regards to the weight loss plans they are undergoing, as they can trade in some of the weight incorporated in the floor, which had been helping to reduce flexure, for a stay.

However, where Mercedes appears to be disadvantaged by its concept, when compared to the rest of the field, is the inability to install 'hidden stays'.

These stays, as we can see in the images of the Red Bull (below) and Ferrari (above) are housed within the sidepod bodywork and help support the floor at a midpoint, closer to the car's centreline.

As they aren't exposed to the external airstream, they're not subject to the same criteria as the pair of stays permitted at the rear of the car.

Some teams have multiple stays or, as is the case with Red Bull, a more complex cantilever style arrangement to help spread the load across the floor's surface.

Mercedes has frequently fielded questions in regards to its sidepod arrangement and the prospect of returning to the design used during the first preseason test, given it's very different to everyone else's design.

However, much like the questions posed about the diva-like behaviour of its long wheelbase, low rake philosophy in 2017, which again was at the start of another major regulation change, the problem is a little more complex than just one specific design trait.

Let's not forget that porpoising was an issue for Mercedes during the Barcelona test as well. And whilst the older solution would undoubtedly alter the aerodynamic characteristics of the front portion of the sidepod, the rear section is just as slender and exposes the floor to the airflow in much the same way (see the main image).

There's also the dilemma of how you would walk back or incorporate the updates that Mercedes has introduced throughout the course of the season so far.

Nonetheless, it appears the team is aiming to understand not only how to recover and improve during this season, but also in what direction it must take in the development of next year's challenger, a project that will already be underway. 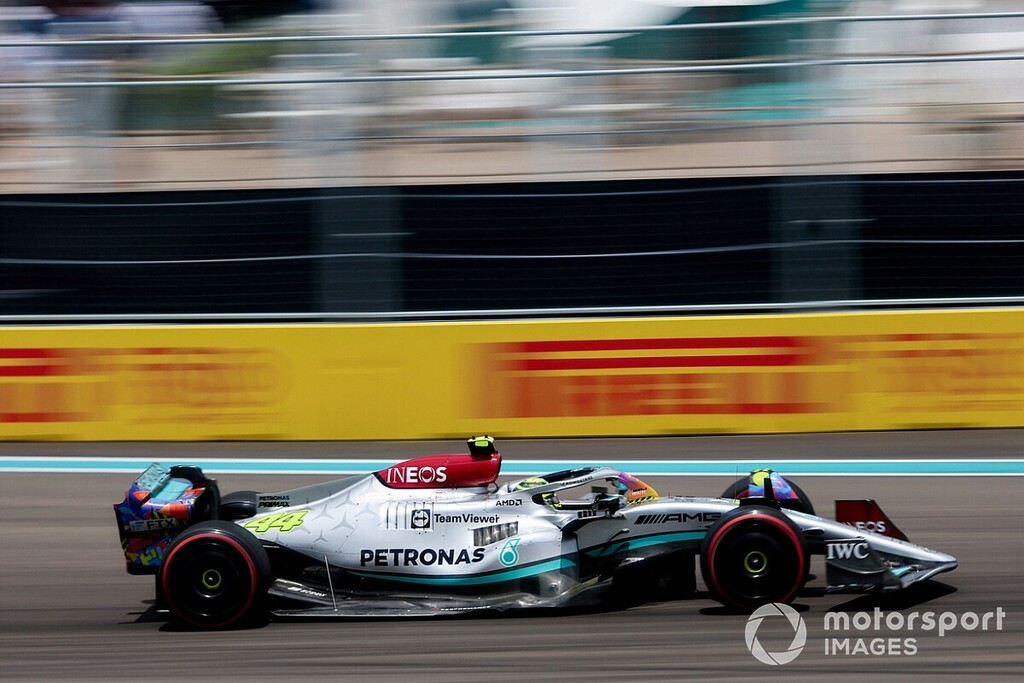