The European Union has warned that it will “respond with all measures at its disposal” if the UK goes ahead with a plan to unilaterally rewrite the most contentious part of their Brexit agreement, sparking fear of a trade war.

How did the two sides once again end up at loggerheads and what is the UK threatening to do? Foreign secretary Liz Truss has made a statement to parliament setting out her intentions on the matter. This is what we know so far.

What is the protocol?

The UK government’s decision to leave the EU single market and customs union after Brexit left both sides with a problem. It was committed to keep the border with Ireland frictionless (by ensuring people and goods could flow freely between Northern Ireland and Ireland), which would be practically impossible after leaving EU’s trading area. The question therefore became how the UK and the EU could keep the Irish border free of any physical infrastructure without jeopardising the integrity of the EU single market.

There were always two realistic solutions to the problem. The UK as a whole could remain within the EU’s regulatory orbit – at least with regard to the free movement of goods or it could accept that Northern Ireland would have a closer relationship with the European Union than the rest of the UK. Former prime minister Theresa May opted for the first model while Boris Johnson decided to choose the second.

This led to the adoption of the Protocol on Ireland/Northern Ireland, which Johnson himself negotiated and signed. Members of his cabinet even characterised it as a “cracking deal”.

So far, these unavoidable frictions have been largely addressed by allowing for grace periods. Major retailers do not currently need to comply with all the EU’s usual certification requirements, for instance, when importing goods such as food from the rest of the UK. However, these grace periods may expire at some point, leaving uncertainty over the rules. There is a concern that businesses will quickly become overwhelmed by complex bureaucratic requirements when trying to move goods between Great Britain and Northern Ireland.

What has changed on the UK side?

In a statement to the House of Commons, Truss confirmed that the UK government now wants to change the terms of the protocol, declaring it unworkable.

She argued that the frictions in east-west trade have undermined the economic and constitutional relationship of Northern Ireland with the rest of the UK and said that the unionist community in Northern Ireland does not support the set-up.

According to the government, this has led to a political paralysis in the region. It is certainly the case that the Democratic Unionist Party has blocked the formation of a new government (and the functioning of the Northern Ireland Assembly) following recent elections, refusing to take part in the power-sharing institutions until the protocol has been significantly revised.

Despite having been aware of the consequences of the protocol and the potential for such opposition to the agreement at the time of arranging it, the UK government now says it plans to bring forward fresh legislation to unilaterally amend the protocol. However, the details remain unclear and no date has been set for the legislation to be presented to parliament.

Will the UK government’s manoeuvres work?

The very existence of grace periods could be seen as a tacit admission of the fact that a strict application of the protocol could lead to significant frictions in the trade between Great Britain and Northern Ireland. This is why the European Commission proposed a package of amendments to the protocol last October. These were intended to be negotiated by both sides and had the potential to result in a concerted and consensual diplomatic effort that could have reduced trade friction. The government has rejected them, however, noting that those proposals “would go backward from the situation we have today with the standstill”.

Such a consensual approach, of course, would have been very different from what the UK government is now suggesting – the unilateral re-writing of swathes of this international agreement.

Nor is it even clear how breaching these international obligations will foster an environment in which power-sharing in Northern Ireland can be restored. Even if the DUP is appeased by whatever emerges from the re-drafting (and the EU experiences a damascene conversion and does not react) one has to wonder whether Sinn Féin – now the largest political party in Northern Ireland – would consent to such unilateral amendments by entering the executive.

In a recent article, Johnson has urged all sides to “embrace that hybridity” in the debates about Brexit and the protocol. Indeed, it is difficult to imagine a more hybrid regime than the one that Northern Ireland enjoys. It follows the UK internal market rules when it comes to free movement of services, people and capital but has a much closer relationship with the EU when it comes to goods. It is far from a perfect solution but it is a pragmatic arrangement that avoids the resurrection of a hard border on the island of Ireland. In fact, the majority of the recently elected members of the Northern Ireland Assembly consent to its existence.

It therefore seems clear that all parties should work in a consensual and cooperative way to improve the application of the protocol so that everyone in Northern Ireland, whichever community they identify with, can buy into the arrangement. Politicians in Westminster, Belfast or elsewhere must not resort to instrumentally using ethnic divisions as leverage for other political goals.

Nikos Skoutaris consulted the GUE/NGL parliamentary group of the European Parliament for Brexit-related issues during 2017-2020. 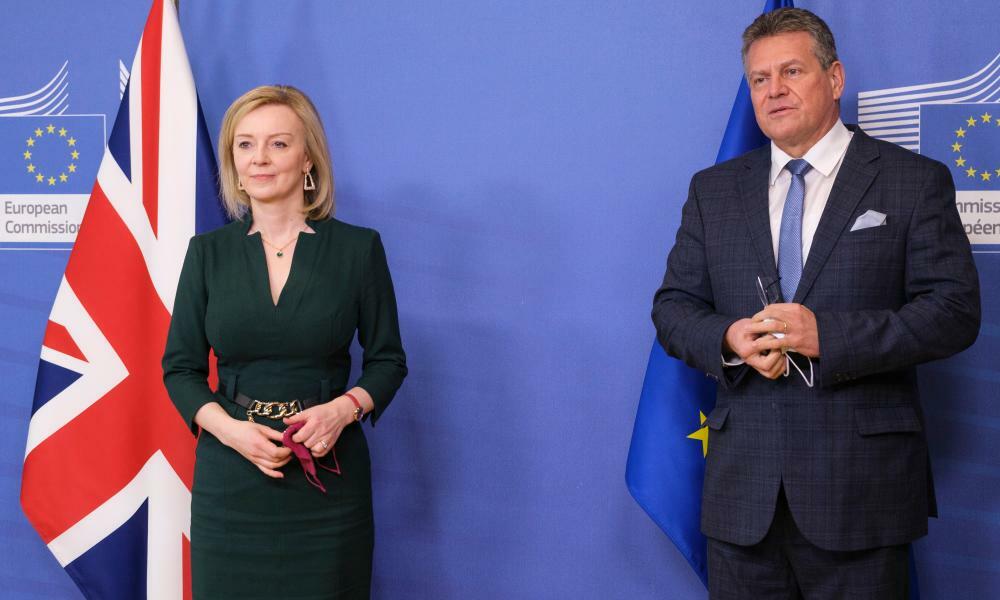 The Guardian - UK
One subscription that gives you access to news from hundreds of sites
UK to table bill to scrap Northern Ireland Brexit protocol, Liz Truss says

Bloc will ‘respond with all measures at its disposal’ if Truss ditches NI protocol, says commission president