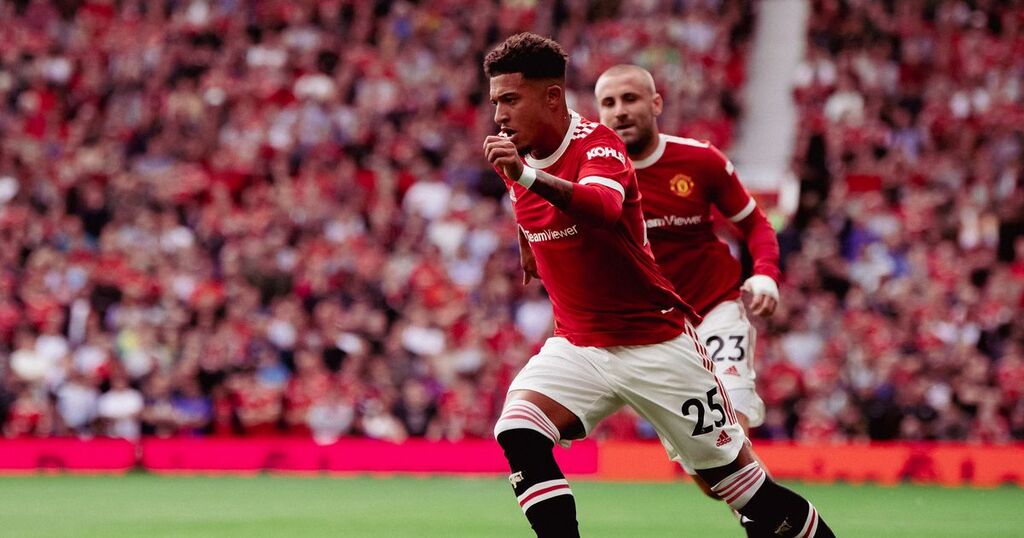 Jadon Sancho’s Manchester United career has not got off to the start he or the club would have wanted.

After a two-plus year pursuit, United and manager Ole Gunnar Solskjaer finally secured Sancho this summer for £73million from German side Borussia Dortmund.

Making his debut off the bench in the opening game of the Premier League season against Leeds United, the England international has only started four of United’s 10 games in all competitions and completed 90 minutes just the once.

On his slow start, Sancho said last month: "I'm going to keep playing my game. I'm not going to change what I've been doing over in Germany. I've just got to bring it here and hopefully, I can show the fans what I can deliver."

Coming off the bench in the last game before the international break, Sancho showed glimpses of what the world saw while in Germany’s Bundesliga and teammates and former United players and managers have weighed in on why the 22-year-old will come good in Manchester.

What the pundits have said

Former United defender Gary Neville took to his Sky Sports podcast to single out Sancho’s performance against the Toffees.

"You come away from that game and everyone was disappointed, but I thought Jadon Sancho gave his best 20-minute performance in a Manchester United shirt.

"I thought that was the one big positive from the match. Sancho got on the pitch after a difficult start and I think Man Utd fans are still working him out and still getting to know him, and he’s still working out Man Utd."

Ex-United Women’s manager Casey Stone y was on punditry for the only game Sancho played 90 minutes in, a 1-0 defeat to West Ham in the Carabao Cup.

Stoney said Solskjaer won’t be worrying about his price tag, telling Sky Sports: "As a manager you don’t care about the money, you’ve acquired a great asset. You’ve got strength in depth. What Ole will want now is two players in every position and he’s got that especially in that top area. Mason Greenwood is one of the best finishers in the club, Ole’s said that before.

"He’s going to have a fight to make sure he consistently plays but I think that’s a good thing for a manager."

What his teammates have said

United and England teammate Jesse Lingard took time out of his preparation ahead of the Three Lions game against Andorra to tell the media while it won’t be instant, Sancho has the talent to turn things around.

"I think it's going to take some time to adapt.

"Jadon's been around long enough, he knows football inside out and the Premier League can be tough. He's adapting. We've seen glimpses. He's only going to get better. We have full confidence and hope in Jadon to succeed."

Luke Shaw, also on international duty with England, said that Sancho isn’t struggling and tipped him to go all the way to the top.

Speaking to talkSPORT, Shaw said: “Sometimes, for people, it takes time. But I wouldn’t say he’s struggling at the moment.

“He’s working extremely hard behind closed doors and training really well and looking really sharp. He just hasn’t had that bit of luck that sometimes you need for your first goal or first assist.

“But I’ve got no doubt in my mind, it’s coming. The talent he has is unbelievable, he can go right to the very top.

“It’s just about him staying focussed, keep doing what he’s doing in training and working hard. His time will come.”

What the manager has said

Though Solskjaer didn’t start Sancho in the 2-1 victory over West Ham in the Premier League last month, the Norwegian did say that Sancho’s slow start hasn’t altered his thinking in terms of how good he will be for United over the next decade plus.

“He’s learning all the time.

"As I said in training as well, he’s learning our methods, he’s learning the Premier League and of course, he knows the Champions League already from being at Dortmund.

“He’s so clean on the ball and is enthusiastic to learn and that is such a big thing when you come to Man Utd. You’re always going to get a chance and you play with some of the best players in the world, you’re getting some fantastic coaching with the coaches I’ve got too.”

“Jadon was exceptional on Wednesday against Villarreal,” said Solskjaer.

“He was electric and the crowd loved him. I think he felt that connection with the crowd.

“That's what we want from him - to be direct, positive, go past players numerous times.

“Yeah, he’s not scored yet, but that night I thought: 'yeah, that’s Jadon and we’re going to see loads of that'.

“He will be a top player and performances are going to come. We’ve got players here he can learn from and help him adapt.”

Agree with what's been said about Jadon Sancho? Let us know in the comments below and online @ManUtdMEN