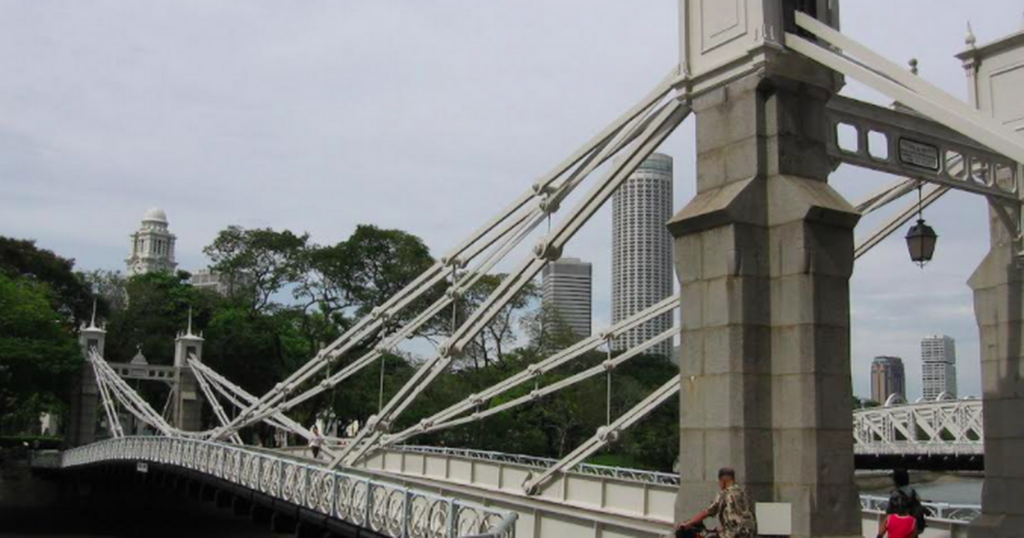 As it happens, however, one of the Southeast Asian city-state’s top landmarks is a Clyde-built bridge, constructed at the height of British imperialism more than 150 years ago.

Situated at the mouth of the Singapore River and originally providing a connection between government offices on the north bank and the commercial district to the south, the Cavenagh Bridge opened in 1869 to mark Singapore’s new Crown colony status.

And, while it’s the oldest bridge to still span the Singapore River in its original form, the steel structure is as Glaswegian as they come.

Controversial as the last major Singaporean structure to be assembled on site by Indian convict labour, the bridge was exported in 1868 by engineering firm P & W Maclellan, based almost 7,000 miles away on the Clyde.

The firm, founded in 1811, was a major employer in the Glasgow area and, aided by the continued expansion of the British Empire, examples of its then state-of-the-art engineering survive all over the world.

But, despite the Cavenagh Bridge’s Clyde-built origins, the 80-metre-long structure’s first known name was the Edinburgh Bridge, the moniker coined to commemorate the visit of the Duke of Edinburgh.

The misleading title was eventually consigned to the history books, and the name was altered to Cavenagh Bridge in honour of Major General Orfeur Cavenagh, who governed in Singapore from 1859-67. The Cavenagh family coat of arms adorns the bridge to this day.

It’s recorded that P & W Maclellan built and tested the Cavenagh Bridge to withstand an overall load four times its own weight.

But, while this extra strength allowed the bridge to cope with the growing number of rickshaws and ox carts in Singapore in the late 19th century, the sheer influx of trade into the fast-growing urban area would prove to be too much for it to handle.

Separately hindered by its low draught, which restricted river traffic, Cavenagh Bridge surrendered its vehicle traffic to the new Anderson Bridge in 1910. It was fortunately spared from demolition and converted for pedestrian use instead.

A vintage police notice remains on the 9.5-metre-wide bridge today, restricting the passage of vehicles - livestock included - that weigh more than 152kg.

Considered by heritage experts as one of the country’s most important architectural landmarks, the Cavenagh Bridge was designated a National Monument of Singapore in 2019.

An iron marker denoting the Cavenagh Bridge’s 1868 Glasgow birth is displayed prominently along its side.