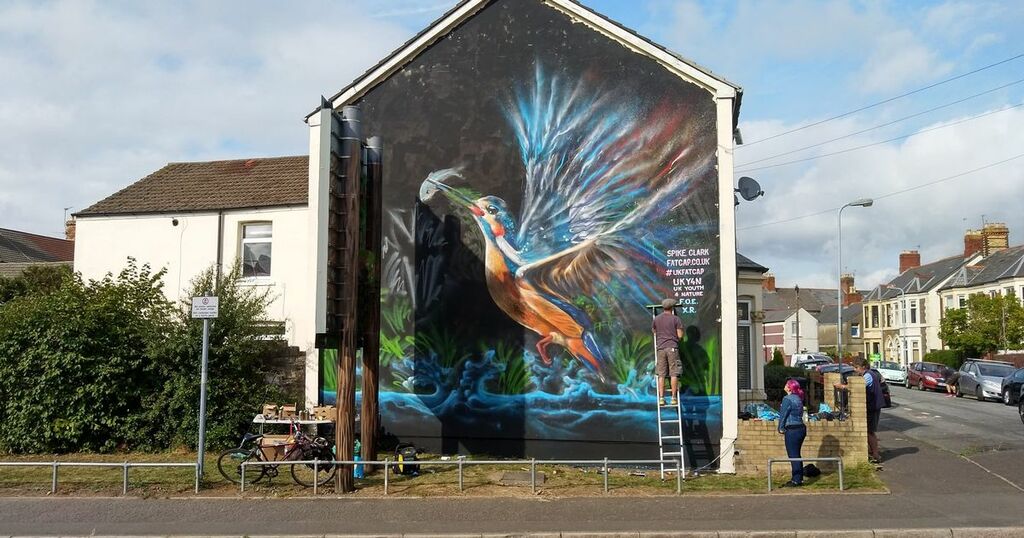 This is the stunning and latest new mural in Cardiff.

The Wild Wall appeared in Canton and was created by artist Spike Clark.

It is one of several murals across the UK by youth environmental group UK Youth for Nature (UKY4N).

Read more stories about the arts and culture

Each wall highlights a specific endangered species. The Cardiff mural depicts a kingfisher, an unmistakable and rare bird which is on the UK's amber list for conservation. The species has faced long-term population decline since the 1970s, primarily due to river pollution from industry and agricultural run-off.

Located in Atlas Place, Canton, has been supported by Friends of the Earth Cardiff, Cardiff Extinction Rebellion, and Green Squirrel.

Members of the public are invited to post pictures of the mural using the hashtag #wildwalls. There is also a QR code to scan, which will provide the public with more information about the campaign.

In the run-up to the COP26 climate conference, which will take place in Glasgow from the end of October, UKY4N will be lobbying politicians to take urgent action which tackling the climate emergency.

RSPB chief executive Beccy Speight said: “Climate change is one of the greatest threats to nature, but restoring natural ecosystems is also one of the best ways to tackle the climate crisis and to restore ailing species.

"Young people have been some of the most ardent and persistent campaigners for action on nature and climate. Natural Kingdom: Wild Walls is an amazing celebration of the UK's wildlife and its young people.

"It will also be an important signal to politicians and world leaders gathering in Glasgow in November, and to people on the ground in our cities and towns, to take these issues seriously, and to both imagine and ensure a more biodiverse future.”

41% of species in the UK are declining, with 13% of these at risk of extinction. Climate change is one of the main drivers of the loss of wildlife across the countryside .