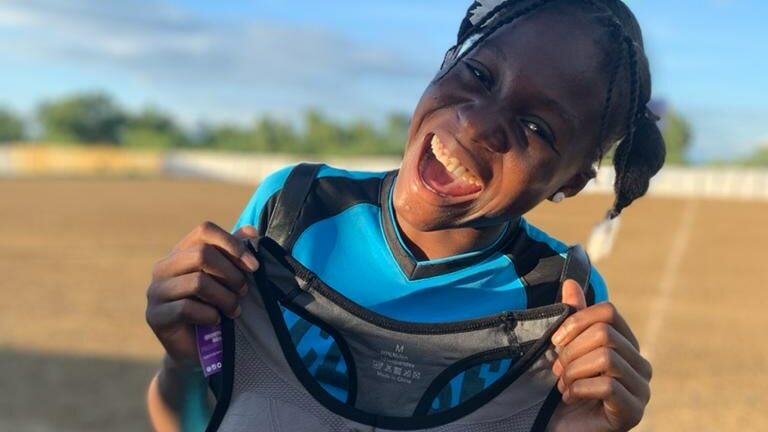 When it comes to getting a sports bra, most women would pop to the shops and buy what they need.

But what if you didn't have the time, money or freedom to do that, and it created a barrier to playing the game you love?

It's a reality here in Australia, and many countries abroad.

And for New Yorker Sarah Dwyer-Shick, it was one basic need that wasn't being addressed, that she knew she could do something about.

In 2018, she created the Sports Bra Project. It's now a non-profit that distributes sports bras to women and girls who don't have access to them, removing that barrier to participation.

The project has given out about 7,000 brand new sports bras to women and girls in 30 different countries.

"It's something that my mum can relate to because she never had a sports bra," Dwyer-Shick said.

"Every 12-year-old girl who gets her first sports bra, can relate to it.

Australia hasn't been included so far, but that's soon to change with a collaboration in 2022.

One of the organisations working with the Sports Bra Project is Women Sport Australia, which says it's proud to be involved.

"We look forward to seeing bras donated to Australian communities who need them."

The women 'dealing with so much'

Dwyer-Shick grew up playing a lot of sport, but soccer was her main game. She played in college, coached intercollegiate soccer for 15 years and remains involved in youth sports.

The idea for the Sports Bra Project came to her before travelling with a non-profit organisation through Namibia. They'd already sent over a shipping container of items like soccer balls, boots and schoolbooks.

"We were working with a wonderful woman with the Namibian Football Association and we're in the capital city of Windhoek.

"She's got some programs that are really far flung in some rural areas. I figured she would take them to those programs."

But instead, she asked if she could give them to her national team players.

On a different trip, this time to Brazil, Dwyer-Shick noted the sporadic appearances of women and girls in a soccer program she was running. She discovered some couldn't arrange transport or needed to mind siblings.

"Some of what the girls and the women said really hit home," she said.

"What they dealt with culturally, but also that manufactured goods [like sports bras] in Brazil are expensive.

After those experiences, Dwyer-Shick was on a mission. She spoke to friends and other female coaches, who lamented the lack of women in leadership roles, and how women's issues were overlooked.

So those women decided to informally help each other out.

Dwyer-Shick says finally having a sports bra can be life changing for some people.

"There's a group we gave to recently in Seattle, Washington, and they came back to the women who distributed the bras and said 'oh my gosh I just used the bra, we went out walking, we went out hiking, even if it was raining, we still went out'.

The bras now largely come from groups and individuals who do sports bra drives.

It adds another layer to the project by helping young women take on leadership roles without much pressure.

"For a young athlete or a young assistant coach to take on that leadership in a project, they're able to take ownership of it and the worst that happens if it fails is that they don't get bras," Dwyer-Shick said.

For example, a young group of high school students in Minnesota has just collected 100 sports bras.

When a person donates a bra, they also get the chance to write a personal message of support to the recipient.

Some of them say things like 'you rock', 'I believe in you' and 'you have the right to play'.

"It's not just a company giving it to them, it's that personal tie," Dwyer-Shick said.

Wearing a bra is normal

Dwyer-Shick also wants these drives to normalise the conversation around bras and their role as a basic piece of sporting equipment.

"So the young girls who might not be comfortable talking about it, once they're on a sports bra drive it's now suddenly not a strange thing when they hit puberty," she said.

And what about when they're received?

"Some groups are ecstatic," Dwyer-Shick said.

"Then there's other stories where the girls were kind of a little uncomfortable, they weren't sure, they didn't look excited.

"But then when the organisers walked by later they overheard the girls talking amongst themselves, they were like 'oh my god', they were super excited."

The Sports Bra Project has grown over the years thanks to the effort of international networks committed to supporting female athletes.

But COVID-19 has had a big impact on the project, because of its reliance on people to carry the bras while travelling.

"It pretty much stopped it for a while," Dwyer-Shick said.

"And when in-person events stopped, a lot of the drives stopped too."

However, the travel hiatus gave Dwyer-Shick time to forge connections and lay the groundwork to help communities here in Australia.

"It facilitated some in-person events that now have to go digital at an international level, which really created some fascinating networks."

Networks that are set to bring the benefits of sport and exercise, to a whole new group of Australian women.