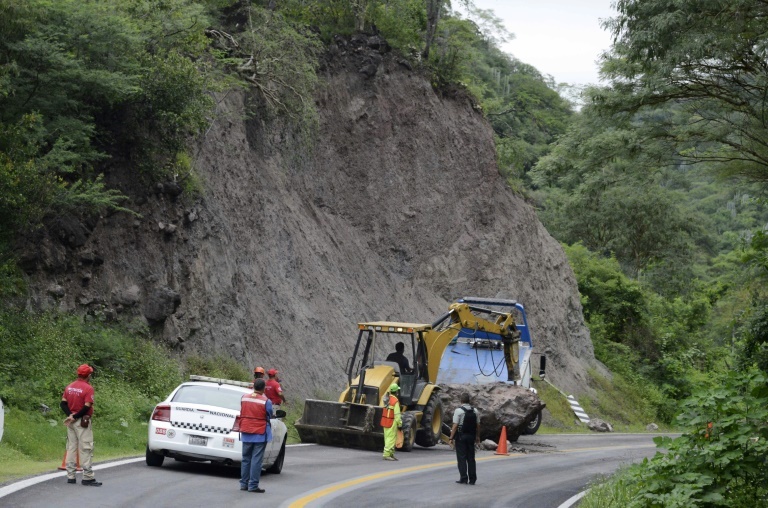 Mexico City (AFP) - A 7.1-magnitude earthquake that struck southern Mexico this week originated near a section of a fault that experts worry has been building up tension for more than a century.

The powerful tremor that occurred on Tuesday near the Pacific resort city of Acapulco left at least one person dead and damaged hospitals, homes, shops and hotels.

Mexico sits in the world's most seismically and volcanically active zone, known as the Ring of Fire, where the Pacific plate meets surrounding tectonic plates.

On the anniversary of that earthquake in 2017, a 7.1 quake left around 370 people dead, mainly in the capital.

Where did latest quake occur?

The region is vulnerable to seismic activity due because of the Cocos and North American tectonic plates grinding against each other.

"The undersea Cocos plate is constantly trying to push below North America, the continental plate where most of Mexico's territory sits," said Arturo Iglesias, head of the National Seismological Service.

Within this zone lies what is known as the Guerrero gap -- part of a fault stretching from Acapulco 230 kilometers northwest along the coast to the town of Papanoa.

A seismic gap is what the United States Geological Survey describes as a section of a fault that has produced earthquakes in the past but is now quiet.

Why is it causing concern?

Although earthquakes cannot be predicted, the Guerrero gap is a source of worry because it has not produced a significant earthquake since 1911.

"It's an area off the coast of Guerrero that has not had a major earthquake for a long time," said Ana Maria Soler, an expert at the National Autonomous University of Mexico.

"There is no certainty.These are all questions of statistics," she added.

Iglesias noted that it has been 110 years since the Guerrero gap produced a major earthquake.

"They typically occur every 30 to 50 years.It's already more than that," he said.

Although experts are reluctant to make predictions, they believe that a large earthquake, or several smaller ones, could occur in the zone.

"The northwestern edge of the gap already broke in an earthquake in 2014, so what remains can generate an earthquake of up to 7.8 magnitude, but it may be more smaller earthquakes," Iglesias said.

Tremors in the area may also happen less frequently than originally thought, he said.

Mexico City, which together with surrounding urban areas is home to more than 20 million people, is seen as vulnerable to a quake in the Guerrero gap.

The capital sits atop a former lake bed and has an early warning alarm system using seismic monitors that aims to give residents enough time to evacuate buildings.

"It's well known that this area (the Guerrero gap) has significant potential to generate earthquakes," Iglesias said.

"So much so that we have an early warning system for Mexico City," he added