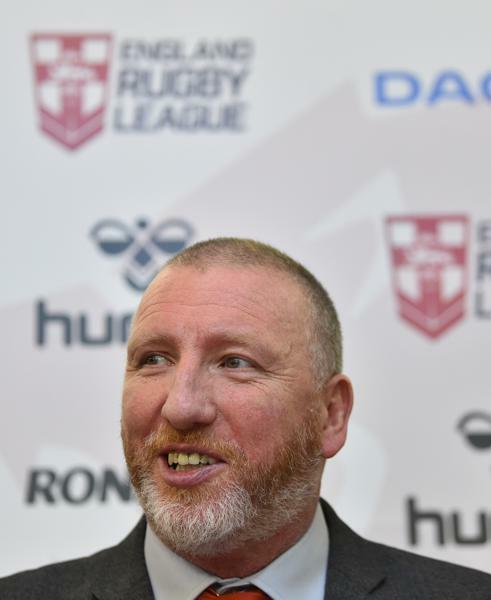 Seasoned Super League watchers had begun to notice. There had been something missing from the last few months of rugby league in England.

While the sport went through bad news cycles—the postponement of a World Cup—and good news cycles—French teams topping both regular-season tables—there had been a notable absentee.

Ralph Rimmer, the CEO of the Rugby Football League (RFL), and theoretically the man who runs the sport in its native land, had not been seen for months. It’s quite hard for such a big figure to disappear, but the 6’5 CEO had managed it.

Of course, having the major leader of the game go missing isn’t necessarily a bad thing—doubtless, more than a few fans of Australia’s National Rugby League (NRL) would wish their boss would give over for a bit—but with the game at a low ebb, plenty of fans began to wonder quite where the big fella had gotten to.

Finally, this weekend, Ralph Rimmer fronted the rugby league media. It was a curious interview, one that seems to have raised more questions than it answered. In short, it was heavy on rhetoric and light on detail.

Rimmer excused his absence as having been spent beavering away in the background.

“And sometimes the best way to get things done is to work alongside some of your peers that are going to help you get there and do the work quietly before you start to come out and talk about the journey going forward.”

Rimmer’s remit currently involves negotiating a deal with private equity partners, and anyone who has had the slightest knowledge with big financiers will know, discussing things openly before they are signed and sealed is total kryptonite. You can’t do it.

Secondly, it also involves helming discussions with broadcast partners, the financial lifeblood of the sport, and trying to get the best deal possible out of them. It’s probably best to keep the cards close to the chest there, too.

Thirdly, the RFL is in the process of reuniting its purview as the national governing body of rugby league, with its main competition, Super League, from which it consciously uncoupled in 2018. Again, it’s hard to see how those discussions would be improved if one of the major negotiators began giving forth to the press about the negotiations.

On both fronts, the CEO wouldn’t be able to say much more than “discussions are ongoing”, which might have been better than radio silence, but not much better.

In that sense, it’s hard to square the reality of the job with the needs of the role. The CEO is the public face of an organization, but also the key decision-maker. They have a duty to keep their stakeholders informed, but also to get the best deal for the organization, which evidently involves not airing the laundry in public.

The private equity question, in essence, could be the answer to both the short-term funding issue and the long-term structural issue. What holds rugby league in England back is a chronic lack of cash and an unwillingness of major stakeholders to see further than their own face.

In short, they’ve been running the same business model since the last time an external partner, namely Sky television, forced them to change to it in 1996 in order to win control of the sport in Australia. If that sounds convoluted, that’s because it is, which is why Rugby League Digest is into its 30th chapter of a podcast series explaining it all.

The RFL and Super League executive are meant to be those safeguarding the sport, but they don’t have the financial gravitas to overrule the 12 clubs, so inevitably, short-termism prevails. This is hardly unique to rugby league, of course.

An equity partner, with outside money and, crucially, outside knowledge, could provide a long-term view, different ideas and the cash to back them up. They could force clubs to listen to them, or find new clubs that will, exactly as Sky did in 1996.

Inevitably when the discussion turns to outside investment in English rugby league, the Hearns will be mentioned. The Hearns, for the uninitiated, are Barry (the father and President) and Eddie (the son and Chairman) of Matchroom Sport, the company that has revolutionized boxing, darts and snooker in the UK.

Rimmer himself was asked if he had met with them, and while he did admit to having a pint with Barry, he said that the subject of rugby league did not come up.

The Hearns are seemingly perma-linked to rugby league. The logic behind it appears to be that they have taken sports beloved of the English working class and made them big time. That is undeniable, and the Hearns are undoubtedly superb at what they do.

There is, however, is a significant deviation between the general perception of what they do is, and what they actually do. The genius of Matchroom Sport has been that it has turned sporting competitions into events, one-off occasions with a casual supporter crowd.

It looks like sport, and sport happens, but the marketing, staging and production are nothing like the vast majority of sporting events.

Professional boxing is, was and always will be more inclined towards what the Hearns do that because every fight night is an event, with a different venue and a different lineup.

If you need an example of why professional boxing isn’t like a normal sport, look no further than the recent Evander Holyfield-Vitor Belfort farce.

Furthermore, Josh Warrington, a Matchroom fighter, sold out Super League club Leeds Rhinos’ stadium two weeks ago for one of his fights, but he doesn’t have convince his fans to buy tickets again 15 times a year for the next 20 years, and Matchroom don’t have to replicate that ten more times within a 200-mile radius.

That’s where what the Hearns do, and what rugby league actually needs, so vitally differ. When Barry Hearn bought a football club, Leyton Orient, he admitted that it was the only part of his empire that didn’t make a penny.

Promoting the events that Matchroom promotes has far more in common with, say, a concert tour than a sports league. If rugby league wanted to engage someone with knowledge of how to promote concert tours, they could go speak to Simon Moran, one of the directors of the UK’s biggest music venue chain, Academy Music Group: he’s also the owner of Warrington Wolves.

Fans were right to hold Ralph Rimmer to account, and to ask that the CEO of the sport that they love front the media a little more frequently. Scrutiny is good and communication channels from the RFL to supporters have often been terrible.

But fans, too, should be cognisant of what their leaders can and can’t say. Rimmer has given the update on where he has been these last few months. Now, the time will soon come to deliver on the work that he promises has been going on in the background.