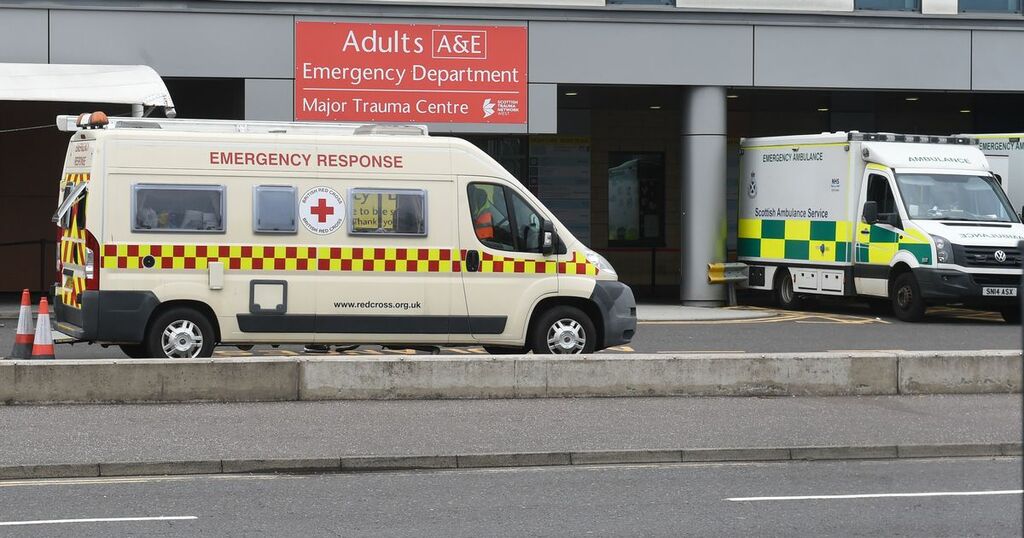 The Red Cross has been drafted in to Scotland’s biggest hospital to provide emergency aid as ambulances queue up in car parks for hours.

Volunteers were yesterday handing out tea, coffee and biscuits to paramedics, patients and relatives at Glasgow’s Queen Elizabeth University Hospital.

The Red Cross emergency response vehicle is parked up outside the A&E department as the queue of ambulances waiting to hand over patients continues to grow.

Last night, it was described as “shocking” that the humanitarian crisis charity was needed at the country’s flagship hospital.

At 1pm yesterday, 16 ambulances had queued for up to four hours waiting to deliver patients – and paramedics feared the situation would get worse as the night wore on.

By 5pm, there were still 16 ambulances waiting.

It is understood the Red Cross were brought in about a week ago after talks with the Scottish Ambulance Service as waiting times increased dramatically.

Yesterday, the Record told how the trade union Unite called for the SAS to declare “major incident” status to protect the public.

The union said the move would mean other public bodies would be called in to immediately assist.

Community health workers could then be required to attend to patients in the community, which may involve setting up clinical tents until paramedics are able to attend.

It could also involve pop-up wards or army involvement to provide support to free up paramedics at hospital.

Jamie McNamee, Unite convener at SAS, said if the major incident had been declared, the Red Cross would have been able to step in to support patients and free up ambulance staff instead of just trying to keep paramedics and patients comfortable during the long waits.

He said: “In the hours sitting there, they could have covered two or three other emergency calls. But while they are not doing anything people go on to the stack and patients remain on the stack until resources are
freed up.

“By 5 or 6pm it will really be stacking up and will begin to affect high acuity patients – not purple or red calls (the most at risk of dying) but people who are significantly unwell.

“On Wednesday, there were 24 high acuity calls sitting on the stack overnight – two dozen calls which remained unattended.”

And he said he had heard of cases where it had taken 40 hours for a bed to be found for patients – which meant they would have been on trollies in corridors for almost two days.

Stephen Flowers, 48, from Glasgow’s south side, spoke to an ambulance driver friend who was parked up for four hours before he could deliver a patient suffering from chest pains to A&E.

Stephen said: “It had been ruled out she wasn’t having a heart attack but her family called an ambulance because her condition was worsening.

“I went down to see what was going on and counted 14 ambulances waiting outside the hospital in the car park.

“My friend was supposed to pick up other people in Paisley and take them to hospital after he dropped off the woman but he was due off shift at 5pm so he wouldn’t get away in time to get them. So who knows when they will get picked up?

“There will be people not getting treated tonight because of this. How many people will die in the back of an ambulance waiting to get in the door?

“There is no dignity or duty of care. It is as if they are an old motor abandoned in a car park.”

Labour’s health spokeswoman Jackie Baillie said: “It is simply shocking that the Red Cross has had to be drafted in to help look after patients waiting in ambulances at one of Scotland’s flagship hospitals.

“The people of Scotland are now being put directly in danger due to the incompetence of the SNP government.

“Our NHS needs support and it needs it urgently.”

A spokeswoman from the Scottish Ambulance Service said there were nine crews at QEUH A&E at 1.20pm, with an average waiting time of 176 minutes – just under three hours.

She added: “We have British Red Cross support at QEUH to provide hot or cold refreshments to our staff and this is to support them during challenging weather conditions and long waiting times when they can’t get back to their station for refreshments and food.

“This has been in place at points throughout the pandemic.”

A spokesman from NHS Greater Glasgow and Clyde said: “Our ED teams have been working incredibly hard to see, diagnose and admit or discharge patients as quickly as possible.

“In recent weeks, however, as has been the case across Scotland, pressures on our services have been mounting due to increased Covid infection, rising ED attendances and additional staffing pressures.”