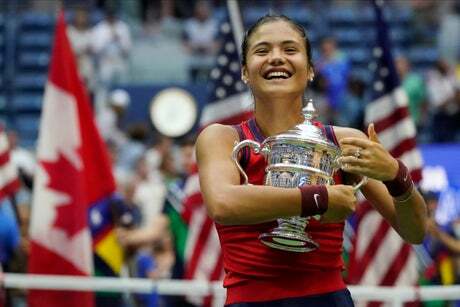 Raducanu, who is just 18, won the US Open on Saturday night after a brilliant 6-4 6-3 win over Leylah Fernandez in the final.

The teenager has now followed in the footsteps of Virginia Wade, who lifted the Wimbledon trophy in 1977, by winning a Grand Slam.

Raducanu, who had to qualify for the US Open in New York, was flawless in her march to glory and did not drop a set during the entire tournament.

The teenager has rightly been receiving plenty of praise in the wake of her win, with The Queen one of the first to congratulate her.

“I send my congratulations to you on your success in winning the United States Open Tennis Championships,” a message from The Queen to the teenager read.

“It is a remarkable achievement at such a young age, and is testament to your hard work and dedication.

“I have no doubt your outstanding performance, and that of your opponent, Leylah Fernandez, will inspire the next generation of tennis players. I send my warmest good wishes to you and your many supporters.”

The Duke and Duchess of Cambridge also hailed the achievements of the teenager, who moved to England with her Romanian father and Chinese mother at the age of two.

“Huge congratulations Emma Raducanu on your stunning performances and historic Grand Slam victory!” the Duke and Duchess of Cambridge wrote on Twitter.

Prime Minister Johnson paid tribute to Toronto-born Raducanu, he wrote on Twitter: “What a sensational match! Huge congratulations to Emma Raducanu. You showed extraordinary skill, poise and guts and we are all hugely proud of you.”