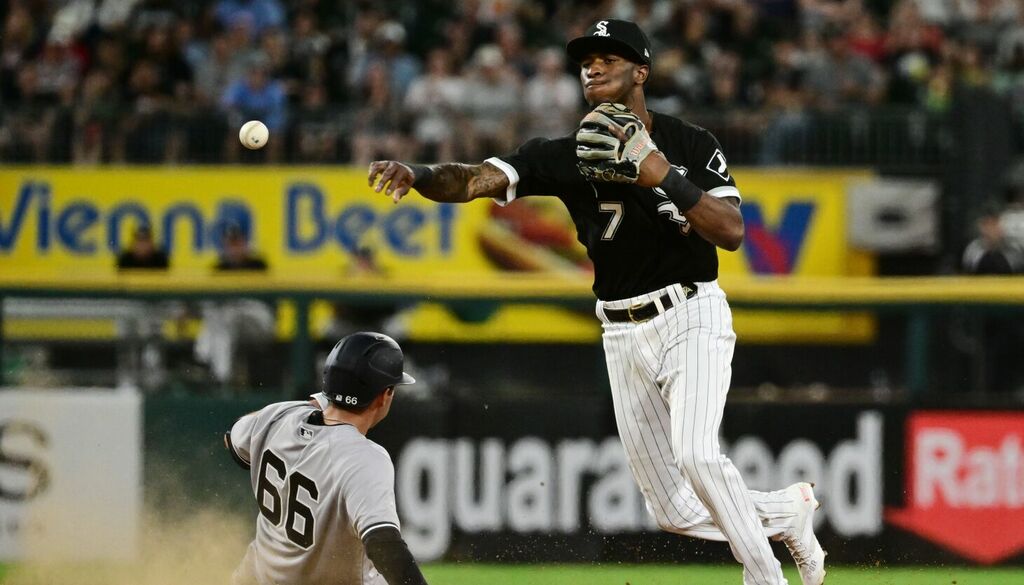 Polling Place: Which is likelier, the White Sox winning 90 games or the Cubs losing 90?
Both teams are under .500 entering Saturday’s games.

The Guardian - US
Deuces are wild in the latest baseball quiz

Axios
Tom Brady will call NFL games on Fox when his playing career ends
TAMPA, Fla. — it’s good to know Tom Brady will have a job in football when he’s really ready to…

The Producer: Marc Brady is the biggest name in Chicago sports TV you don’t know

If you’re a longtime TV viewer of Chicago sports, you’ve undoubtedly — and likely unknowingly — seen and heard the work of Marc Brady.

He’s in his 30th year on the production side of game broadcasts. He has produced Blackhawks, Bulls, Cubs and White Sox games. He has helped bring to viewers some of the biggest moments in Chicago sports history. He currently produces Bulls games for NBC Sports Chicago.

Yet, you never hear his voice. You only hear his name in the closing credits.

But that’s not entirely true. Though Brady isn’t actually speaking to you, he’s communicating with you through the announcers. Call him a ghost-speaker, if you will.

The producer is the boss of the “show.” That’s what producers call the broadcasts. To them, it’s more than a game.

Brady said the game always lends itself to the type of show he does. If it goes down to the wire, it’s a drama. If it turns into a blowout, it’s something else.

“That’s when it’s time to still inform and entertain because it’s a show,” he said. “There’s always somebody out there that cares. There’s people who have been waiting all day for that game. My job is to take you away from the world you were in. Your world is now here. It’s my opportunity to present that to you.”

There’s a distinct difference between the producer and the director, who chooses the images and camera angles you see.

“The director is a now person; the producer is a planning person,” Brady said. “The director must be constantly moving with the action, while I am looking for my spot to get in. I’ll set the tone; he has to make it happen. And if it’s working right, it’s a hand-in-hand thing that’s a perfect dance.”

Brady grew up in Hazel Crest watching the Cubs on WGN. Harry Caray often made Harris the third member of the booth with analyst Steve Stone. Brady didn’t understand Harris’ job at the time, but his fascination with television production led him to learn. At Columbia College, he enjoyed creating shows more than being the focus of them, and his first job out of college was as a stage manager at SportsChannel in 1992.

He worked on White Sox games with “Hawk” Harrelson and Tom Paciorek and Bulls games with Tom Dore and “Red” Kerr. His job was to be the eyes on the field or floor for the production truck, telling the crew what to watch for. He passed papers to the announcers, cued them to talk and helped with whatever they needed.

After producing Bulls pregame shows with Norm Van Lier and Steve Kashul, Brady left in 1998 for WGN, where he worked with Harris and became an associate producer for Bulls and Cubs games. That job entailed working on statistics and graphics, which was a dream come true after years of staring at the sports pages as a kid, studying numbers whether they made sense to him or not.

He was working May 6, 1998, when Cubs pitcher Kerry Wood tied the major-league record for strikeouts in a game with 20. Harris told Brady to go to the field and grab Wood for an interview. The enormity of what had happened hit Brady when he tried to put an IFB in Wood’s ear.

“Both of our hands were shaking so violently from being nervous,” Brady said. “That became my regular role, to run onto the field and get players after big games. I got Sammy Sosa in Detroit when he hit [home run] No. 20 in a month.”

Along the way, Brady learned from Harris, whose habit of showing fans’ unique headwear left an impression.

“People came to the game to wear hats for Arne to show them,” Brady said. “You’re paying for a ticket to get in, and you’re worried about whether Arne’s gonna show you. He influenced more lives than you can ever think.”

Harris died in 2001 at 67. Brady became WGN’s Cubs producer in 2008, though he also would produce Blackhawks, Bulls and Sox broadcasts. As soon as WGN lost all of the teams in 2019, NBC Sports Chicago came calling for Brady, who wasn’t even looking for a job. The network tabbed him for its Bulls games.

It was a shrewd move considering Brady’s history with the team and the quality of his work, which is colored by his passion for the job. He writes most of the opens to hype the games, and he’s the creative force behind graphic elements and the interstitials that lead into a package on a player.

Most important, Brady builds relationships with his colleagues that extend off the air. The crew has a group chat with continuous conversation that can lead anywhere. Basketball is bound to come up, and Amin said that makes game preparation easier.

“The best crews that I work on, including my football crew, that’s how it is,” said Amin, who also works for Fox. “The crews that continuously communicate are the ones that are in lock step.”

That’s particularly important for the producer and play-by-play voice. Brady and Amin talk constantly during games.

“That’s a relationship you have to make sure you’re good with,” Brady said. “There’s nothing I can really tell Stacey King that he doesn’t know about basketball.”

Said Amin: “You have to have a producer that you trust, that knows the material, and you need to have somebody who keeps us at the table even keeled. Brady encapsulates all those things.

“The broadcast truck has to be a well-oiled machine. The engine of that has to be producer.”

Brady’s truck for Bulls games includes director Russ Leonard and associate producer Tamra Anderson, both vital to the operation. Brady will switch trucks next month when he briefly fills in for Sox producer Chris Withers.

Even in his 30th year, Brady still appreciates being at games and bringing them to viewers.

“I’ve been a very lucky person, and I don’t take any of it for granted,” he said. “It’s been a joy for me to be allowed to come into people’s homes, even though most of them don’t even know it.”

Polling Place: Which is likelier, the White Sox winning 90 games or the Cubs losing 90?
Both teams are under .500 entering Saturday’s games.

The Guardian - US
Deuces are wild in the latest baseball quiz

Axios
Tom Brady will call NFL games on Fox when his playing career ends
TAMPA, Fla. — it’s good to know Tom Brady will have a job in football when he’s really ready to…