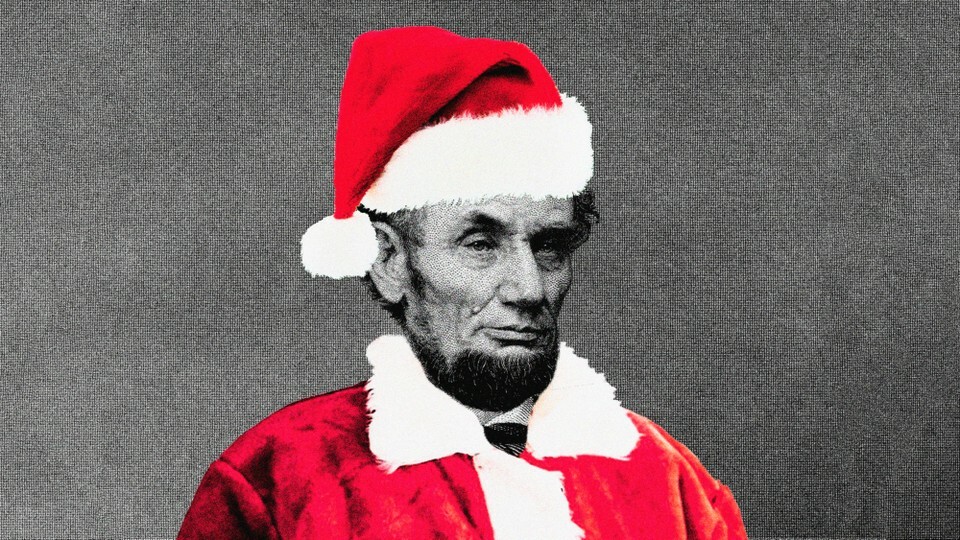 Before the presidency of Abraham Lincoln, Christmas and Thanksgiving reflected an intense regional divide. Thanksgiving was historically associated with America’s so-called Puritan North and Christmas with the Cavalier South. Lincoln, who was rooted in early Puritan New England on his father’s side and the Cavalier Virginia planting class on his mother’s, combined a deep moral commitment to liberty with a firm sense of honor. He responded to the crisis of the Civil War by redefining Thanksgiving and Christmas as days celebrated not on the basis of sectional identities, but rather in the inclusive spirit of American democracy, which he called “the last best hope of earth.”

The farming and harvest festival eventually known as Thanksgiving had its roots in a celebration held by the Puritan Pilgrims of Plymouth Colony in the fall of 1621, nearly a year after the landing of the Mayflower. Thanksgiving was for more than two centuries a northern-state affair, celebrated annually at different times in the mid-to-late fall. In the early 1840s, Sarah Josepha Hale, the editor of the popular magazine Godey’s Lady’s Book, began using her columns to push for nationalizing Thanksgiving and celebrating it on the last Thursday in November. Her writing became more and more impassioned as she witnessed the widening rift over slavery. When division led to civil war, Hale wrote a letter to President Lincoln, emphasizing the urgency of making Thanksgiving “a National and fixed Union Festival” that would offer healing to a torn nation. She told him that by announcing “this union Thanksgiving,” the president could ensure that “the permanency and unity of our Great American Festival of Thanksgiving would be forever secured.”

Like Hale, Lincoln thought that holidays had the capacity to unite people—in his words, “they bring us together, and thereby make us better acquainted, and better friends than we otherwise would be … They make more pleasant, and more strong, and more durable, the bond of social and political union among us.”

During the Civil War, proclaiming religious holidays was one of Lincoln’s main cultural means of encouraging the spirit of “unionism” that the poet Walt Whitman identified as the “hard-pan of his character.” To this end, Lincoln issued nine religious proclamations—far more than any other U.S. president.

He saw Thanksgiving in particular as a powerful impetus to restoring national unity on the basis of human justice. On October 3, 1863, shortly after receiving Hale’s letter, Lincoln declared the last Thursday of November as the day when God would be thanked “as with one heart and one voice by the whole American People,” including “my fellow citizens in every part of the United States, and also those who are at sea and those who are sojourning in foreign lands.” Lincoln asked for “the Almighty Hand to heal the wounds of the nation and to restore it as soon as may be consistent with the Divine purposes to the full enjoyment of peace, harmony, tranquility and Union.”

The next year, continuing his effort to forge national unity on northern terms, Lincoln again set the last Thursday in November as the date for Thanksgiving, prompting The New York Times to remark, “The custom of the New England Pilgrims, at first confined to a few states, has at last, in 1864, assumed the scope and standing of a grand national holiday, which it is hoped, will be permanent and universally observed.” The federally authorized Thanksgiving held on the last Thursday in November became a tradition, and Franklin D. Roosevelt established it as an official American holiday in 1941.

[Read: Thanksgiving, a celebration of inequality]

Through his Thanksgiving proclamations, Lincoln was nationalizing a holiday that by its nature was associated with Puritan New England, the main source of abolitionism. The New-York Tribune noted that “the general adoption of Thanksgiving Day is a striking proof of New England influence.” Similarly, in an article about “A National Thanksgiving,” a Massachusetts paper announced, “Thus the old Puritan festival, so long restricted to the narrow circuit of New England, and derided by the self-styled cavaliers of the South as a relic of early conceit and bigotry, takes on, in this eventful and memorable year and for the first time in our history, a national character.” Lincoln’s Thanksgiving proclamations accomplished for Puritan-based notions of liberty what the Gettysburg Address did for the doctrine of human equality in the Declaration of Independence, merging progressive American ideals with the very definition of the nation.

Christmas had never taken root in the North. In fact, it had frequently been banned by the Puritans of early New England, who regarded it as a vestige of paganism that had been adopted by the Catholic and Anglican Churches. The Puritans, who fled to the New World in rebellion against these Churches, rejected saints’ days and religious holidays such as Christmas and Easter, pointing out that they were unmentioned in the Bible. Orthodox Puritans argued that the date of Christ’s birth was unknown, and that fourth-century Christians had sacrilegiously taken December 25 from a pagan festival, Saturnalia, that marked the winter solstice. Rejecting this “heathenish” holiday, Puritan leaders in New England did what they could to suppress Christmas celebrations. The Pilgrims’ spiritual leader, the Reverend John Robinson, said that worshippers could not be true Christians as long as they continued “benightedly celebrating Easter and Christmas, for which there was no warrant in Scripture.” Increase Mather wrote in his diary that “men dishonor Christ more in the 12 days of Christmas than in all the 12 months beside.” As the 19th-century historian George Curtis wrote, “The Puritans … frowned on Santa Claus as Antichrist” and viewed Christmas as a relic of “popery.”

The Cavaliers, southern settlers loyal to the Stuart kings, found in Christmas both a religious holiday and a means of legitimizing and preserving the institution of slavery. Slaveholding southerners believed that they were carrying on the old Anglican tradition of a festive Christmas by giving the people they had enslaved alcohol and encouraging wild celebrations. But Frederick Douglass hated the drunken revelry of Christmas, seeing it as a sop contrived by masters to distract from oppression.

During Lincoln’s presidency, though, Christmas took on new meaning. Chiefly responsible for its transformation was the famous German American illustrator Thomas Nast, who created the modern Santa Claus—the jovially pipe-smoking, white-bearded, red-suited night flyer we know so well—and made him distinctly pro-northern and antislavery. Nast, a Lincoln devotee, put his Santa in politically charged scenarios. One of his first distinctive illustrations, on the cover of Harper’s Magazine in January 1863—the month Lincoln issued the Emancipation Proclamation—showed Santa delivering presents to Union soldiers in an army camp. Nast’s Santa, quite literally, embodies the North: He is clad in stars and stripes, surrounded by cheering Union soldiers, and holds in his hand a toy puppet of Jefferson Davis being hanged by the neck—a reminder of the improvised line in “The John Brown Song,” “We’ll hang Jeff Davis from a sour apple tree.”

Lincoln recognized the political significance of such illustrations. “Thomas Nast has been our best recruiting sergeant,” he said. “His emblematic cartoons have never failed to arouse enthusiasm and patriotism, and have always seemed to come just when these articles were getting scarce.” General Ulysses S. Grant, when asked who was “the foremost figure in civil life” during the war years, replied, “I think, Thomas Nast.”

During the second half of the Civil War, the North became more associated with Christmas. An 1863 political cartoon, “Santa Claus Visits Uncle Sam!,” showed Lincoln in a Santa outfit stuffing Union victories—Gettysburg, Vicksburg, Port Hudson, and others—into the nation’s Christmas stocking. The next year, the North’s imminent victory over the South was represented in a picture of the costumed “Santa Claus Lincoln” thumbing his nose at a recumbent, dying Davis.

December 1864 brought a merging of the Christmas spirit and the North’s aims. William Tecumseh Sherman intentionally timed his note to Lincoln about his capture of Savannah, Georgia, to arrive by telegraph by Christmas. Indeed, Lincoln received Sherman’s telegram— “I beg to present you as a Christmas gift the city of Savannah”—on December 25. Lincoln immediately replied, “Many, many, thanks for your Christmas-gift—the capture of Savannah.” Newspapers ran exuberant headlines such as “SAVANNAH OURS. Christmas Gift to the Nation.” The popular magazine Frank Leslie’s Weekly predicted that hereafter “the 25th of December [will] recall the splendid ‘Christmas gift’ of Gen. Sherman to ‘Old Abe’ for many generations to come.” The Thirteenth Amendment was about to work its difficult way through Congress, and Sherman’s landmark Christmas present gave a timely boost to the abolition of slavery.

The American celebration of Christmas, once endemic to the slaveholding South, was now associated with Lincoln and the North. No one saw this more clearly than Nast, whose December 1864 lithograph “The Union Christmas Dinner” showed the tall, dignified Lincoln standing at the open door of a grand dining hall (the northern-controlled nation) and inviting defeated southerners to a holiday feast at a long table. In the picture, northerners occupy the chairs on one side of the table; the opposite side of the table is empty, soon to be filled with southerners who will take chairs labeled with abbreviations of the names of their respective states. Nast made the North’s domination of the holiday very clear. Not only are Lincoln and the seated northerners the hosts of the “Union Christmas,” but the lower-left corner of the engraving has a picture of Confederate generals surrendering to Union ones, while the upper-right corner features an image of the prodigal son returning to his father.

By the end of the Civil War, Thanksgiving and Christmas reached across sectional and ethnic divisions. They were joined by a third holiday, Easter—also minimized in Puritan New England—which took on deeper meaning when Lincoln was assassinated on Good Friday, 1865. In 1868, three years after the war, Godey’s Lady’s Book, which had once made a lonely call for national holidays, could joyously count among America’s holidays “Thanksgiving Day, with its families all over the land gathered together for kindly intercourse; Christmas, with its delightful associations and holy memories; and Easter, best and brightest of all, when peace and good-will are renewed to men.”

The North’s decisive victory in the Civil War helped turn these religious holidays into what Lincoln had said civic celebrations should be: opportunities to strengthen “the bond of social and political union among us.”