The power of nutrition: how to tailor your cat’s diet according to its age

More than 3.2m households in the UK got a pet during the pandemic. For three-quarters of these new pet owners, a new animal has been a boost to their mental health in difficult times. But there is more to having a pet than having a furry companion to cuddle on the sofa, as the 5% of new owners who had returned their pet by March 2021 found out. Just like millions of Brits, I have also been toying with the idea of getting a pet – a cat, to be specific. It turns out, there are many things I hadn’t considered, not least of all how important it is to feed your cat food that is specifically tailored to their stage of life.

Clare Hemmings, a qualified former veterinary nurse and scientific communications manager at Royal Canin – who has owned 19 cats over the years, and is fascinated by the power of nutrition – says: “If you change their diet, you could make a difference to the overall health and wellbeing of the animal.” Royal Canin has developed a nutrition range tailored to meet the needs of healthy cats of all sizes, breeds, lifestyles and tastes. These are further grouped by stage of life, an important factor that owners must take into consideration when choosing their cat’s food, says Hemmings.

Kittens (six weeks to 12 months)
Kittens need to eat very different food to fully grown cats and it’s vital for them to eat right in order to grow into healthy adults. “Kittens must have a specific omega-3 fatty acid called DHA, which is really important for brain function,” says Hemmings. “Their immune system is immature, the digestion is immature, and they’ve got a lot of growing to do – they can go from a few grams to three or four kilos [in their first year of their life]. So they need very specific levels of protein, calcium and phosphorus and, importantly, these must be in the correct ratio.”

While eating right is important for kittens, it’s vital not to overfeed them. “Their bodies aren’t equipped to decide how much they need,” says Hemmings. “So if you ever feed them lots of raw meat, for example, or extra bone meal for strong bones, or extra cheese, or milk, or whatever, you can end up giving them too much calcium, and that can unbalance their calcium and phosphorus ratio, which may lead to deformities.”

The first weeks and months are also about forming healthy food habits that will last into adulthood. “One of the problems in kittenhood is that we feed them in a way that we want to eat, which can override their hunger signals. So, you know, we’ll feed them two or three times a day and we give them a big pile of food or a whole pouch at a time. They don’t want to eat that much.

“Our studies have shown that cats would rather eat 14 to 20 tiny meals a day. The ideal is to feed a little portion of wet food in the morning, then leave dry food down for the day for them to nibble on. If you want to give them another portion of wet food later on, great. If you just want to feed them dry, great.

“They need to know food is always available to them. If they haven’t had that experience when they’re young, they get to adulthood and overeat because they don’t know when they will get their next meal.”

Adults (one to seven years old)
While kittens need nutrition for rapid growth, when a cat reaches adulthood the priority switches to a maintenance diet tailored to its breed. Take sphynxes, for example. “They have a much higher energy requirement than other cats,” says Hemmings. “So they have to have more calories, but they have to be fed in an energy-dense format because sphynxes have short guts. They also have a genetic predisposition to a specific heart condition, so we include elevated or higher levels of taurine to help support heart health.”

While there is a huge range of variables to consider when it comes to cat food, surprisingly, taste isn’t one of them. “Cats aren’t interested in flavours; they only have 500 tastebuds compared with a human’s 9,000. But they’ve got a really good sense of smell.”

This fact is lost on many cat owners, who project human ideas about what makes food great on to their pets, sometimes with devastating results. “Ingredients are just a vehicle for bringing nutrients,” says Hemmings. “Like a delivery van brings a package, I don’t care who brings the package as long as they arrive on time and with the right things. But people follow trends on the internet, which can cause health issues.” Feline veganism is one such problem that Hemmings warns cat owners against. “People make their pets follow human trends of cutting down on meat, but you just can’t have a vegetarian or vegan cat. Often people say: ‘Oh, my cat’s really healthy’ on some vegetarian diet, and the cat is actually going out and finding meat elsewhere. But if they’re unable to do this, at some point it can lead to very serious health challenges.”

Maturity and beyond (seven years and older)
“When cats age, their bodily functions begin to slow down,” says Hemmings. “They start to lose their sense of taste and smell.” To keep older cats interested in their food, Royal Canin’s formulations focus on texture, while also packing in antioxidants that provide support through the ageing process. This is particularly important for cats older than 12. “They need specific nutrients to address the effects of ageing, like dental care and old joints,” says Hemmings.

As important as it is to continue closely watching your cat’s nutrition as it ages, the foundations of a mature cat’s health are laid in the preceding years, and maintaining a healthy weight throughout a cat’s life is one surefire way to improve its older years. “We know from our studies that if you have obese cats, it can reduce the life expectancy by 1.9 years,” says Hemmings. “And that’s really significant when they only live to maybe 14.”

You don’t need to be a mind reader or body language expert to know what your cat needs to eat – at every stage of life, they require food tailored to them. Royal Canin cat food provides nutritionally complete, age- and breed-specific diets for optimum feline health 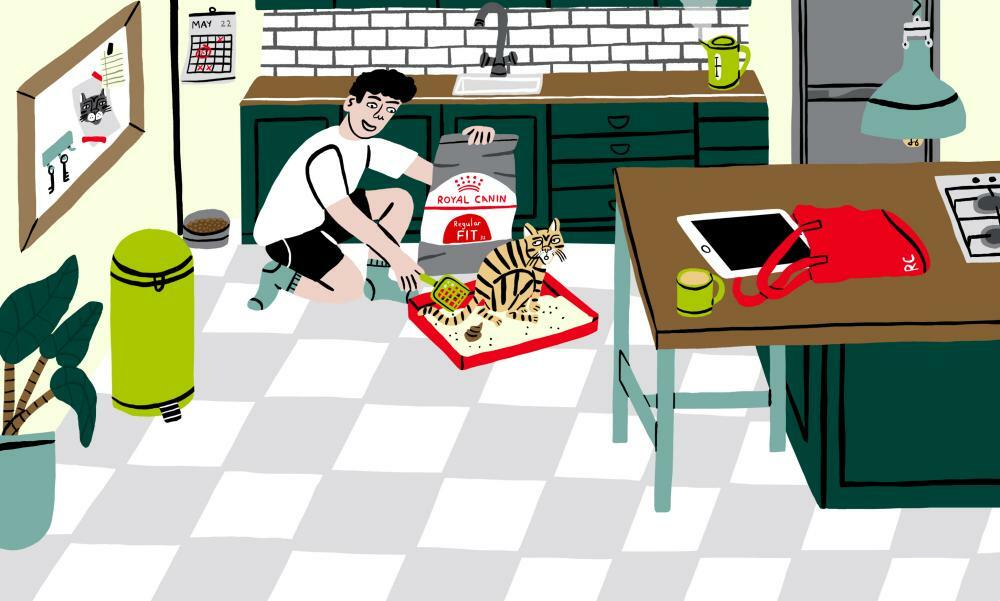 Littered with information: what does your cat’s poo say about its health?
Getting up close and personal with your kitten’s faeces may not sound appealing, but you can find out a lot…

A nutritious diet is often the greatest gift you can give a rescue cat, helping them grow healthier and happier

The Guardian - UK
‘People say they want me arrested’: the owners putting their pets on vegan diets

The vegan pet food industry is now worth billions. But can plant-based meals really meet a dog or cat’s nutritional…

If you’ve had enough of receiving sacrificial gifts, or don’t want your playful kitten turning into a cold catdult who…

The Guardian - UK
One subscription that gives you access to news from hundreds of sites
Decoding your cat: the real meaning behind the purring, padding and peeing

Being a cat owner is a wonderfully confusing thing – you think you finally understand them, only for your puss…