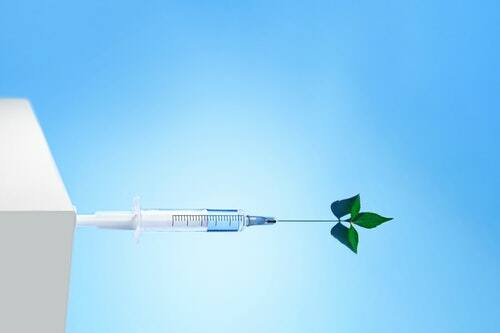 While unused COVID vaccine doses have languished in rich nations like the U.S., most countries are struggling to secure vaccine supplies, period. But now, scientists are developing vaccines that might be way easier to access, especially in less wealthy countries where storage at ultra-cold temperatures just isn’t feasible. According to EurekAlert, they’re essentially turning plants and bacteria into vaccine factories.

The two vaccine candidates researchers created coaxed the immune system to churn out high levels of neutralizing antibodies against SARS-CoV-2 in mice, as detailed in a paper published in the Journal of the American Chemical Society today. While the findings are promising, it’s important to stress that they were observed in mice, whose biology is similar to ours — but not the same. Clinical trials are still a long way off, EurekAlert reported, but if they do show the vaccines to be safe and effective in humans, they could boost efforts to distribute COVID-19 vaccines more equitably.

The researchers created one vaccine candidate from a plant virus known as a cowpea mosaic virus, and the other from the bacterial virus Q beta, the press release service explained. They engineered cowpea plants to grow millions of copies of the plant virus and performed a similar process with E. coli bacteria to cultivate the bacterial virus. After they harvested these viruses — both grown in the form of spherical nanoparticles — they stuck a tiny fragment of the SARS-CoV-2 spike protein to their surfaces, designed to trigger the body to mount an immune response against the actual virus.

These methods can make mass production of vaccines relatively easy and cheap, EurekAlert pointed out. Plus, since the nanoparticles remain stable at high temperatures, they don’t need to be kept cold like other COVID-19 vaccines, and can hold up to manufacturing processes that require heat, such as packaging them into patches or implants.

“Imagine if vaccine patches could be sent to the mailboxes of our most vulnerable people,” said Jon Pokorski, a professor of nanoengineering at the University of California San Diego and one of the study authors, according to EurekAlert. He added that a vaccine implant could protect those who’d have a hard time scheduling a second shot, which may help curb transmission earlier on.

Regardless of whether Poroski and his team delivered their vaccine candidates to mice through patches, implants, or a series of two shots, EurekAlert said, they saw high levels of neutralizing antibodies against SARS-CoV-2 in the animals’ blood as a result. And since they used a fragment of the spike protein outside of the region where many of the mutations have occurred, their candidates may safeguard against not only the original SARS-CoV-2, but variants of concern, too (although this is something they’re still testing).

“Even if this technology does not make an impact for COVID-19, it can be quickly adapted for the next threat,” said Nicole Steinmetz, director of the Center for Nano-ImmunoEngineering at the UC San Diego Jacobs School of Engineering, per EurekAlert. Scientists could use this method to create vaccines for other diseases. All they’d need to change is the target antigen on the surface of the nanoparticles, which Steinmetz and Pokorski’s labs have already done to make vaccine candidates for HPV and cholesterol.

While the findings are still preliminary, they at least start to narrow a glaring disparity in COVID-19 vaccine access. As of August 30, about 1 in 2 people in high-income countries have gotten at least one dose, according to the WHO — versus only 1 in 47 people in low-income countries. Our ability to obtain life-saving vaccines shouldn’t depend on where we live. To end the pandemic once and for all, we need to protect everyone.