The people living directly above the M4 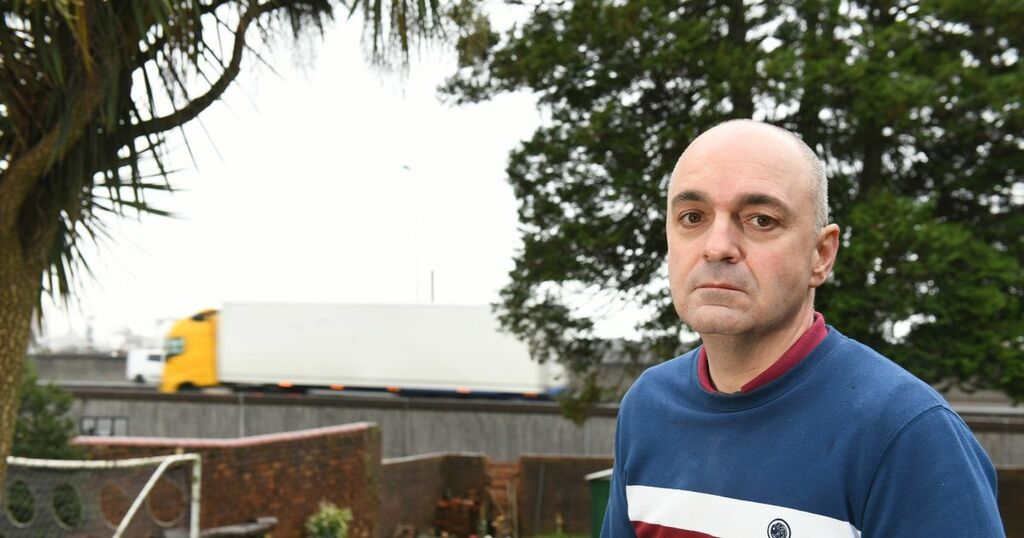 Stand inside Barbara and David Wilson's lovely home in Port Talbot and you can hear nothing but adorable pooch Bella scampering along the hallway.

But in their garden, it's a completely different story.

That's because their home in Pen-Y-Cae Road overlooks the M4, with just a narrow alley between their and other residents' gardens and four lanes of busy traffic, churning out noise and exhaust fumes all day and all night. For more Port Talbot stories, click here.

Read more: Council tax set to be frozen in Neath Port Talbot county to help people deal with other cost of living rises

The couple, aged 74 and 78 respectively, moved into their property in Pen-Y-Cae Road back in 1977.

At the time, even though what would become known as the M4, the old A48M, had been built then, raised up on 45 foot concrete pillars, the pair still enjoyed many evenings sat in their garden with a drink or a cup of coffee, relaxing and watching the world go by. They say they can't do that now.

"When we first moved here, in September, 1977, it was fabulous," said David. "We would sit outside, it was lovely."

Barbara added: "But there's no pleasure to sit outside anymore. We can't sit outside in our garden, for the noise."

Since moving there the couple have welcomed three daughters - who have gone on to bless them with 10 lovely grandchildren - and while their home will always hold a special place in their heart for the fond memories they've had there, they said the property had been spoilt for some years by the loud "drum" of vehicles passing by - and the dust and grime that settles on windows and garden furniture.

They said there were now far more cars and lorries on the road and the motorway was far busier than it used to be.

Barbara said she largely enjoyed the lockdowns of 2020 and 2021, as it meant she didn't hear nearly as much noise on the motorway when she was outside her home. Now life is somewhat back to normal - vehicles travelling along the motorway brought a constant droning noise, like a "drum," she said.

And it was even more frustrating at rush hour, particularly on a Friday, when the 50mph speed limit saw queues of traffic "moving at a walking pace," said David.

The constant whir of engines and traffic got so irritating that three years ago the couple forked out for triple-glazing in the windows at the front of their property.

They said this had made a world of difference to their home - and meant they could no longer hear the motorway when sat in their living room or front bedroom - but they obviously can't stop the noise from being heard outside.

"It's a lot busier now than when we moved here, the noise is like a drum," Barbara said. "We've got triple-glazed windows which means you can't hear it [in the front of the house], but the minute you go outside you hear it."

"What we think we should have is a [noise] barrier or shuttering," David said. "Like at other motorways, where the barrier blocks the sound from affecting the streets."

Typically, noise barriers are erected next to motorways and major A roads to help reduce sound nuisance levels for people living nearby. They're often made off-site and then assembled at the motorway, to minimise disruption, and can be three metres tall or significantly taller.

Barbara and David are certainly not alone in their complaints. We spoke to many Pen-Y-Cae Road residents of different ages about what it's like to live next to the M4 - and the same comments were raised time and time again: The M4 is noisy, polluted and sometimes hard to ignore. There are also people living directly beneath the M4 - and you can read more about them here.

Fellow Pen-Y-Cae Road resident Andrew Viazzani would also like to see barriers placed on the motorway to "blunt" the noise and pollution.

Find out about traffic and travel issues where you live:

Andrew has lived on the street for 15 years, after moving from Baglan Road, also in Port Talbot.

One of the reasons he was drawn to the street was because buyers could often swing more house for their money there - due to the location next to the M4.

He said locals were friendly and some of the huge houses boasted five bedrooms, three reception rooms and massive gardens and driveways

He said: "When we bought it, we knew the motorway was here, of course! It's a lovely home and cheaper to buy here [because you're so close to the motorway], our eyes were open to the noise - but that doesn't mean [Welsh Government or the highways agency] can't do anything about it."

"The road is loud, it should have a barrier, like a perspex barrier in other places that blunts the noise," he added. "And the pollution's not great, it's dirty."

For one of Andrew's near neighbours, who only wanted to be known as Karen, the pros of living in Pen-Y-Cae Road outweigh the cons.

Whilst the noise was "louder than normal" and louder than other places in Port Talbot or across Neath Port Talbot county, she said you get more for your money than elsewhere in town - and her home had a "lovely, big garden" making it perfect for her two dogs.

Karen's home is set slightly further back from the M4 than some other homes on the street, so pollution isn't as much of a concern for her either.

Similarly, resident Neil Clifford has lived on the street for 26 years. Whilst the loud traffic was frustrating at first, he said he had "got used to the noise by now". And he wasn't too concerned by pollution either.

At his property, his windows didn't typically get dirty from the fumes of vehicles flying down the motorway, he said - athough this could be because his property was set a bit further back than others on the street, and a few trees in his garden acted as a welcome separation between his garden and the M4.

When was the Port Talbot part of the M4 built?

The Port Talbot bypass was built in the 1960s and was originally the A48 motorway, but now forms part of the M4.

Construction on the M4 itself, which links south Wales to west London, began in 1961 - but the Welsh section of the motorway wasn't fully completed until 30 years later.

Nevertheless, the stretch of motorway through Port Talbot has operated as a motorway since the late 1960s/early 1970s, although traffic has increased over time.

What does Welsh Govern ment say about noise and pollution from the M4?

We have taken residents' concerns regarding noise and pollution from the M4 to the Welsh Government.

In response, a Welsh Government spokesperson said: "The section of the M4 motorway alongside Pen-Y-Cae Road, Port Talbot, has been identified as a possible priority site for noise mitigation measures.

"The full list of priority sites is currently being revised, with an updated list due to be published in 2023. It is anticipated that a new programme of prioritised noise mitigation works, in noise hotspots on the motorway and trunk road network, could commence during 2024 subject to funding."