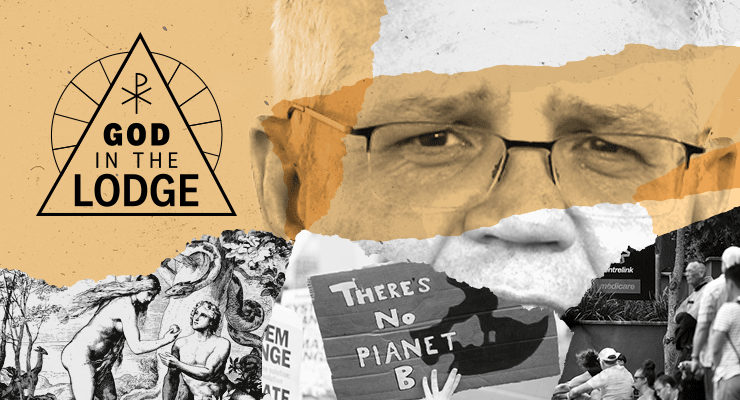 This is part nine of the series God in the Lodge. Read part one here, and find the full series here.

Scott Morrison’s Pentecostal Christian faith is at the centre of his understanding of political life. In his maiden speech to Parliament in 2008, he described himself as standing for “the immutable truths and principles of the Christian faith”.

But there is a paradox at the heart of Morrison and the relationship between his religious beliefs and his political theory and practice.

On the one hand, there is genuine concern that in a secular state the prime minister’s Christian faith will influence government policy untowardly. There is little evidence of this so far. But “religious freedom” legislation seems as likely to give Christians the freedom to persecute others as to protect them from persecution.

On the other hand, ironically, Morrison is not even close to being Christian enough. He shows no care, concern or compassion for the poor, the marginalised, the sick, the stranger at the gate, and so on.

Nevertheless, his political theory and practice do map closely on to the narrow band of Pentecostal evangelical Protestantism. When Morrison began his election victory speech on May 18, 2019, with the words “I have always believed in miracles”, it was no mere hyperbole. Morrison was declaring that God had actively intervened in the political process to bring about his election.

As a Pentecostalist, Morrison believes in divine providence. Put simply, this is the belief that God has “got the whole world in his hands”. For Morrison, all history is in the control of God — from the creation of the world to its end. Therefore climate change and the destruction of the world as a consequence does not seem to have any intellectual purchase with him.

In keeping with Pentecostal theology, Morrison appears to see himself as chosen by God to lead us all to his version of the promised land. This means that “if you have a go, you get a go”.

So wealth is a sign of having been chosen by God. The godly become wealthy and the wealthy are godly. The ungodly, on the other hand, stay poor.

All this aligns perfectly with the neoliberal economic views espoused by Morrison. The consequence is that it becomes a God-given task for those chosen by God to do his work to liberate people from reliance on the welfare state. On this account, rich men do find it easier to pass through the eyes of needles and enter the kingdom of heaven than the poor and the oppressed. God helps those who pull themselves up by their own bootstraps.

Don’t expect a sophisticated theology from Morrison. In Pentecostalism, faith trumps reason every time. It is light on doctrine and heavy on a direct personal relationship to God. Faith is focused upwards to God and not outwards to the world. Thus social equity and social justice are on the back-burner. So you don’t expect (and you don’t get) from a Pentecostalist like Morrison any progressive views on abortion, women’s rights, LGBTQI issues, immigration, the environment, same-sex marriage and so on.

And Pentecostalism generally holds to a social conservatism reinforced by an uncritical approach to the Bible in matters of ethics, science, and history. It would be difficult, for example, for a Pentecostalist to reject the biblical teaching that homosexuals were bound for hell. Morrison did so on May 14, 2019, but only after first evading the question and then only through very gritted teeth.

Pentecostalists, like many conservative Christians, would accept that God made men and women equal. As a Pentecostalist, Morrison would endorse this view, but with the standard qualification — equal but different. Pentecostalism is more committed in principle than many other Christian traditions to the equality of men and women. But in practice, in the church and in the home, patriarchy rules.

Morrison’s own married life reflects the belief that, as obedient wives and mothers, women are fulfilling God’s intentions for them. That said, on issues around domestic/family/sexual matters, women are accorded a particular sphere of wisdom way beyond that of men (“I may need to ask Jenny!”).

More liberal versions of the Christian tradition endorse the words of Jesus: “I was a stranger and you welcomed me” (Matthew 25.35). More conservative traditions like Pentecostalism privilege Jesus’ division of people into the eternally saved and the eternally damned (Matthew 25.46).

On this conservative account, only born-again Christians will gain salvation. Muslims, Jews, Hindus, Buddhists and atheists are all doomed to spend eternity in separation from God. As the website of the Pentecostal Australian Christian Churches puts it: “We believe that our eternal destination of either heaven or hell is determined by our response to Jesus Christ.”

Morrison takes pride in his government’s harsh treatment of asylum seekers, virtually none of whom are Christians. His immigration policies seem far more motivated by the Christian division of the world into the saved and the damned than by a Christian vision of compassion towards the stranger at the gate.

Next — The Morrison government, the ALP and Christianity