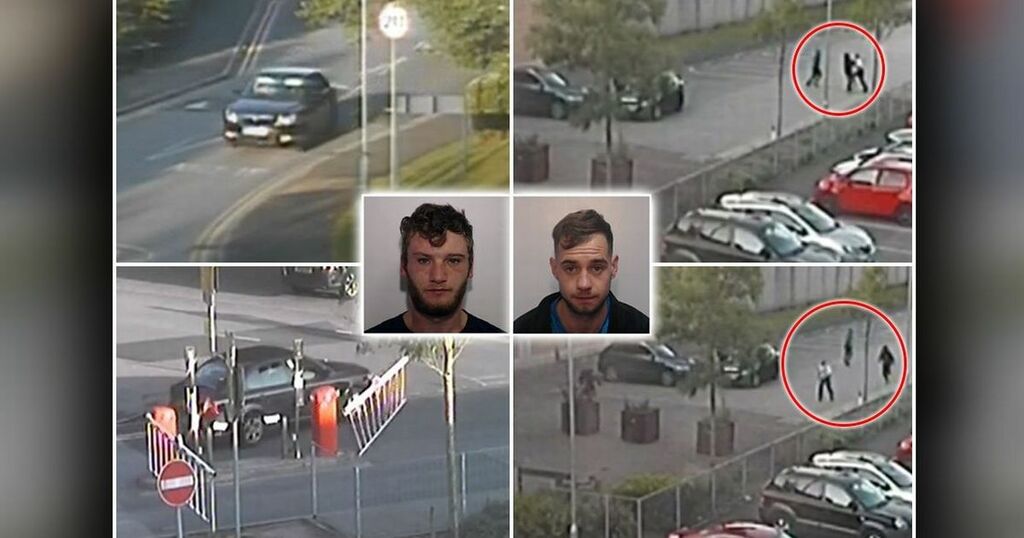 This is the moment two prison officers were targeted by three men in an attack of ‘retribution’ at HMP Forest Bank.

As the two officers finished their shift at the prison in Agecroft, Salford, they walked across the car park separately before being subjected to the terrifying assault.

Driving a stolen Skoda Octavia, Jordan Taylor, 27, stopped the vehicle, before Michael Morrison, and Jack Thompson, both 26, jumped out and approached the first officer.

Morrison had hold of a baseball bat and ran towards the officer swinging the bat at him, but the man managed to put his arm up in self defence before he was struck.

Morrison then smashed the glass doors of the visitor centre before going back to the car.

However, as they went to leave the car park, driver Taylor, of Salford, did a u-turn, smashing through the barrier and driving at the other officer who had to jump out of the way to avoid being struck.

The total damage caused to the prison was estimated at over £5,000, Manchester Crown Court heard.

Fortunately, the officers were not seriously injured.

In shocking footage played to the court, the officers can be seen fleeing in fear after the attack.

The first officer runs back to the prison and is chased by Morrison who then began damaging the glass panes of the doors.

Then as they leave, the car sharply moves towards the second officer who is forced to jump backwards.

Prosecuting, Duncan Wilcock said that it was around 8pm on July 20 of last year when the first officer saw the stolen Skoda drive towards him before stopping one metre away.

“He was able to see three people inside wearing face coverings covering the bottom half of their faces and hoods up over their heads,” he said.

“He noticed one of the men appeared to be holding a baseball bat.”

As the front passenger, Morrison, got out, he was holding the bat, the court heard.

The officer saw him raise the bat above his head as he came towards him, and heard him say: “You’re dead” before swinging the bat towards him.

He moved his arm to block the bat before running back towards the prison.

As he called the police he heard the car crashing through the barrier before speeding away.

He suffered heavy bruising and swelling to his forearm.

Meanwhile, the other officer left work just after 8pm and was walking towards his car when he heard banging and a ‘commotion’ coming from the visitors centre and saw ‘somebody dressed in black’ smashing the glass doors.

“The male appeared to be holding a bat,” the prosecutor continued.

“He turned and saw him stop, then the driver of the vehicle drove towards him and he believed he was going to be run over.

“As he drove at him, he managed to get out of it’s path and jumped backwards as the car stopped in front of him.”

He then ran back towards the prison as the Skoda drove off, further damaging the barrier.

In a statement, the first officer said he was left feeling ‘traumatised’.

“I’m trying to keep a straight face for my family, they were worried when I took the job that something like this might happen,” he said

The other officer said: “I don’t go to work and expect to be assaulted.

“This incident has shaken me and I felt I could have been seriously injured.”

Taylor was said to have 15 previous convictions for 31 offences, the majority of which relate to driving matters and drugs offences. At the time he was subject to recall.

Thompson was said to have 19 previous convictions for 27 offences, including an offence of robbery in 2017 for which he was jailed for 64 months. He was on licence when these offences were committed in July.

Morrison was said to have nine previous convictions for 16 offences including conspiracy to escape lawful custody.

Upon his arrest, Morrison was found to have a cannabis farm in his home, with an estimated street value of £12,000.

Mitigating for Taylor, barrister Jane Dagnall said the offences were ‘spontaneously committed rather than significantly planned”.

“A particular decision was made to cause damage to the prison estate, it was not just the seeking of revenge on these particular officers.”

Mitigating for Thompson, barrister David Pojur said: “He accepts his part in the enterprise - this was an unsophisticated offence.”

Mitigating for Morrison, barrister Ellen Shaw said: “He was very clear that he didn’t want any excuses made for him. He accepts his actions were selfish and he knows this will impact his family more significantly than him.”

Sentencing, the Recorder of Manchester, Judge Nicholas Dean QC said: “You carried out what must have been a premeditated, if not planned and targeted attack.

“An attack of retribution.

“None of you have fully explained what you did, but it can only sensibly be depicted as anything other than a form of revenge and retribution on the prison estate and prison officers generally.”

Taylor, of Chomlea Manor, was jailed for 49 months and banned from driving for 50 months after admitting offences of attempting to cause GBH and criminal damage; as well as driving whilst disqualified and handling stolen goods from a separate incident.

Thompson, of Withington Road, was jailed for 45 months after pleading guilty to attempting to cause GBH and criminal damage.

Morrison, of Thorn Court, was jailed for 57 months after admitting attempting to cause GBH and criminal damage, and separate offences of offering to supply cannabis and producing cannabis.