Much has changed since Anglo-Bahraini squad 2 Seas Motorsport was last a full-season entrant in the British GT Championship in 2020. Although it won at Snetterton that year with Jack Mitchell and Jordan Witt, the team’s frequent struggles with unreliability on the McLaren 720S GT3 were a drain on time and resources.

“We were employing really good guys, but all of their expertise couldn’t be used,” recalls team co-owner Nick Cristofaro, “because we were always focusing on having to keep the thing going. Motorsport is all about making things better and faster, where with the McLaren we never had any performance meetings – it was always meetings of how to make things better within that car.”

After exploring options with Porsche, and finding that only one car was available, 2 Seas changed allegiances to Mercedes last year. Then, Cristofaro says, “everything was flipped, we literally just focused on performance.” But plans to field cars in both the Pro ranks of GT World Challenge Europe and the DTM came to naught, and the team ran only a limited programme in 2021, although it won on its sole British GT appearance with Hunter Abbott and Martin Kodric at Silverstone, and claimed two victories from as many weekends in International GT Open with Kodric and Ethan Simioni.

The squad won too on its most recent race outing in January’s Gulf 12 Hours, Kodric, Ben Barnicoat and Cristofaro’s 2 Seas co-owner Isa Al Khalifa following up their victory from the previous year’s event with the McLaren. It’s not a team interested in half measures and, with a significant contingent of former Strakka Racing engineers and mechanics on the staff who have plenty of experience with the car, there’s every reason to expect 2 Seas to be in the thick of the fight in 2022 with Lewis Williamson and James Cottingham on driving duties.

“The guys we have are really intelligent and we’re lucky to have them because it’s all about those little two per cents that add up at the end of the day,” says Cristofaro, who has also expanded 2 Seas into the Fiesta Junior Championship with a single-car entry for karting graduate Aaron Walker. “With the Merc, we can work to maximise those two per cents and, when you put it all together as a package, that was why Silverstone went so well.”

For accomplished historics racer Cottingham, this will be a first full season in modern machinery, but he gave an indication of what to expect with a stirring drive in last season’s Brands Hatch opener in RAM Racing’s Mercedes before tangling with Adam Balon at Paddock Hill Bend. If he can build on that, then Cottingham could be a dark horse for the title together with 2010 McLaren Autosport BRDC Award winner Williamson, a driver with plenty of Mercedes experience and eager to capitalise on the latest opportunity of a stop-start career.

The 32-year-old Scot, who beat the likes of Tom Blomqvist and Jack Harvey to earn the prestigious prize and a test with the McLaren Formula 1 team, was a GP3 race winner in 2011 and appeared destined for the top as part of Red Bull’s junior roster. But, after being abruptly axed by Helmut Marko only five races into the 2012 Formula Renault 3.5 season with series newcomer Arden Caterham, his career lost momentum. A GP3 return beckoned, but no more wins came. By the end of 2013, his single-seater dreams were over.

“No-one took it harder than myself,” Williamson says. “It was my career and it got cut short there. Time went on, I went back to a normal day-to-day life and working as an apprentice fabricator and welder and I thought to myself, ‘How can I get back into racing?’”

"I’m just there to do the good job for the team – I hope people can see I’m capable of driving as fast as a Pro, but also being a good team-mate to a less experienced driver and working well with him" Lewis Williamson

The “life-changing” answer came in the form of Strakka boss Nick Leventis, who brought him into the fold in 2016. Williamson made a winning debut in the short-lived Renault Sport Trophy at Motorland Aragon and raced the team’s venerable Gibson LMP2 four times in the World Endurance Championship. He continued with the team for the next three years for its switch to GT racing – like 2 Seas, initially with McLaren before swapping to Mercedes for 2018 and winning the Blancpain Endurance Series Pro-Am title with Leventis and Chris Buncombe.

Williamson credits his time at Strakka with helping to rebuild his confidence, but Leventis was banned for violating anti-doping rules and the team folded after the 2019 season. Williamson made only two competition appearances in the following two years, racing McLarens for 59Racing at Imola in 2020 and 2 Seas in last year’s Gulf 12 Hours, intended as a precursor to a full season.

But now he’s a man in demand once again. Williamson has a parallel programme in Lamborghini Super Trofeo Europe with Oregon Team – a squad he’d impressed in his 2016 RS01 outings – and has linked up with 2 Seas for his first participation in a domestic championship since he finished runner-up in the 2010 Formula Renault 2.0 UK series.

“If I could, I’d race every single weekend, every day,” says Williamson, who doesn’t have a manager or “anybody else shouting my corner” to open doors. “I’m very grateful this year for the opportunity with 2 Seas. Now we’ve just got to keep the ball rolling.”

There’s everything to play for this season following the withdrawal of Barwell’s reigning champions Leo Machitski and Dennis Lind, with the adoption of Pirelli’s new P Zero DHF tyres another unknown Cristofaro says will require a “completely different approach” to manage.

Williamson certainly isn’t lacking in motivation, but says he’s focused more on the bigger picture of helping Cottingham than benchmarking himself against RAM Racing’s Mercedes factory driver Jules Gounon. He was, after all, satisfied with his performances relative to long-time works driver Gary Paffett and IMSA ace Tristan Vautier when they raced together for Strakka in the 2019 Intercontinental GT Challenge. He’s also reunited with his engineer that year, Barclay Danaher, and is optimistic of hitting the ground running.

“Two or three years ago, that might have been a big thought on my mind,” Williamson says, “but I drove with some factory drivers in 2018 and 2019, so I’m well aware of what I can do in that car and I did more than a good enough job back then. I’m just there to do the good job for the team – I hope people can see I’m capable of driving as fast as a Pro, but also being a good team-mate to a less experienced driver and working well with him.

Williamson praises 2 Seas for its “phenomenal job in preparations”, not least in managing to continue with a planned test at Oulton Park the day after an electrical fire at its Aylesbury premises threatened to jeopardise its pre-season.

“It was painful to see something like that when you’ve put every minute of every day into it, and that you’ve woken up for the last two years thinking about how to build it up,” says Cristofaro. “It was two years of struggling through a pandemic and this year we thought, ‘We’ve got customers, it’s going to start getting easier.’ But the whole team is unbelievable. We’ve got a lot of guys where the harder it gets, the more determined we are. Everybody makes it happen.”

If determination is anything to go by, 2 Seas will surely be a British GT Championship contender in 2022. More will be needed than that, of course, but the ingredients are in place for a new challenger to shake up the established order.

What else is new in GT3?

New cars, drivers and teams mean there’s an air of change about British GT this year.

Century Motorsport returns to the GT3 ranks for the first time since 2019 with the new BMW M4 GT3, which makes its UK debut with Taiwanese driver Betty Chen. Her co-driver will be Angus Fender, who raced Century's M6 GT3 in 2019 and spent the 2020 season in a 2 Seas Motorsport McLaren.

Among the highest-profile newcomers is factory Mercedes driver Jules Gounon, who joins RAM Racing to partner two-time reigning Pro-Am champion Ian Loggie. Calendar clashes mean Gounon will be replaced by Callum Macleod, who won at Silverstone alongside Loggie in 2019, for the Silverstone, Donington Park (May) and Snetterton meetings. RAM is back to two full-season entries, with 2020 GT4 champion Jamie Caroline stepping up to the top class alongside John Ferguson, his co-driver for two rounds last year in the Speedworks Toyota.

"The whole team is unbelievable. We’ve got a lot of guys where the harder it gets, the more determined we are. Everybody makes it happen" Nick Cristofaro, 2 Seas Motorsport

Caroline isn’t the only GT4 champion to make his debut in the domestic GT3 class – 2017 winner Will Tregurtha will partner GT4 graduate Mark Sansom in an Assetto Motorsport-run Bentley. Another GT4 Pro-Am contender from last year, Nick Halstead, steps up in a Fox Motorsport McLaren 720S alongside Jamie Stanley.

Their former Balfe team has cut ties with McLaren and thrown its lot in with Audi after running an R8 LMS GT3 in International GT Open last year. The now Evo-upgraded model will be raced by two returning drivers: Balfe team patron Shaun Balfe and the vastly experienced Adam Carroll, both previous race winners who will be strong if they can adapt the car to suit the new Pirellis after running on Michelins last year.

Meanwhile, Paddock Motorsport pair Martin Plowman and Kelvin Fletcher have switched from Bentley to McLaren, making the Woking marque the best-represented on the grid with six entries. 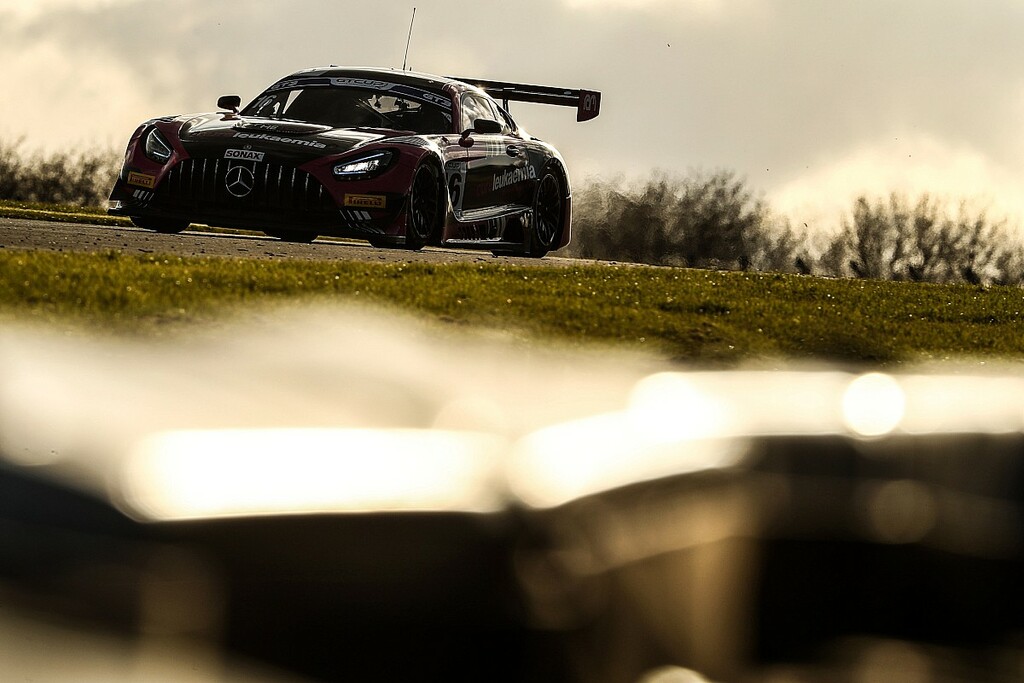 The dark arts "revolution" giving British GT teams a brain workout
Pirelli has completely overhauled its tyres used in GT3 competition for this year, with the new rubber getting its debut…

The 750 Motor Club season got underway come rain, shine and a bit of hail at Croft last weekend with…

Autosport
Ten things we learned from the 2022 Australian Grand Prix

American teams have been few and far between in Formula 1 history, but several have achieved distinction in the world…