The many questions arising from QES data 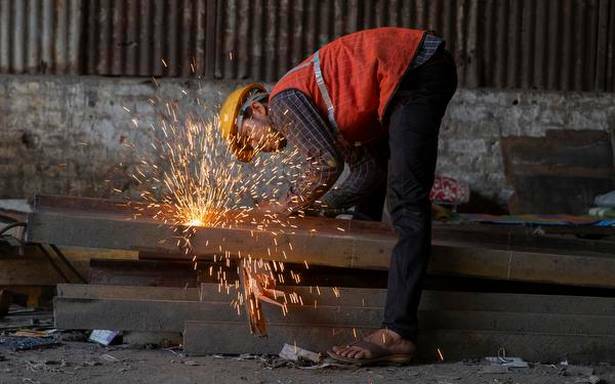 The Labour Bureau released the results of the All-India Quarterly Establishment-based Employment Survey (QES) for the first quarter (FQ) of 2021 (April to June). The survey covers establishments employing 10 or more workers in the organised segment in nine sectors (manufacturing, construction, trade, transport, education, health, accommodation and restaurants, IT/BPO, and financial service activities). These sectors account for 85% of the total employment in establishments employing 10 or more workers as per the Sixth Economic Census (EC), which serves as the basis of the QES survey. The data for QES were collected either telephonically or through visits. The report cautions that “verification of records has not been resorted to for collection of data”. This could have significant implications for the statistics generated from the survey. While the QES provides a demand side picture, the National Sample Survey or Periodic Labour Force Survey (PLFS) gives the supply side picture of the labour market.

The stated objective of the QES is to enable the government to frame a “sound national policy on employment”. India ratified the International Labour Organization’s Employment Policy Convention, 1964, which requires the ratifying countries to implement “an active policy designed to promote full, productive and freely chosen employment.” India does not have one till now.

The recent QES estimates are unreliable

The PLFSs have not presented an encouraging picture of the labour market. The CMIE has been projecting a distressed labour market scenario, especially during the pandemic. Notwithstanding criticisms, the CMIE database has dominated the analyses and understanding of the labour market. This could be quite irksome to any ruling party. Thus, the government needed an ‘official’ database that projects a rosy picture of the economy and the labour market (remember the controversy over the release of the PLFS results in 2019, which showed the highest-ever unemployment rate of 6.1%). The government has also been using the payroll data periodically to show formal employment generation and/or recovery in employment during the pandemic. It is not surprising that the QES has reported a simple growth rate of 29% in employment in FQ2021 over 2013-14 (Sixth EC).

The remarkable simple growth rate reported above compares a normal period to a pandemic-ravaged period. The overall growth rate is incongruent with macro-economic factors and other labour market portrayals. The CMIE data revealed a rather discouraging picture in April as the salaried class shed an estimated 3.4. million jobs from the level in March 2021 and the urban unemployment rate was as high as 9.78%. Further, normal economic indicators like income growth rates, capacity utilisation, business confidence, aggregate demand measured by the Purchasing Managers’ Index and the Reserve Bank of India’s growth rates of high-frequency indicators during the pandemic did not show encouraging trends even though they were fluctuating. The provisional estimates of annual national income for 2020-21 showed contraction in manufacturing (-7.2.%), construction (-8.6%) and trade (-18.2.%), which are some of the sectors covered in QES. The real national income growth rates, though controversial for upward revisions, declined 2017-18 onwards — the annual average growth rate in 2013-14 to 2020-21 was 4.95%. Are we talking of employment growth despite economic slowdown – from jobless growth to job-loss growth to growthless job growth?

A disconcerting picture behind the headline numbers

Various surveys and reports, including those by the Central government, showed that the smaller establishments suffered much more than the bigger industries. This was surely more so during the more extensive lockdown period, April-June 2020, when they faced challenges concerning debt repayment, wage/salaries and statutory dues. They are also least likely to have permanent workers on their payroll. Given that nearly 75% of the estimated establishments employed less than 40 workers, as reported in the QES, one wonders about the credibility of two statistics reported in the report. One, that 87.5% of the estimated workers were regular workers and just about 2.1% (12.5% in construction) were casual workers. Two, even though excluding health and financial services, around 24-35% of the establishments were operational from March 25 to June 30, 2020, 66-86% of estimated employees received full wages including in the construction, trade and hospitality industries. We should treat these statistics as claims by employers rather than reliable data.

The report throws up another perplexing statistic. It says contract workers accounted for 0.7% (IT/BPOs), 10.4% (manufacturing) and 17.6% (construction) and overall a measly 7.8%. According to the Annual Survey of Industries for 2017-18, 36.37% of the total workers are employed in the organised factory sector. However, the reported contra-statistics in QES are plausible because given the low employment demand, cost-minimising manufacturers would be more likely to engage permanent and possibly unionised and high-skilled workers while the flexible category workers will have to queue up for employment till better times come. On the flip side, the report concedes a decline in the share of female workers from 31% in the Sixth EC to 29% in FQ2021. Like the Sixth EC, it could have collected data on social aspects like caste and religion as the pandemic would have had differential impacts on social statuses of workers. The data on the formalisation of establishments as revealed by registration under the laws must take care of two aspects. One, there could be overlaps between the registrations (say, factories or shops registering under more than one law). Two, since this is an employment survey, it is relevant to consider labour laws under which the establishment can be registered like the Factories Act, Shops Act or the Building and Other Construction Workers Act and employ workers rather than including tax laws as QES does.

We need to wait for unit level data to generate data at the disaggregated levels and create cross-tabulations to understand the labour market dynamics much better than the ratios released in this report. At any rate, the F12021 QES must be considered as a starting point of the new data set rather than as a continuum of the Sixth EC as the Seventh EC would enable sensible comparisons. Finally, it is baffling why the Labour Bureau has initiated five segmented employment surveys when it could have put in place a high-frequency labour market information base like most advanced economies.