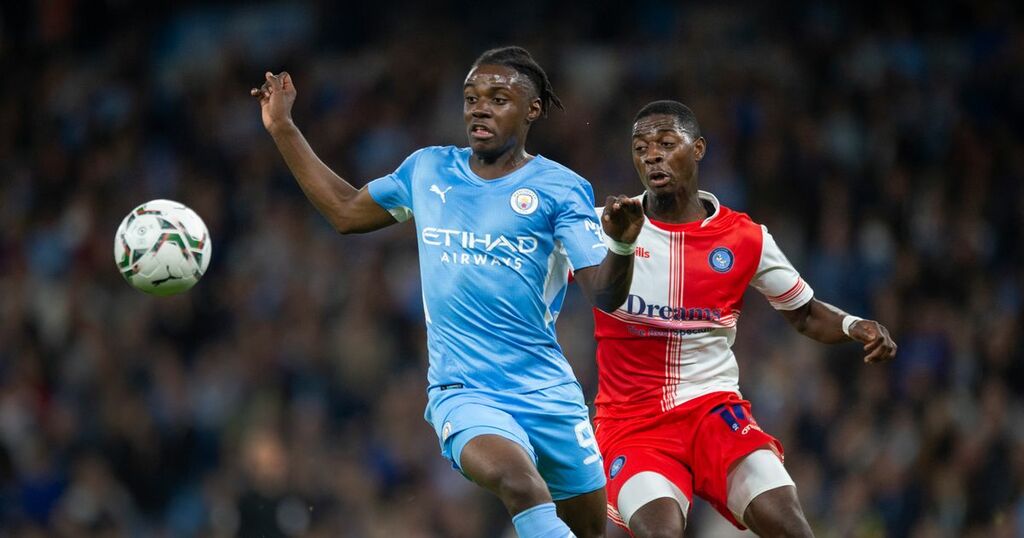 When it has come to the art of producing football's next big talents, Manchester City have not failed to deliver the goods in recent years.

The likes of Jadon Sancho, now of Manchester United, Atletico Madrid right-back Kieran Trippier and blossoming City star Phil Foden are just some of the names to have stepped off of City's production line.

Whilst Sancho and Trippier have commanded big transfer fees in their time, Foden has cemented himself as a key fixture within the plans of City boss Pep Guardiola, highlighting just how big an adventure he has been on since joining the club at the age of just four-years-old.

Now, City have a new wave of talent beginning to knock on the door of the first-team, including the likes of Cole Palmer and Liam Delap, who both have no shortage of potential stuffed within themselves.

As such, two more names can now be added to City's list of youngsters to watch, in the shapes of midfielder Romeo Lavia and winger Luca Barrington.

Lavia, who is a 17-year-old Belgian, has earned a place on The Guardian's Next Generation 2021: 60 of the best young talents in world football list, which picks out 60 exciting youngsters from across the world that should be closely monitored in the years to come.

The Belgian, who has played for his country at both Under-15 and Under-16 levels, joined City from Anderlecht in the summer of 2020 and has already made his first-team debut, starting the 6-1 win over League One side Wycombe Wanderers in the Carabao Cup last month.

As well as being handed his senior debut by Guardiola already this season, the youngster, who has previously been described as a "rare talent" by former City skipper Vincent Kompany, has also been an unused substitute in the Premier League twice.

While Lavia has earned himself a place in the Next Generation 2021: 60 of the best young talents in world football list , fellow City youngster Barrington has also earned himself some attention.

The winger has made it onto The Guardian's Next Generation 2021: 20 of the best talents at Premier League clubs list, alongside several other exciting names.

Barrington, who plays predominantly down the left-wing, is only 16-years-old and is already attracting plenty of plaudits. He has made a fine start to this season, too, scoring two goals and claiming two assists in five appearances for City's Under-18s in the Under-18s Premier League.

In a similar position to Foden, Barrington joined City a very young age, joining the club at the age of just six-years-old.

With that in mind, he will be looking to follow in Foden's footsteps and become the latest player to live the ultimate fairytale.