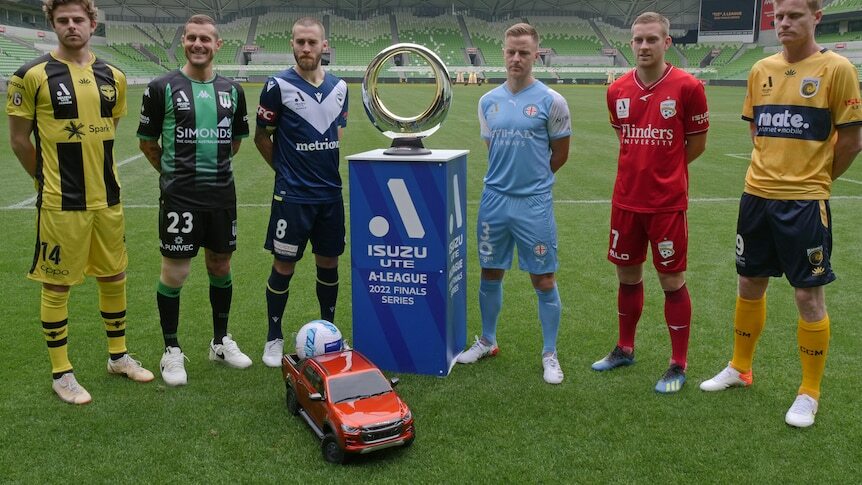 A-League Men 2021/22 finals preview: the contenders, the pretenders, and the best of the rest
After a tumultuous season interrupted by border closures, international tournaments, and injuries galore, the A-League Men is finally in the…

ABC News
A-League Men finals: how the contenders for the championship shape up

On paper, Melbourne City have the best team but their cross-town rivals Victory are in red-hot form and don’t rule…

A look back at our updates ahead of the FA Cup finals, the Championship playoffs and the penultimate weekend of…

The Lowedown: Amazing Ange the pride of a nation

In a week of much footballing news, this is surely the one that resonates most remarkably with Australian football fans?

Ange Postecoglou does what he does best, in a season that started as a rebuild and finished with glory, and claimed a fourth championship with, from memory, only his fifth senior club.

That is some sort of record (even if I've forgotten an appointment or two).

Add to it an Asian Cup, built on the back of World Cup qualification and a brave belief-building approach to a difficult group, and you are looking at an impressive, nay imposing coaching record.

He has a philosophy, he has a way of convincing his players to buy in, his teams are attractive to watch, but most importantly they win.

So they secured the title with what was described as a nervy 1-1 draw at Dundee United. Who cares.

I like that his teams can play with panache, but when the going gets tough - as it has when Rangers pressured them relentlessly for periods in recent clashes and tested their resolve by going forward with haste - they bunker down and get the dirty work done.

There is a deal of pragmatism to go with the expansive philosophy and a sense of self belief matched only by a thickness of skin, that worked beautifully with the many doubters and critics of his appointment.

Beyond the naysayers, believe me, it would have taken a lot of skill to sway a hard-nosed group of players that an Aussie, via the J-League, was the man with the answers to turn around a club who had finished 25 points behind their greatest rivals the season prior.

The nation should be very proud of your achievements and the benefits that can flow on from such success.

Back at home, and the first matches in the finals will be played tonight and tomorrow afternoon.

Western United host Wellington in one sudden-death showdown. Adelaide will take on the Mariners in the other.

It may look a simple choice of both hosts advancing, but Wellington were good when they might have folded against Melbourne City on Monday night and the Mariners are more than competitive wherever they play.

That said, I think the two favourites might squeeze through in tight matches.

Western United need to find a clean sheet again, and their set-piece prowess and quality in transition should see them through.

I have enormous respect for what the Mariners and coach Nick Montgomery have achieved and produced this year, but I fear Adelaide away is one of the hardest places to win.

The Reds have also finished the season with three spaced home games, which should leave an advantage in the petrol tank.

They also have high speed up front and in Craig Goodwin a player who can provide width, thrust and an X-factor in what should be a compelling contest.

The lowest-placed winners on the weekend will face Melbourne City, and the highest-placed victors face Melbourne Victory in two-legged home-and-away contests played midweek and next weekend for a place in the grand final on May 28.

The Jets finished their season on Thursday night by defeating Perth Glory at McDonald Jones Stadium 3-1 to guarantee participation in the Australia Cup next season, which is important for preparation and competitive matches preceding the A-League season as much as the silverware on offer.

Perhaps we saw Brazilian Daniel Penha sign off with a cracker?

And teenager star Archie Goodwin displaying his finishing talent to provide hope for the future?

We will have a more thorough look at the Jets season and the view of the future in coming weeks, I'm sure.

Meantime, enjoy a feast of football, home and abroad, in coming days.

A-League Men 2021/22 finals preview: the contenders, the pretenders, and the best of the rest
After a tumultuous season interrupted by border closures, international tournaments, and injuries galore, the A-League Men is finally in the…

ABC News
A-League Men finals: how the contenders for the championship shape up

On paper, Melbourne City have the best team but their cross-town rivals Victory are in red-hot form and don’t rule…

A look back at our updates ahead of the FA Cup finals, the Championship playoffs and the penultimate weekend of…