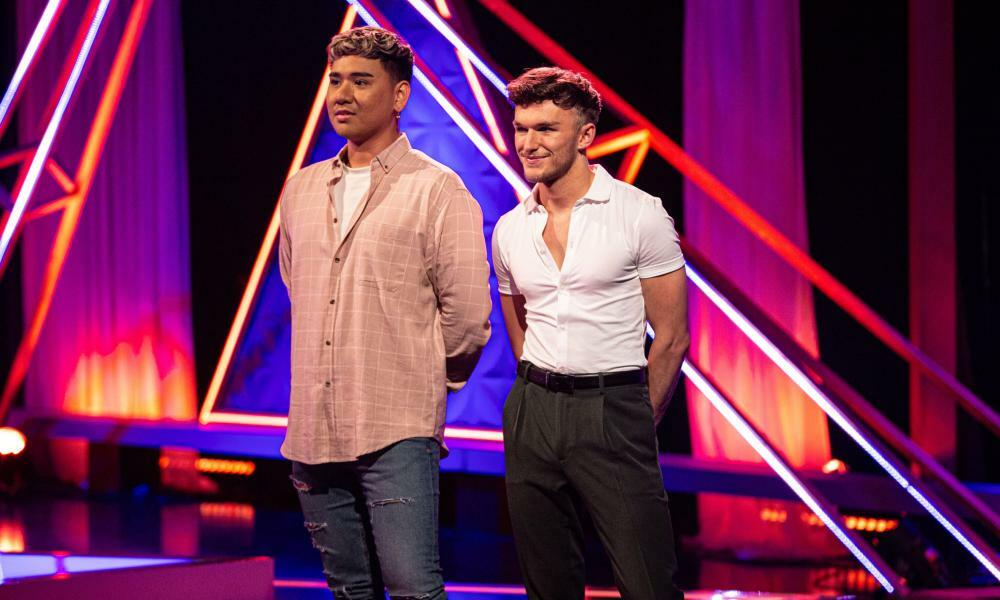 The British should not be allowed anywhere near sex. We are too easily embarrassed and we’re uncomfortable doing anything that cannot be performed ironically. Add a light entertainment format to the mix and we are doomed from the off. See: ITV’s recent attempt at irreverent sexytimes Apocalypse Wow, except don’t because it will make you want to bang your head on a table.

Ditto The Love Triangle, a throuple-themed dating show first shown on E4 and now – for some unfathomable reason – being aired on Channel 4 itself. Overseen by the excellent comic Desiree Burch, the series aims to match singletons with couples who are ready to add a third set of genitals to their dreary dyad. There is a touch of Blind Date to proceedings, with couples and singles unable to see each another while they converse. Hilarity is aimed for – and does not ensue.

Why? Because there is no escaping the bathos of descriptions such as “Contestant B is a true crime writer from Tamworth” or “Leia is from Andover”. There is no place of English origin that doesn’t introduce an inescapable note of melancholy to proceedings and thereby hamstring them.

Besides, the programme itself is underbaked and inept. The questions couples are given to ask the unseen contestants were clearly scribbled on the back of a fag packet and chucked to Burch as she went on set: “What would surprise us about you?”, “Where would you take us on holiday?”, “How do you feel about religion?” In the second round, the couple describe their differences, which makes Mr & Mrs look like it was written by Myers-Briggs themselves.

It remains inert because nobody can relax and enjoy it. Because the audience giggles nervously instead of laughing heartily. Or as heartily as it can, given that Burch’s scripted lines (she’s great off book) and voiceover links from drag queen Bimini Bon-Boulash include such deathless gags as “Let’s see if a triple could be their tipple!” and – after a mention of Napoleon’s birthplace Corsica as a holiday destination – “Why Bonaparte when you could bone together?!”

Above all, it is dire because, unlike every American, no Brit is born camera-ready. We remain stubbornly, unchangingly a collective two drinks below par. The few moments of genuine levity are wholly accidental and stem mostly from a contestant called Theo who is, inadvertently, the best thing in it. Theo is alive and technically animate, but only the trained eye can tell. His expression doesn’t change and his voice does not fluctuate in any way that suggests that it is registering either positive or negative emotion.

Theo is the partner of lively, blonde, bisexual Leia. Theo was “a bit taken aback” when she proposed bringing another woman into the relationship. “I was like – why?” he says, although I’ve put the question mark in. Burch asks him, as they stand in a studio full of lights, set dressing and people, how he’s feeling now he’s had more of a chance to get used to the idea. “Definitely excited,” he says, as unmoved as any human being in history has ever been.

Burch turns to Leia. How’s she feeling? Leia is definitely excited. She says that she often starts thinking “A girlfriend might be nice!” when she’s got a boyfriend. “I don’t tend to get it the other way round,” she adds.

There might be a show with these two, but it’s not this one.

Things improve slightly with the second couple, Jeff and Nate, who have a little more in the way of entertainment energy. But the show soon saps them of most of it. At one point they are required to ask one singleton if he prefers noses or calves. “Calves,” replies he after a baffled pause. “Because … all noses are beautiful.”

My goodness, it’s a long hour as each throuple-to-be is urged through two question-and-answer rounds, each one pointlessly and painfully recapped by Bimini and their basket of laborious puns to fill another unforgiving minute. A singleton is eliminated at each stage. Then the survivor and the couple must stand on the three illuminated points of a triangle, pressing buttons to indicate yes or no to the potential three-way. If every side of the triangle then lights up, then it’s funtimes for all – if one (or more) does not, then they must part ways. And so, I’m afraid, must we.