By David A. Graham 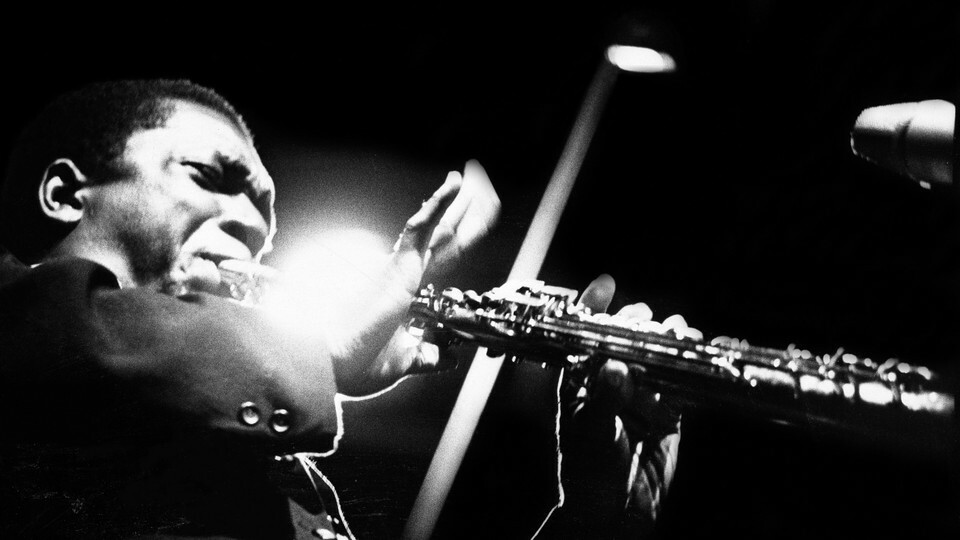 One Saturday in October 1965, John Coltrane did something unusual: He picked up his tenor saxophone and led his band into a performance of his masterpiece, A Love Supreme, a work he rarely played live. That evening in Seattle, the ensemble unfurled a revelatory rendition—looser and more raucous than the recorded version, losing none of its devotion but trading solemnity for ecstasy.

“Everyone knew that something very, very special had happened,” David Friesen, who played as a member of the opening act that night and is now a prominent bassist and composer, told me. “It’s hard to put it into words. You know?” Moments like this are ephemeral, preserved only in the minds of lucky attendees, few of whom have ever spoken about the concert. The music was lost to the ages.

Except it wasn’t. This month sees the release of a long-unknown amateur recording of the show, titled A Love Supreme: Live in Seattle. Over the past few years, several new Coltrane albums have emerged, including the strong Both Directions at Once and the pedestrian-for-Trane Blue World, but the latest is the most remarkable, because it compels a new understanding of one of the most important and well-known jazz compositions of all time.

[Read: The jazz great behind one of the most famous pairings in music history]

The release’s remarkable story begins with the saxophonist Joe Brazil. Though unfamiliar to most jazz fans, Brazil had a knack for connecting players and a passion for making amateur recordings. In the 1950s, his Detroit home was a hub where local and national touring artists, including Coltrane, would meet, swap ideas, and compete musically. In 1961, Brazil moved to Seattle to work at Boeing, and his band opened Coltrane’s 1965 sets at the Penthouse, a club in town.

Several years ago, the Seattle-based saxophonist and journalist Steve Griggs set out to gather every scrap of information he could on Coltrane’s Seattle shows. Brazil’s widow, Virginia, eventually shared a cache of quarter-inch tapes with Griggs. Brazil sometimes played his recordings for friends, and a few have leaked over the years, such as a 1958 recording of Coltrane with a very young Joe Henderson, but most were long unheard. “Virginia didn’t really know what she had. She knew it was important to Joe’s legacy and it was voluminous and taking up a lot of space, but she didn’t know what to do with it,” Griggs told me.

Griggs began sifting through the haphazardly labeled tapes. Some bore famous names such as Miles Davis and Cecil Taylor. Another contained a calculus class Brazil was taking. One label read John Coltrane A Love, with the date October 2, 1965. When Griggs started listening, he heard Brazil’s set. “They play a few tunes, and then silence,” Griggs recalled. “And then the next sound is the opening fanfare to A Love Supreme. And it’s like, Oh my God, what?”

It was as though Griggs had stumbled upon the jazz equivalent of a duplicate Mona Lisa—her enigmatic smile intact, but with fair hair and an unfamiliar landscape behind her. No one knows why Coltrane decided to play A Love Supreme that day. Historians are aware of only a few live performances of the suite: one a very faithful rendition from a 1965 jazz festival in France, released as part of a 2002 reissue; another, at a church in Brooklyn, that was not (as far as we know) recorded. The pianist and Coltrane expert Lewis Porter surmised that Coltrane viewed the work as fit for a formal audience, not a nightclub crowd. But it was an awkward fit for a concert hall, too: The original recording is just 33 minutes long, and its somber closing could make it a bit of a downer.

A Love Supreme fits strangely in the small canon of records adored even by very casual jazz listeners. Davis’s Kind of Blue, a similarly universal favorite, offers complexity for aficionados but is also easily legible to neophytes, with its hummable melodies, orderly solos, and consistent swing. A Love Supreme has none of that. It’s a noisy, challenging record, from the clatter of Elvin Jones’s cymbals to Coltrane’s sometimes caustic tone to the thud of the pianist McCoy Tyner’s chords.

Though Coltrane was Impulse Records’ star artist, the producer Bob Thiele hesitated over the record, hoping for something more commercial, like Coltrane’s hit 1961 rendition of “My Favorite Things.” Yet A Love Supreme became one of the best-selling jazz records ever, a testament to the immediate intelligibility of Coltrane’s spiritual yearning. Unlike some other avant-garde milestones, it doesn’t demand a music-theory degree or a high tolerance for skronk.

[Read: Why did this band re-create jazz’s most famous record note for note?]

Famous jazz records present a paradox: The essence of jazz is improvisation, and it is music meant to be performed live. Any recording is simply a document of a single performance of a piece. Jazz has sometimes been referred to as “America’s classical music,” but as I wrote about a puckish, note-for-note 2014 re-creation of Kind of Blue, that well-meaning label is misleading. But because so few versions of A Love Supreme exist, it’s easy to think of the piece as graven in stone. The Seattle recording shatters that illusion. The music is recognizably A Love Supreme—here’s that opening riff; there’s the familiar serpentine melody of “Resolution”—and yet something else entirely.

“This music is always in process,” Griggs said. “It’s never fixed. It changes every moment. And I think with the fascination with recorded performances, sometimes it’s easy to lose that sense of how mercurial the music is, and how it is a fleeting and at the same time precious thing.”

Across 75 minutes, the musicians explore the elasticity of Coltrane’s composition. After his introduction, Coltrane prods the band with a cowbell insistent enough to soothe Christopher Walken’s fever. The bassist Jimmy Garrison takes a long solo. Tyner interweaves balletic right-hand runs and thundering chords from his left. He and Jones volley ideas back and forth—a rollicking triplet pattern, a grand rubato—seeming to anticipate each other’s every step, even as they hurtle forward.

The telepathic connection had been built over thousands of sets, but Coltrane’s band was about to splinter. Though he’d had the same core quartet for years, he’d begun adding musicians, such as the saxophonist Pharoah Sanders. Also sitting in on the bandstand in Seattle were the young saxophonist Carlos Ward and bassist Donald Rafael Garrett. Within months, Tyner and Jones would leave Coltrane’s band, dismayed at its ever-noisier sound; two years later, Coltrane would be dead at 40. The Seattle performance captures a band exerting incredible strength but perhaps tearing itself apart in the process.

Even with the three extra musicians, the group almost certainly hadn’t rehearsed the piece. If you turn the Seattle tape up, you can hear Coltrane giving directions. (The recording, while cleaned up by modern engineers, is impressively high quality for an amateur tape.) Yet the leader recedes somewhat from view, happy to give space to other musicians. Friesen described an almost magical effect of watching the group.

“​​As I was sitting listening for the first maybe 10 seconds, I noticed Coltrane, McCoy, Elvin, Jimmy Garrison,” he said. “After that, they became less, and the music became more. And that’s the important thing. One of the important things about Coltrane’s music is he subtracts himself out of the equation.”

A Love Supreme: Live in Seattle creates a similar inversion. The familiar recorded rendition of the suite begins to shrink, and the essence of the composition—an amalgam of Coltrane’s written parts and the musicians’ live inspiration—emerges. At the end, one of the musicians, perhaps as dazed as the listeners, can be heard asking, “Is that the end?” Coltrane replies, “​​It better be! It better be, baby! Yeah!” Thanks to Joe Brazil’s long-lost tape, Coltrane was wrong.