The key factors for Melbourne, Geelong, Port Adelaide and the Western Bulldogs heading into the AFL preliminary finals 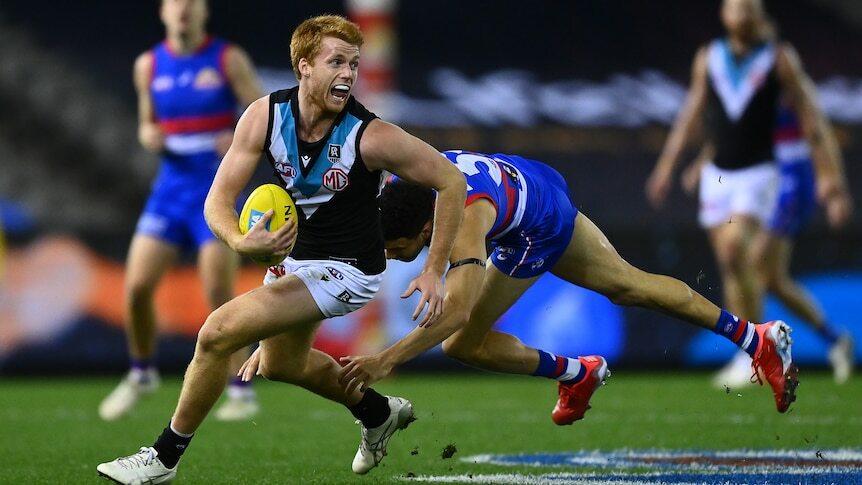 Part of the AFL's enduring appeal is that no two seasons are ever the same.

Every year, all 18 clubs reset to zero points. Over the course of a long and arduous campaign they're whittled down to a final eight. Some clubs will rise from the previous year, while others will fall. The favourite for this year's flag, Richmond, failed to even reach the finals after a wretched run with injuries.

Any game can turn on one moment, whether that be a spilled mark or a fortunate bounce. For the Brisbane Lions, any little bit of extra luck could have seen them playing this weekend. Instead, they'll be sitting at home, pondering what next season will bring – just like the other finalists who've been dispatched in the past fortnight: Sydney, Essendon and GWS.

It was about halfway through the season that Western Bulldogs faithful were again daring to dream. Who could blame them? Up until round 22, the Dogs had a top-two spot locked down, and playing fast, attractive football.

For Port Adelaide fans, their optimism was somewhat more restrained. After a harrowingly close loss in last year's preliminary final, the Power hovered a rung below the league's pacesetters for much of the season, with legitimate questions about their record against top-eight opposition.

But then Port caught fire, just as the Bulldogs began to slide. Form can be a fickle thing. As good as the Bulldogs were in the first 10 weeks of the season, Port has been even better in the past eight.

Since injuries to Stefan Martin, Adam Treloar and Josh Dunkley, the Bulldogs have struggled to maintain momentum in creating scores from stoppages. By contrast, the Power's midfield, led by Travis Boak, Ollie Wines and a returning Robbie Gray, have punished their opponents.

Port's midfield group is diverse, and can win contests in a variety of ways. Ken Hinkley is willing to deploy Gray and Boak deep forward, to drag their opponents away from their action and to create mismatches. Willem Drew, little-known before this year, has provided some much-needed grunt.

On the outside, Karl Amon has developed into one of the AFL's best outside midfielders, able to work both ways.

While the Bulldogs have slowed since their fast start, it's hard to keep a good team down. As many were writing them off, Luke Beveridge and his staff were working on ways to address their issues on the fly.

So far in the finals, it's worked. Despite having a makeshift ruck set up, the Dogs have been able to win first ball at both centre and stoppage clearances. Treloar and Dunkley seem to have found their feet, and add to a deep midfield rotation.

As the season progressed, the Dogs provided opportunities in the middle to a wider range of players, giving them valuable experience before the finals. While the earlier results were less than optimal, it looks to be paying off now.

In the absence of key forward Josh Bruce, the Dogs have also worked out alternative avenues to goal, with Bailey Smith and Cody Weightman contributing strongly in the past two weeks. The Dogs' adaptability and versatility has been impressive.

The Dogs and Power are one-all from their two encounters so far this year. But the third and deciding match on Saturday night will be the only one that really counts.

Coming into this season, Geelong's forward line was being heralded as perhaps the one thing that could separate it from the rest of the pack. During the trade period the Cats were able to add Giants star Jeremy Cameron to a unit that had already outscored every other team last year.

Cameron gave Geelong a second tall option to play alongside the man who'd succeeded him as the league's leading goal kicker, Tom Hawkins. On paper, it appeared a match made in heaven. In reality, their partnership is still a work in progress.

Cameron has struggled with injuries in his first season at the Cattery, missing nine games this year. The Cats' attack has dropped from second in the competition to ninth for points scored per inside 50, with the sum of its parts so far proving to be greater than the whole.

There have been tantalising glimpses of what's possible, such as the round eight match against Richmond in which Hawkins, Cameron and Gary Rohan combined for 15 goals. But in a game where the link between the forward line and the midfield is key, their connection has been patchy at times.

During the finals, the Cats have gone even taller in attack. Esava Ratugolea has returned to their best 22, providing another contested marking option. Cameron, Hawkins and Ratugolea are all capable of working up the ground to assist with the ball retention. Having three mobile big men can be nightmarish for the opposition to try to match up.

The trio has played together nine times this year, for a record of eight wins and one loss. In those games, the Cats have lost the contested mark count just once, and the marks inside 50 count just twice. The signs are emerging that, when it really matters, the Cats forward line could be as dangerous as advertised.

While Geelong's forward line was hyped before the season, Melbourne's backline has exceeded expectations. Once considered the Demons' Achilles' heel, it's become one of the most-feared defensive units in the league.

A lot of the plaudits fall to Steven May and Jake Lever, and for good reason. Lever not only led the league in intercept marks, but also for points generated from intercept marks. While Lever isn't widely noted as a great creator, good things tend to happen when he gets his hands on the ball.

In recent weeks, teams have tried to tag Lever with a defensive forward, but it's had little effect. Lever has a sublime ability to read the ball in flight, and has been given licence to come off his opponent when he deems necessary. He rarely makes the wrong decision. May takes fewer intercept marks but is flexible enough to play on both talls and smalls. He's often given the job of neutralising the opposition's most dangerous forward.

But Melbourne's defensive stocks run much deeper than the two 2021 All Australians. As a unit, they move together and work as one. Melbourne's press begins high up the ground, trapping teams inside their own attacking 50.

Last year, defensive work inside 50 was one of the Demons' biggest weaknesses, with coach Simon Goodwin telling ABC Sport earlier this year that it was one of their priorities for improvement during the off-season. Their work has paid off, with Melbourne leading the league for tackles inside 50 per game.

Not only that, the Demons have been able to stop opposition sides from easily waltzing out of their backline. No side has conceded fewer points per game from passages of play starting inside their own 50. Melbourne has been able to effectively build a wall to help generate repeat attacks.

Geelong's attack has long been methodical. The Cats like to retain possession and slowly pick teams apart. If they can maintain their composure on Friday night, they may be able to absorb Melbourne's frenetic pressure.