Like every presidential conversation with a foreign leader, this one had scripted talking points and a predigested news release recounting an exchange yet to take place.

Aides in the White House situation room clustered around a speaker phone, pens and pads in hand to document what they heard.

At 9:03am on Thursday 25 July, they listened as Donald Trump picked up the phone in the White House residence and was connected to Volodymr Zelensky, the newly elected president of Ukraine. Within minutes, two note-takers exchanged troubled looks.

Trump had not merely veered off his talking points. By the conversation’s end, he had asked Zelensky — a leader in dire need of US military aid to fight the Russian-led invasion on his eastern border — to “do us a favour” by investigating one of his political rivals and an unfounded conspiracy theory about the 2016 election.

That 30-minute conversation has now emerged as a mortal threat to Trump’s presidency. This week, the House of Representatives begins public hearings that could lead to the impeachment of a president for only the third time in US history.

More than half a dozen Trump administration officials have called the phone conversation and the events surrounding it insidious and shocking. Five officials who dealt with Ukraine have resigned since September.

The unfolding story is in many ways a sequel to the events that led to Robert Mueller’s investigation into Russian interference in the 2016 election. Once again, the plot involves foreign influence in an election and is centred in the post-Soviet sphere.

Only one day before Trump spoke to Zelensky, Mueller had testified to Congress about how the Russians had tried to help elect Trump by organising the theft and release of emails damaging to his opponent. In that case, the Russians were the pursuers who sought contacts with Trump’s campaign.

Now the president and his minions were the aggressors, seeking help with the 2020 re-election effort.

They asked the Ukrainians to investigate unfounded allegations about former vice president Joe Biden, one of Trump’s leading Democratic rivals, as well as to chase a conspiracy theory that Ukraine, not Russia, had intervened in 2016.

The story is also another chapter in Trump’s war on the wheels of US governance, from the intelligence community to the diplomatic corps to Congress itself.

In his zeal to win Zelensky’s compliance, the president ousted the US ambassador to Ukraine, froze congressionally approved military aid, shut out foreign-policy experts in the National Security Council and sidestepped the State Department to set up a back-channel to Kiev with his personal lawyer, Rudy Giuliani.

The Ukraine saga is yet another episode in which Russia is the potential beneficiary of White House decisions.

Trump not only sought to muddy the picture of Russia’s role in the 2016 election, but also withheld nearly $400m (£311m) in military aid, a tenth of Ukraine’s defence budget, for its war with Russian-backed forces.

The Russians “would love the humiliation of Zelensky at the hands of the Americans”, William B Taylor Jr, the top diplomat in Kiev who nearly quit in protest, testified to Congress.

This account of the effort to muscle the Ukrainians for Trump’s political gain is based on interviews with more than a dozen American and Ukrainian principals as well as thousands of pages of witnesses’ testimony in the House impeachment inquiry.

More details and revelations are likely to surface in the hearings that begin on Wednesday in the historic House ways and means committee room on Capitol Hill.

Zelensky’s election in April thrilled American foreign policy experts who had watched Ukraine struggle for decades in the shadow of Russian economic and military threats, seesawing between democracy and authoritarianism.

Zelensky hoped to cement a relationship with the US president. But even before he took office, his aides suspected that the route to Trump ran through Giuliani rather than the State Department or the National Security Council.

Giuliani and his allies had worked for months to force out Marie Yovanovitch, the US ambassador in Kiev, claiming, with no evidence, that she was disloyal to Trump.

Yovanovitch, whose superiors insisted that she was an exemplary public servant who had been falsely accused, testified that she did not know exactly why, but she believed that Giuliani and Trump saw her as an obstacle to their strategy for Ukraine.

Even before she was ousted, Giuliani and the president were levelling charges on Fox News against one of Trump’s main Democratic rivals, Biden.

As vice president, they claimed, Biden had forced Zelensky’s predecessor to fire a state prosecutor to quash an investigation of a Ukrainian gas company, Burisma, that had hired Biden’s son Hunter.

No evidence has emerged to support that charge or that points to any crime by Hunter Biden.

Trump had also embraced a fringe theory, debunked by extensive evidence, that a central event in the 2016 campaign – the theft of private emails from Democratic computers and their release on the rogue website WikiLeaks – had not been carried out by Russia, as both US intelligence experts and a criminal inquiry had proved, but by Ukraine.

Three days after Zelensky’s swearing-in on 20 May, Gordon Sondland, a Republican donor with no diplomatic experience whom Trump had appointed ambassador to the European Union, and Kurt Volker, a US special envoy to Ukraine, went to an Oval Office meeting. There they praised Zelensky as a reformer who deserved US support.

The president would have none of it. “They are all corrupt, they are all terrible people,” Trump retorted, according to Volker. He added: “They tried to take me down.”

Trump was apparently referring to Ukraine’s disclosure in 2016 of tens of millions of dollars in secret payments to Paul Manafort, Trump’s campaign chairman at the time, who had worked as a consultant to one of Zelensky’s predecessors.

Manafort was forced to resign from the Trump campaign and is now in prison for crimes related to those payments.

In the Oval Office, the president told both men to coordinate future Ukraine-related initiatives with Giuliani. “He just kept saying: ‘Talk to Rudy, talk to Rudy,’” Sondland testified.

And they did, creating a foreign policy back-channel that bewildered both Ukrainians and high-ranking administration officials.

Among those officials was John Bolton, Trump’s third national security adviser. Just days earlier, he had warned Fiona Hill, one of his top deputies: “Giuliani is a hand grenade who’s going to blow everybody up.”

On 18 July, a secure video conference call with national security officials was interrupted by the disembodied voice of an Office of Management and Budget staffer.

At the direction of Mick Mulvaney, the president’s acting chief of staff, the staffer said, the office had placed a hold on $391m (£304m) in military aid for Ukraine. Taylor, the top US envoy to Ukraine, said he listened “in astonishment”.

It was against this backdrop that Trump’s conversation with Zelensky on 25 July unfolded. The president told Zelensky that the United States had done much for his nation and raised the “favour” he wanted – the inquiries into the 2016 election and the Bidens.

What the Bidens had done “sounds horrible to me”, he said, according to a White House reconstructed transcript of the call. Trump added that Giuliani would be in touch. Zelensky assured Trump that a new prosecutor would investigate Burisma.

But Alexander Vindman, Bolton’s chief Ukraine specialist, who was taking notes on the conversation in the situation room, was staggered by the implications of Trump’s remarks.

He headed for the office of John Eisenberg, the National Security Council’s chief legal adviser, to question the propriety of the demand for investigations.

Eisenberg quickly shunted the official summary of the conversation to an electronic storage system normally used for the most sensitive classified information. Later, he instructed Vindman not to discuss the phone call with others.

Nonetheless, a CIA officer detailed to the White House got wind of it. On 12 August, he filed a whistleblower complaint. Word of the whistleblower complaint had reached the top echelons of the National Security Council. As soon as Congress learned of it in early September, three House committees opened investigations.

Volker called the transcript of the 25 July call “explosive” and resigned just before he testified.

Kent, the deputy assistant secretary of state, told investigators that Trump had stood US policy on its head. For decades, he said, the United States had demanded that leaders in Ukraine and other countries stop instigating politically motivated prosecutions of their opponents and uphold the rule of law.

Hill testified that she was “shocked” and “very saddened” by the transcript of the calls and documents. Together, she said, they confirmed “my worst fears and nightmares” that private interests had subverted America’s national security concerns.

Her former boss, Bolton, who resigned in September, has said he would not testify unless a federal court rules that he can legally do so.

But in a letter to the court last week, his lawyer suggested more is to come. Bolton, he said, knows of many other White House meetings and discussions about Ukraine that have yet to become public. 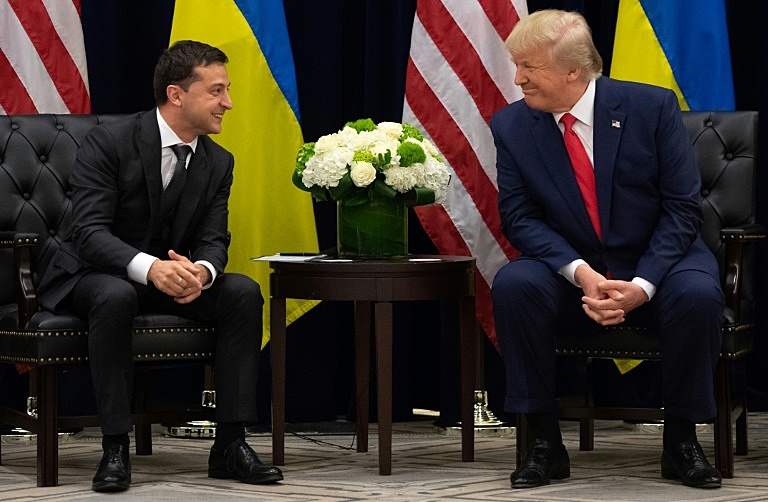 Donald Trump's Ukrainian path to impeachment attempt
Washington (AFP) - It started with a shadowy diplomatic campaign as Donald Trump bypassed official channels on Ukraine, and the…

AFP
One subscription that gives you access to news from hundreds of sites
Recap: Bill Taylor and George Kent testify in House's first public impeachment hearing

The American public finally got a front row seat.

Al Jazeera
Trump impeachment inquiry: Who has testified? What did they say?

More than a dozen current and former US officials testified behind closed doors in the Trump impeachment probe.

Al Jazeera
A viewer's guide to the impeachment hearings

Who's set to testify and why they matter.

Axios
One subscription that gives you access to news from hundreds of sites
Bill Taylor: Staffer Was Told Trump Cared More About Investigating The Bidens Than Ukraine

The testimony offers a clear link between Trump and Giuliani’s involvement with Ukraine.