The indecent exposure epidemic: ‘How are they not taking this seriously after Sarah Everard?’ 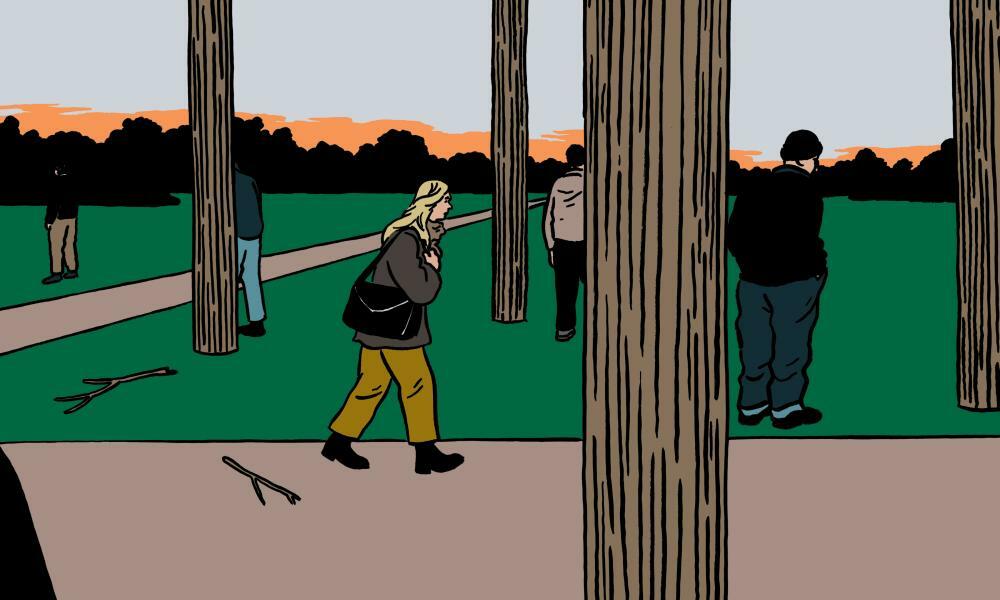 Because she was in a campervan, it wasn’t easy to get away quickly: Clara had to get out to fold away some seats. “I decided to jump out,” she says, “and when I looked at him, he was wiping ejaculation off his dashboard and looking at me.” She took a photograph of his car numberplate and drove away. But the man realised what she had done and gave chase. For 15 minutes, he tailed her through the streets of Glasgow. Frightened for her life, Clara drove to a police station, but the man turned off before she arrived.

Recent weeks have seen renewed focus on the crime of indecent exposure, after the sentencing of the Metropolitan police officer Wayne Couzens for Everard’s kidnap, rape and murder. Couzens, it has been subsequently reported, had a history of indecent exposure. In 2015, a woman reported him for indecent exposure to Kent police; the force is now under investigation for its response to the allegation. Couzens has also been accused of twice exposing himself to staff at a McDonald’s drive-thru, again in Kent, just days before he attacked Everard. Staff provided police with Couzens’s car registration number, but it appears that no action was taken.

Flashing, or to use its proper name, indecent exposure, is a crime punishable by a maximum two-year jail sentence. And yet so often it is dismissed as a matter of scant consequence; an unpleasant but inconsequential offence, committed by the mac-wearing pervert of popular myth. Canvassing women for this article, I was struck by how few hadn’t been flashed. Women had been flashed when they were children outside school, on public transport, from parked cars, in Topshop as 13-year olds, in the stairwells of multistorey car parks, and cycle lanes, and busy motorways. And parks, so many parks, usually by inveterate offenders who were known to police, who took no action.

Guardian analysis of Office for National Statistics (ONS) and Ministry of Justice data for England and Wales revealed that 10,775 indecent exposure cases were logged by police in 2020, but just 594 suspects were taken to court. The true figures are likely to be much higher. “The vast majority of women, if you talk to them, will remember an experience of being flashed,” says Dr Fiona Vera-Gray of Durham University, an expert on sexual violence and street harassment. “But most never report being flashed because they’re never sure if they will be blamed, or if people will think it’s their fault.”

I said to the police: You know where this is going. Stop him before it goes too far

“I started to panic,” Kwaten remembers, “because there were mums and kids walking towards us. I thought: ‘This could traumatise them.’” Kwaten filmed the man. In the footage, they repeatedly ask him to leave the park. When he refuses, they call the police. “I was really emotional and shaking and crying. But I felt like he was going to do it again, and I had an obligation to call.” Nearly an hour later, the police arrived, and told Kwaten they would visit that evening, to take a statement. Kwaten stayed up late waiting, but no one came.

The next day, Kwaten phoned again, but the police said they had been unable to find the flasher. Concerned for the safety of women and children in the park, Kwaten uploaded the video to Instagram. “I’m very fearful he will do the same thing again,” they wrote. The response was overwhelming. Twenty-five women told Kwaten they had been harassed or flashed by the same man. He had been banned from a pub for throwing a chair at a woman who refused to give him her number. He had followed women home. Some had reported him to the police, only for no action to be taken. Some residents had even set up a WhatsApp group about him a year previously.

When police finally came to take Kwaten’s statement, two days later, they said there was nothing they could do. “My mum said: ‘If you put two police officers in the park and patrol it for a week, you will find him. He will continue to do this again. He is dangerous. Something needs to be done.’” This was just weeks after Everard was murdered, and Kwaten mentioned the case. “I said: ‘You know where this is going. Stop this before it goes too far.’” The police told Kwaten that they had bigger things to deal with.

After the police left, Kwaten’s parents went to Arnos Park themselves, to see if they could find the flasher. They spotted him within 10 minutes, called the police, and he was arrested. He was later convicted of indecent exposure and put on an electronic tag.

Police routinely dismiss reports of flashing as time-wasting from hysterical women. When they do so, says the criminologist and academic Prof Jane Monckton-Smith, of the University of Gloucestershire, women “end up feeling like they’re the ones in the wrong. The police have better things to do than deal with their petty complaint. And so women begin to internalise that, and think: ‘I mustn’t bother anyone about this.’”

But the impact of being flashed can be lifelong, and profound. “It still upsets me all these years later,” says Dr Heidi Colthup, a lecturer from Wye, Kent. She was flashed and assaulted in 1986, when she was 17. “I just remember being terrified,” she says. Colthup’s assailant was convicted in juvenile court, but she is certain that police only took it seriously because her father was a police officer; the first time she tried to report the incident, without her parents present, she was sent away.

Colthup, who is close to tears during the course of our conversation, explains why flashing is so distressing. “You aren’t doing anything,” she says. “Just minding your business. And suddenly this man, completely unbidden, inserts himself into your life. It’s that total removal of control. We all like to think we are in charge of our own destinies and can do what we want. But flashing shows how flimsy that freedom and choice really is. Somebody – a man – can take that away from you.”

Victims of flashing carry around maps in their head, overlaid with the traumas of past encounters. Kwaten used to walk through Arnos Park every day. Now, they walk through congested streets, instead of enjoying the open spaces of the park. “Women have to limit their space and freedom because of the actions of some men,” says Vera-Gray. “They have to be hyper-vigilant in public. Because there are men out there who will seek to do them harm.”

And the fact is that flashers do cause women harm. “Flashing is an act of sexual aggression,” says Monckton-Smith. “It’s a red-flag behaviour. If someone has flashing in their past, I’d expect there to be problems in their future. It might not lead directly to rape, but it may lead to things like domestic abuse, coercive control, stalking and sexual violence.”

If police aren’t identifying dangerous patterns in offenders, they aren’t doing their job

She urges police to consider the psychology of the person flashing. “If we’ve got someone who’s fantasising about offending,” says Monckton-Smith, “they are going to have to take steps to get where they are going. Every time they take an extra step, that is an escalation in risk. Say someone has exposed themselves in an isolated place. They may do that until they feel comfortable with it, and then move on to the next step.”

Karen, a 69-year-old retired teacher from Woburn Sands, has sometimes wondered what could have become of her on the night she was flashed cycling home from work in 1999. A man was masturbating outside his car, in the road. “I stopped and looked back to try and get the car number,” she says. The man got back in his car and drove after her. It was a quiet country lane. As he approached, a woman walked down the road towards them. The man leaned out of the car window, apologised, and drove away. Karen reported his registration plate to the police. “They later told me that the very next day he raped someone,” she says. She questions whether her flasher intended to rape her, too. “If the other woman hadn’t been with me, might it have been different?”

Couzens murdered Everard just four days after he allegedly exposed himself at a McDonald’s. One 2014 evidence review found that 5 to 10% of flashers escalated their behaviour to more serious sexual offences. Harvey Weinstein is known to have masturbated in front of multiple women, without their consent. Were police to adopt a “broken windows” approach when it comes to indecent exposure, taking each incident seriously and prosecuting it to the fullest extent of the law, more serious crimes could be averted. “Indecent exposure is one of the least serious sexual offences,” says Monckton-Smith. “So in the hierarchy of offences, to the police, it can seem minimal. But one of the police’s key functions is the prevention of crime. If they aren’t identifying dangerous patterns in offenders, they aren’t doing their job.”

And existing law is not fit to protect women from the growing menace of cyberflashing. Defined as the practice of sending women and girls unsolicited “dick pics”, cyberflashing is not currently a criminal offence. In June, almost 90% of British schoolgirls surveyed told Ofsted inspectors that they had been sent unsolicited sexual photos. “What we know about cyberflashing is that it parallels indecent exposure for women in the sense of the threat they feel,” says Prof Clare McGlynn QC of Durham University, an expert in cyberflashing. Because men can use Bluetooth to send images to their victims’ phones, rather than, for example, emailing them, women who are cyberflashed in public may have no idea who is responsible. “Because you don’t always know who sent the image,” McGlynn says, “it’s difficult to risk-assess the situation. The fear of the unknown can be worse.”

If the events of the past few months have confirmed anything for Britain’s women and girls, it is that the streets are not safe. Police do not take our safety seriously, and sometimes wish to hurt us themselves. Which means that, for the foreseeable future, women will be consigned to live a half-life in public spaces: always watching for the men who would seek to do them harm, and the men who would excuse their behaviour.

When Clara goes out in her campervan on solo holidays, she doesn’t get out after dark, even if the sky is clear and the stars are beautiful. “That’s one of the saddest things,” she says. “So much of my life, I spend trying to be invisible. Because I don’t want unwanted male attention.”

• Information and support for anyone affected by rape or sexual abuse issues is available from the following organisations. In the UK, Rape Crisis offers support on 0808 802 9999. In the US, Rainn offers support on 800-656-4673. In Australia, support is available at 1800Respect (1800 737 732). Other international helplines can be found at ibiblio.org/rcip/internl.html