Although Joe Biden has often been the subject of memes related to his friendship with Barack Obama or his obsession with ice cream, he has lately become a different sort of internet figure, known as “Dark Brandon.” Basically, “Dark Brandon” memes are images of Joe Biden, except scary and powerful; and they have risen in popularity as the president recovers from COVID-19 and advances his legislative agenda. The first “Dark Brandon” I saw was a weirdly lit photo of a grinning Biden that makes him look like the villain in an A24 horror movie; the text explains that whereas Donald Trump got COVID and suffered symptoms of the illness, Biden got COVID and then announced the killing of the al-Qaeda leader Ayman al-Zawahiri via drone strike.

To comprehend why people are doing this, one must understand that liberals who spend too much time online have for the past several years been locked in a psychosexual showdown with Trump supporters who also spend too much time online. Each side is convinced that the other is incapable of crafting a decent internet joke, yet each side takes the other’s jokes as inspiration. Members of both groups live in a perpetual state of gloating, and of sneering, and of gloating and sneering at the same time. They are devoted trolls who like to post in a way that is inscrutable to most Americans, and their twisted relationship often produces strange results.

If Dark Brandon is the strange result du jour, two prior internet trends would seem to be its parents. The first was Trump supporters’ habit (with Trump’s encouragement and participation) of Photoshopping Trump’s face onto characters who are very cool and strong—such as Rambo, or a professional wrestler, or a guy walking away from a plane in a suit. This was maybe supposed to be ironic, but it did not always scan that way to outsiders. The Trump-as-Rambo images evolved, after Trump left office, into a niche category of “Dark MAGA” memes that portrayed him as an otherworldly being, in many cases shown with laser eyes, who would soon be raining down violence upon all who had defied him. The aesthetics at play were a bit antidemocratic, accelerationist, what have you; and mainstream coverage of the trend from this past spring cited propaganda experts on its allegedly alarming implications.

So that’s the “Dark” part. Then there’s “Brandon.” (I hate this.) Brandon posts took off last year when an NBC Sports commentator insisted that the crowd at a NASCAR race was chanting “Let’s go Brandon,” when in fact they were chanting “Fuck Joe Biden.” Trump et al. ran with the euphemized catchphrase and started selling merch. Then Joe Biden supporters tried to turn it on its head by creating a new catchphrase, “Thank You, Brandon,” which didn’t make any sense because that isn’t the president’s name. They were like, We’re taking their insult and flipping it! To me, it seemed more like they were just calling Joe Biden “Brandon,” but I guess I see what they were going for.

Putting those together, “Dark Brandon” became a joke about political posting that was popular among people who don’t really care about Joe Biden but do want to mock anyone who thinks Trump is Captain America or Scarface or whatever, and among people who wanted to poke fun at the idea that anyone would sincerely position Biden as a badass. The joke has since developed into something that reads as more sincere. Now professed liberals are changing their Twitter usernames to phrases such as “Standing with Dark Brandon” and “Joe Biden OUR Brandon Promises Made Promises Kept.” The profile pic for the latter user is a poster for the 2008 Batman movie The Dark Knight, but with Joe Biden’s head on Christian Bale’s body. Various members of the Biden administration have begun tweeting the “Dark Brandon Rises” meme, including the White House’s deputy press secretary, Andrew Bates, and its director of digital strategy, Rob Flaherty.

As with Hillary Clinton explaining Pepe the Frog or Mike Bloomberg purchasing meme ads on the WorldStar Hip Hop Instagram account, we have arrived at yet another shameful juncture in the meme wars. Maybe people at the tip-top of the Democratic political bureaucracy should not allude to their familiarity with the low-down internet. (Or, as the meme maker known as @dasharez0ne said about the Bloomberg memes, “STAY OUT OF OUR CULTURE AND WE WILL STAY OUT OF YOUR PENT HOUSE.”) Even before they got involved, the “Dark Brandon” meme was cringe—depicting, as it did in many instances, Joe Biden sitting on the throne from Game of Thrones (which reportedly originated as Chinese anti-Biden propaganda) or, as I’ve already mentioned several times, shooting lasers out of his eyes. I have also seen “Dark Brandon” memes in which Joe Biden is turned into a rapper, à la the “Notorious RBG,” or made to sport a full sweatsuit branded with the logo of Newport cigarettes, as well as gray cornrows. That last image is so horrible that it left me breathless.

On the theory that I might be missing something, I reached out to an avowed “Dark Brandon” fan and asked her to explain—and defend—the phenomenon. Allison Gill, a co-host of the political news podcasts Mueller, She Wrote and The Daily Beans, told me that the memes are simply funny. Joe Biden is the opposite of Trump, and he is the opposite of terrifying. To turn “one of the kindest men in Washington” into a laser-eyed menace, she said, is “antithetical and awesome.”

I asked her whether she’d considered the possibility that the memes were perhaps, actually, really embarrassing. “Dark Brandon” is ironic, she claimed, while the analogous Trump memes from MAGA posters are not. “They saw Trump as a badass mother-effer who’s going to eff people up.” I suggested that the line between sincerity and irony might appear faint when someone offers straight-faced praise of Biden’s political accomplishments and then posts an image of him licking an ice-cream cone, holding two $10 bills, while a sizable explosion goes off behind him. (Or walking away from a Trump billboard in slow motion, as the billboard topples over. Or wearing aviator sunglasses, captioned with the acrostic “Bringing Respect And Needed Dignity Back to Our Nation.”) Is this, maybe, an undesirable conflation of politics and fandom, and exactly the kind of behavior for which liberals look down at Trump supporters? And if it is not, wouldn’t Democrats have to concede that both categories of images—Dark MAGA and Dark Brandon—are so absurd as to be obviously ironic?

Gill allowed that maybe some liberals really do desire to imagine Joe Biden as a gloomy avenger in a sinister eye patch. After they spent years making fun of Trump supporters’ flags and costumes and cardboard cutouts, and saying that they would never engage in the same weird and cult-like behavior, perhaps the Dark Brandon trend really does have a whiff of hypocrisy. “Is this bringing us into weirdness?” she said, considering the question. “No, I think we’re just celebrating a nice guy in an ironic way.” I guess the irony is simply lost on me. 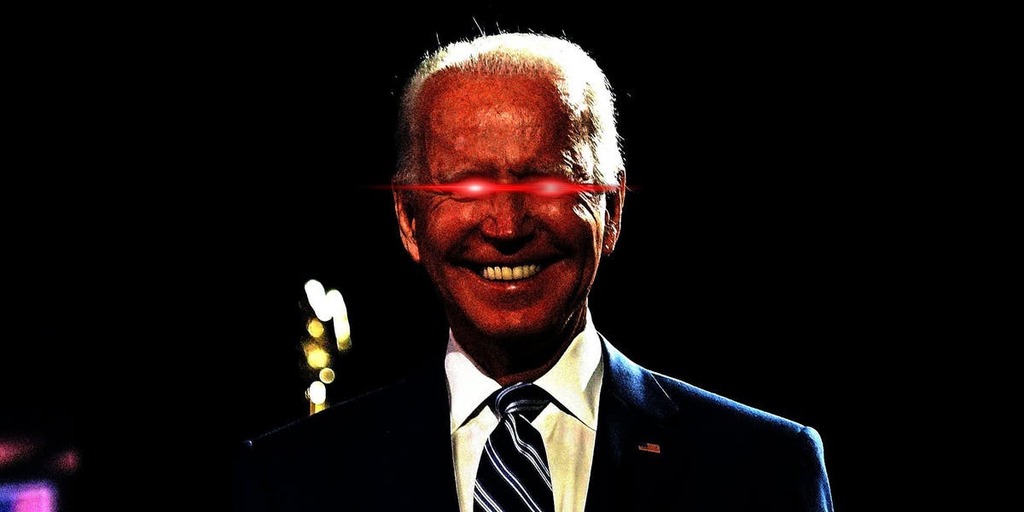 The Independent UK
From analysis to the latest developments in health, read the most diverse news in one place.
Joe Biden struggles to put on jacket, drops glasses after Kentucky visit

Evening Standard
Blake Masters Could Become the First ‘Based’ Senator

Why the online far-right has adopted Blake Masters, the 36-year-old Arizona Senate candidate.

Not all Republicans rushed to Trump’s defense after the FBI search. Here’s why.

Politico
The art of effective trolling

Sometimes you can say more with humor than with a polished speech or marketing spot.

Axios
One place to find news on any topic, from hundreds of sites.
This time Trump is trapped — and afraid

Donald Trump's lifelong grift is nearing its final act. Across America his power is fading — and he knows it