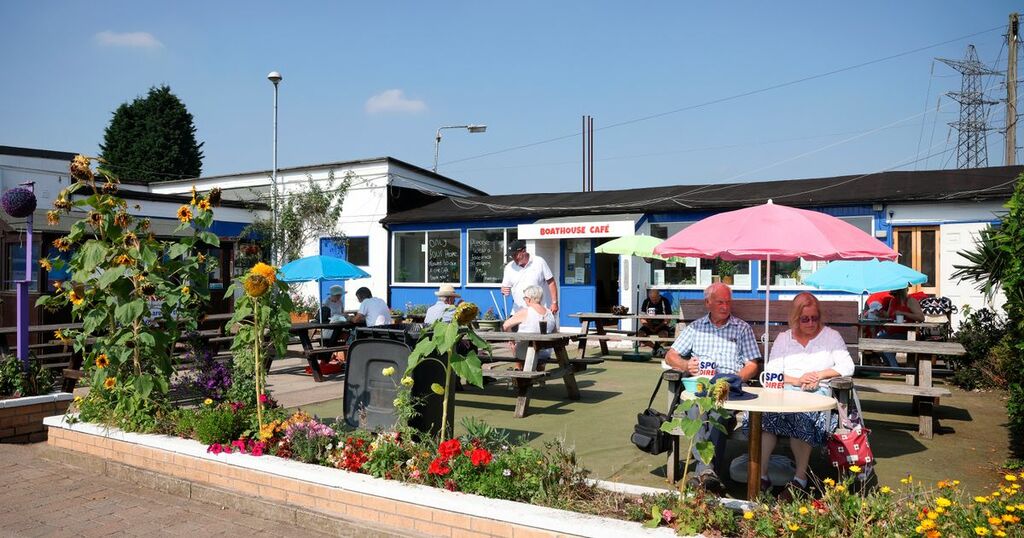 Whether arrived at by road, meandering pathway or along the canal - the first thing that will strike visitors to the Boathouse café is the view.

Flanked by a wide expanse of the glistening River Trent and lush fields and woodland beyond, not to mention the canal boats that dot the quay side, the setting is picture perfect.

And yet, the café is unassuming, tucked neatly in a boatyard behind the quiet streets of Beeston Rylands - the green walk from Attenborough nature reserve offering another entrance on one side and the pathway from Beeston Lock on the other.

Once customers have been bowled over by the view, the next thing they might notice is the wide smile and jovial chat of owner Tony Gayle, 56.

Along with his partner Sandie, the café boss has been at the helm for 14 years and as Tony bustles around, serving his regulars and giving a warm welcome to new faces, it's clear to see he's a big part of the draw for those who flock here.

That includes Beeston locals who've been coming since childhood and now bring their own kids and grandkids, to cyclists, runners, walkers and community groups.

Bigger chains might have upmarket interior or fancier menus, but the regulars here fall in love with the stunning setting, good food at good prices and an incredibly warm welcome.

"Café culture is big business these days but some of those big chains, I hate to say it, they've got no soul" says Tony who customers regularly refer to as a 'local legend'.

"I like to think that the Boathouse Café is a home from home for all who come here - it wouldn't work any other way.

"We've kept going throughout the difficult time of this pandemic by being part of the community, by being supported by those who visit us at the café all year long and by us supporting them.

"While we were closed, my partner and her daughter Sarah and myself have worked closely with Broxtowe Council to deliver food to those who were isolating and the girls are still doing that even though we're back up and running.

"We're all here for each other in The Rylands. When we took over this place, we wanted to make it a happy spot where people felt comfortable to come and that's happened. I feel like whatever we might give to the community by being their local café, they give back the same and it works. They are a big part of our success."

Proof of how loved the café is can be seen in the awards it's won since Tony and Sandie took over. The idyllic breakfast spot has been voted best park run café - beating the like of eateries on Bondi beach in Australia and Ireland's picturesque Cork, as well as scooping the crown in the first Canal & River Trust’s Waterside Hospitality Awards.

There's a tussle between the customers who love the place and Tony and his team over just what it is that makes this simple café so special.

Customers, including regulars Dave and Elaine Downing who've been travelling to the spot from Derby for decades, say Tony is the magic ingredient.

"But things really started to look up here when Tony took over. He's a ray of sunshine and always remembers a face - when I arrived today he patted me on the back and said 'I've known you for 14 years'.

"I remember the first day he came here, it was a Sunday and straight away I could tell he'd be great - he just draws you in. I'm a big fan."

Pam and Pete Humphreys from Wollaton visit the café at least two or three times a week and have done for years - they say Tony makes the place.

"We enjoy Tony's company," says Pam, 71. "We love the setting, we like watching the birds and herons on the river."

Pete, 76, added: "And the planes that come over the flight path. But Tony makes the place."

With its old school charm, other regulars love the sense of nostalgia that the Boathouse café brings.

Sisters Kerry Britten, 49, and Melissa Turton, 52, live in nearby Chilwell but grew up in the Rylands.

"There's a real sense of a connection to the community here," says Melissa.

"It brings back old memories for us of coming down here with our dad and it's full of characterful people."

"Tony even remembers people's birthdays and always give me a card and makes a fuss. He's a great guy."

While Tony might be the most recognisable face at the venue, it was his partner Sandie's business nose that led them there in 2007.

"I saw an ad in the Evening Post saying that the lease for the kitchen at the bar was free and we came along to work that at first.

"But there was news that the then Boathouse Café owners were moving on and I thought it would be great for Tony and I to run.

"I didn't tell Tony at first - there were a lot of secret squirrel conversations going on, but we were offered the lease and started working at the Café a week later," explains Sandie, 58 who is now retired.

There have been tough times in the area, such as when local hero Owen Jenkins tragically drowned at the weir in July 2017 after entering the water to help a friend.

"That was a terrible time, we know the family very well. We just did whatever we could to support them," says Sandie.

Although he's larger than life and happy to be the face of the place, Tony makes sure to credit his team for the hard work they put into the busy running of the café, which he shares with Sandie's daughter Sarah, 48 and full time staff member Laurie Law, 20.

But if the customers think it's Tony, Sandie and the ambience they've created that makes the hidden spot such a gem, they in turn whole heartedly believe that the community plays a bigger part in the success of the café.

"Beeston Rylands is a lovely community," says Sandie "And our café community includes our customers who come from further afield."

The pandemic has seen the café go through one of its hardest times, but its connection to the community has been the thread that's kept it together.

"After lockdown when we hadn't been able to claim any support, a lot of the regulars donated what they would have spent had they been coming as usual, to help us stay afloat."

"They're a great bunch and we love everyone who loves coming here," says Sarah "I often see our regulars out and about in Beeston and they always say hi. It's a nice feeling."

"They become our friends - if we have parties we invite them and we also get invited to theirs," adds Sandie.

"There's a customer who comes here 364 days a year," says Tony "He's in his eighties and never misses a day."

The staff can namecheck a long list of regulars who visit most days if not every day and while they're valued customers, it might just be the friendship and community that keeps them coming back.

Not forgetting the menu which offers good old-fashioned café fayre with hot drinks, a full English and a host of filled cobs and cakes as well as gluten-free options.

Café worker Laurie says: "The best part of my day is when customers say 'compliments to the chef!"

Tony, who is a originally a Birmingham boy, with Sandie and Sarah hailing from Reading all say they have found a home in the Beeston community they're part of.

Anyone who chats to them might just get the feeling that as well as being a place to meet and have a bite to eat, the Boathouse has turned into somewhere for them and everyone who visits to feel that they really belong.

The boathouse café is situated at The Quay, Riverside Road, Beeston Rylands and open 7 days a week, 9-3pm.