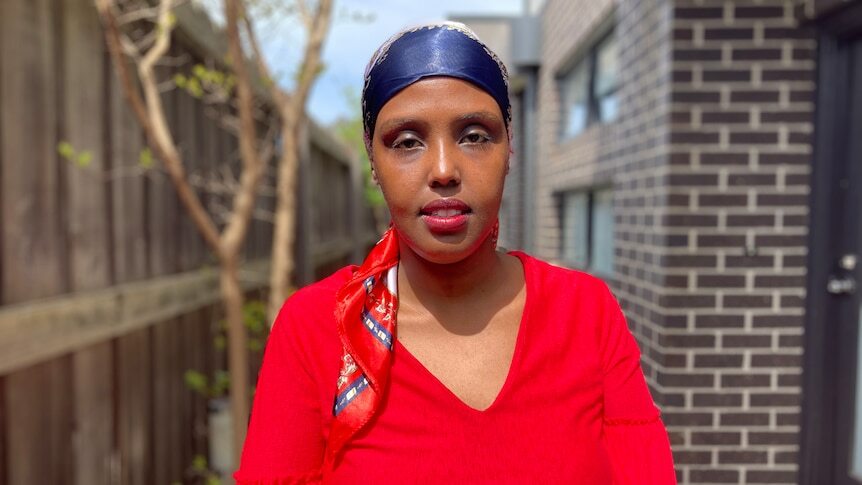 Muheden Elmi had survived years on the run from a government intent on killing him before he arrived in Australia.

For the 20 years he called Melbourne home, he could often be found at one of the Somali tea houses at the top of Flemington hill in the inner-north, chatting with friends.

At 68, he still loved swimming — ploughing the pool at the Brunswick Baths most days to keep in shape — attending daily prayers at the mosque, and making mischief.

His daughter, Ijabo Hassan, remembers him as a "wonderful dad".

"He was really funny, I get all my sense of humour from him.

Muheden didn't talk much about his homeland, but his experiences sparked in him a passion for freedom movements everywhere.

Among his most loved books, including the African classic "Things Fall Apart", were some about freedom fighters.

"He'd read through the books and go back through the paragraphs and write them down to practice his English," Ijabo says as she sifts through his collection and some of the notes he made.

When COVID-19 arrived, Ijabo and her siblings were especially worried about their father — an asthma sufferer who'd previously had health issues.

His children urged him to get tested regularly as a precaution, and in early July, 2020 he received a negative COVID-19 test.

On July 4, the state government locked down the North Melbourne public housing tower he lived in, to prevent spread of the virus within the building.

Police surrounded the towers, while workers in PPE went door-to-door.

Without their adult children there in person to translate and explain what was happening, Ijabo says her parents became scared and confused.

Then — the photos started to spread among the community.

Fearful of overwhelming the hospital system, the Victorian government set up a makeshift medical centre at the Melbourne Showgrounds to treat COVID-positive patients from the towers.

"It was a cement warehouse, cement floors … dark and gray with plastic fold-up chairs — it literally looked like a detention camp," Ijabo says.

Ijabo says paranoia and fear ripped through the older Somali residents, who believed the shed was where they would go to die if they got COVID-19, rather than a proper hospital.

"These are people who survived civil wars and dictatorships, and fled from governments and institutions that really did terrible things to them," she explains.

"So in that moment, with everything going on, their minds reverted back to that time and they felt the government was trying to do the same thing to them."

A few days after being locked down, Muheden tested positive to COVID-19, along with several other older Somali residents in the towers.

"Because they didn't trust the [health authorities] and they didn't take their help, everything exacerbated," Ijabo says.

"Within two weeks, when he [Dad] came out of detention lockdown, he was very sick. He was seriously sick."

The Somali community paid a heavy price in Melbourne's second wave in 2020.

The government will not release data on COVID-19 deaths by ethnicity, but by talking to community members the ABC has established at least 13 died from coronavirus last year, one of them in aged care.

That means Somali-Australians made up 7 percent of the 165 deaths outside of aged care in 2020, even though they are less than 0.2 percent of Melbourne's population.

An analysis of the council areas with the most COVID-19 deaths in 2020 and 2021 (excluding deaths in aged care) show they are home to some of highest concentrations of non-English speaking communities in Melbourne.

Experts believe people from CALD communities are at higher risk of contracting COVID because they're often more likely to be essential workers, who live in large households, in low socio-economic suburbs.

But doctor Nadia Chaves, who works with diverse communities through her role with co-health, is worried some may be dying unnecessarily because they're afraid to ask for help.

"I'm really worried … getting linked in to a health system, in the early stages of COVID, might mean you get offered some treatment to prevent you from getting sick," Dr Chaves says.

Despite countries like England, New Zealand and the USA releasing data on the number of COVID-19 cases in CALD communities, Australia and the separate states do not.

So it's impossible to know, apart from anecdotally, if COVID-19 deaths in CALD communities are over-represented.

Muheden’s family take him to a 'non-government' hospital

Ijabo says fear of health authorities continued to wrack her father after the towers lockdown ended.

By that time he had cleared the virus, but his body had been severely weakened by it.

Ijabo and her siblings convinced him go to a local hospital, but he was frightened by the experience.

"They (medical staff) wouldn't listen to him. He was telling them his symptoms … but he felt they were dismissing what he was saying," she says.

Muheden left the hospital, walked back home, and woke up the next morning worse than the day before.

His children begged him to return but he refused. Finally they struck a compromise: a private hospital.

The children told their father that those hospitals weren't run by the government, and that because patients pay for their own care he might have more of a say in his treatment.

Muheden stayed at the Epworth Hospital in Richmond for six weeks, where his condition continued to deteriorate.

His family brought him home on August 28 so they could all be together in his final days.

"We have our own traditional things we do, we thought maybe we could mend our dad back to health ourselves," Ijabo remembers.

But he died just a few hours after he arrived.

Doctors told the family it was due to complications caused by coronavirus.

Sainab Sheikh, who founded the Somali Women's Development Association, worked every day throughout the second wave to educate the community about the pandemic, translating materials and holding Zoom sessions in-language with the latest information.

She says some sick people in the community didn't reach out to health services because they felt shame, didn't know what to do or didn't understand the risk.

"Some people, rather than sharing that (burden) and seeking help, they just keep to themselves and that caused them death," she says.

"It is hard, because when you know those people, and their families or you know the person who passed away, it's really sad."

Ms Sheikh says some people in the Somali community ended up dying at home last year, without seeking any medical help.

That has happened at least twice this year, when two Eritrean women, one in her 40s and another in her 60s, were found dead in their homes with COVID-19.

The Victorian health department would not release data on how often it has occurred throughout the pandemic.

CALD communities still in ‘the eye of the storm’

Many of the hundreds of people who are seriously ill in hospital with COVID-19 at the moment are from Arabic-speaking communities in Melbourne's north.

Moustafa Fahour, the founder of the Islamic Museum of Australia, says he knows of at least four deaths within the Lebanese community since the beginning of Victoria's sixth lockdown.

He says Melbourne's Lebanese community has seen the "eye of the storm" when it comes to the impact of COVID-19.

"Being part of the Preston Mosque, which has the largest Islamic funeral services in Victoria, we've experienced a number of deaths within the Lebanese community as well as other communities," he says.

"It's devastating for the families, especially not being able to see them, most of them, while they were in hospital."

Doctor Mark Putland has been watching the COVID-19 impact on CALD communities play out every day.

He says the majority of the Royal Melbourne Hospital's last 350 COVID-19 patients in the emergency room were from a CALD background.

"I worked on a shift on the floor on Wednesday night, and that was certainly what we found there … it's kind of heartbreaking to be honest," he says.

"What we hate to see is an avoidable tragedy … when we have someone turn up to a hospital gasping their last breath with a disease that we could have treated," he says.

"Tragically, we have had cases that were kind of just a moment too late."

A fear of a repeat of last year

Since last year's COVID deaths, Sainab Sheikh and her colleagues have continued to educate the community about the virus, delivering COVID information sessions and heavily promoting vaccination.

"You don't want the same mistakes to happen again to our community," Ms Sheikh says.

"We need to do more and we need to improve our strategies towards to the community in terms of communication engagement and to make sure they're not going through what they went through last year."

Ijabo says she wants governments and health professionals to do more to gain the trust of CALD communities, so what happened to her father stops happening to others.

She and her siblings only recently paid back the $25,000 bill for Muheden's private hospital stay, but she feels grateful that her family was eventually able to convince their father to get help.

"Other [Somali] people had it so much worse," she says.

"Our family was one of the privileged ones."