An original recipe for a lemon Swiss roll and amaretti trifle has been crowned the winner of the Platinum Pudding competition, securing its place in British food history.

The winning dessert was created by copywriter Jemma Melvin, 31, and will now become the official Platinum Jubilee Pudding.

Inspired by Melvin’s loved ones and the Queen’s wedding day, the pudding will be gifted to the British monarch and British public as part of the celebrations to mark the Queen’s 70 years on the throne.

The Great Jubilee Bake Off!

According to the competition’s rules, a pudding ‘‘is steamed or baked, layered or rolled, a pie or a crumble, a cake or a tart’’.

In other words, the contest was open to interpretation. And boy did the public respond.

Some 5000 amateur bakers from across the UK entered their magnificent creations. And from there, only five finalists were selected.

Ms Melvin’s winning pudding was announced by Camilla, Duchess of Cornwall, on BBC One in a special program on Thursday.

Camilla is a patron of The Big Jubilee Lunch charity, which organised the competition together with Fortnum & Mason, the grocer to the royal household.

Her dessert now joins the table of other royal-inspired dishes like Coronation chicken, created by Le Cordon Bleu and served at the Coronation Luncheon in 1953.

“My inspirations are my gran and my nan,” Ms Melvin told Fortnum & Mason.

“My gran taught me how to bake, and she’s a very talented baker. She wouldn’t say that, but she is. And my nan – a wonderful, poised lady – was just the trifle queen, so this dish is an absolute tribute to them both.”

Ms Melvin chose to showcase lemon in her sweet treat after she found out the Queen had lemon posset at her wedding.

“And both my gran and my nan very much liked lemon as well, so it all just slotted into place.”

The first few versions of her winning dessert were a total lemon affair, but Ms Melvin didn’t think that was special enough for the Queen.

So she added the amaretti and mandarins.

How do you make it?

Lucky for us, Fortnum & Mason has already shared Ms Melvin’s recipe on its website.

“I wanted it to be the People’s Pudding, not just for the Queen, but the whole of the country,” Ms Melvin told the BBC.

You can find her winning recipe here.

In fact, the recipes by all five finalists are available on the Fortnum & Mason website.

Ms Melvin said she plans to make her winning trifle for the guests at her gran’s street party during the Platinum Jubilee long weekend. 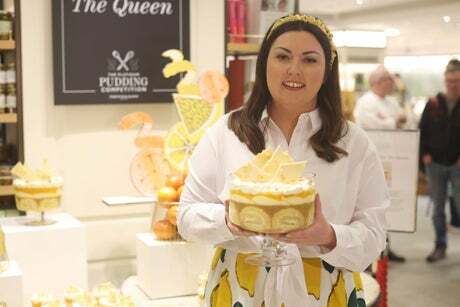 Platinum Pudding winner Jemma Melvin celebrates in Fortnum and Mason
Her trifle, made with lemon Swiss roll and amaretti, beat 5,000 desserts to become the official pudding of the Queen’s…

Evening Standard
One subscription that gives you access to news from hundreds of sites
A Trifle for the Queen: UK Unveils Jubilee Pudding Winner