The Good, Bad And Ugly From The Green Bay Packers’ Win Over The Cincinnati Bengals 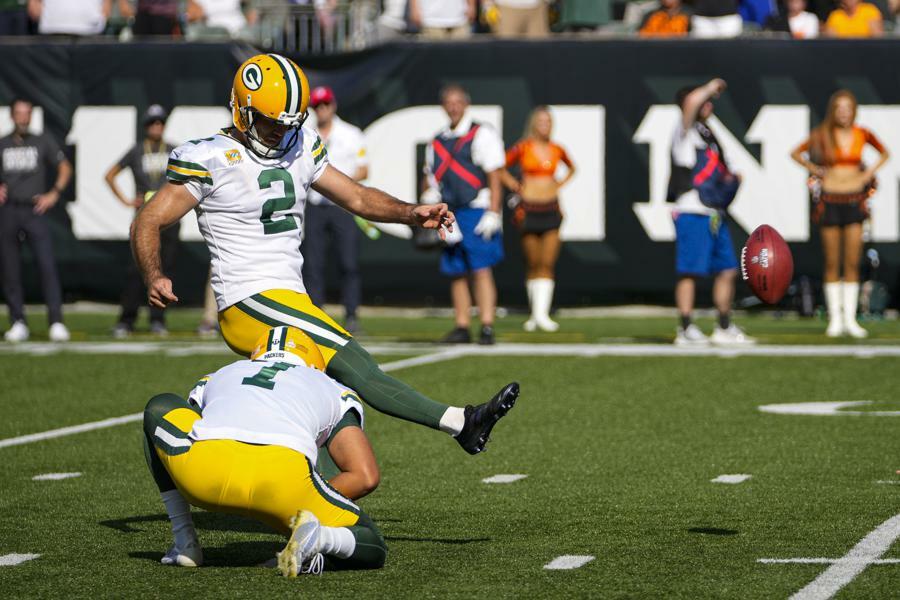 From goat — on three different occasions — to hero.

Green Bay’s Mason Crosby — one of the most reliable kickers in the game — missed three potential game-winning field goals in a span of just more than 4 minutes Sunday.

Finally, on his fourth chance to play hero, Crosby delivered.

Crosby drilled a 49-yard field goal with 1:58 left in overtime and Green Bay escaped Cincinnati with a 25-22 win.

“I mean that was a crazy end to that game. That’s insanity,” Crosby said. “The fact that we kept getting opportunities, you’ve got to give it up to our team, the way we fought to get in that position again and I just wanted so badly to come through there. It’s what I do. I had a couple go bad there and was really happy to hit that one.”

The Packers improved to 4-1, while the Bengals slipped to 3-2.

Here’s the good, bad and ugly from Green Bay’s victory.

DE’VONDRE CAMPBELL: The Packers signed Campbell off the street on June 9 for one year and $2 million. To date, Campbell has been the MVP of Green Bay’s defense.

On Sunday, Campbell intercepted Joe Burrow on the first play of overtime and returned the ball to the Bengals’ 17. That gave Green Bay a chance to win the game, but Crosby missed a 40-yard field goal two plays later.

Still, Campbell had another big game with eight tackles, one tackle for loss and the interception.

“I was talking on the sidelines today … and we just said, ‘How in the hell was this guy on the street?’ It's a great pickup by our personnel folks,” Packers quarterback Aaron Rodgers said. “He can run, he's a great tackler, he's around the ball all the time, he's a great locker room guy. I mean it's baffling to me.

“We're just so thankful to have him because I think as he continues to make plays, his leadership opportunities will continue to grow, guys listen to him, he's leading the defense as much as he feels comfortable and that's a guy we're really lucky to have.”

The makeshift offensive line — which also included rookie right guard Royce Newman and right tackle Billy Turner — held up well all day, allowing the Packers to function like they would with their starters.

“These guys are always ready to battle,” LaFleur said. “I couldn’t be more proud of them. I guess the one silver lining to this whole thing is you’re developing some young guys in the process of this, that you never know, this game, especially at the end of the year what it can come down to.

“It’s great for the development of a lot of those guys, but we’re lucky to have great people that will battle and they put it all in each and every week, the amount of work that goes into it, and really happy for that room.”

DAVANTE ADAMS: It’s easy to take Green Bay’s Pro Bowl wide receiver for granted. But what Adams does week in and week out borders on remarkable.

Adams, who entered the game tied for the NFL lead with 31 receptions, caught 11 balls for 206 yards and a touchdown Sunday.

It was the first time Adams eclipsed 200 yards and the 16th time he’s had double digit receptions.

“We had a pretty productive day clicking up with each other,” Adams said. “Got some good 1-on-1 opps. I was doubled a decent amount of the day again, but I feel like it’s a credit to Matt (LaFleur) and 12 (Aaron Rodgers) for coming up with some plays to still get me some opportunities down the field. Felt really good catching that deep one down there. So just continue to capitalize on these opportunities we’re given and just snowball this momentum into next week.”

AARON RODGERS: Green Bay’s quarterback moved into fifth place all-time with 422 career touchdown passes. Rodgers began the day tied for sixth with Dan Marino at 420 and behind Philip Rivers at No. 5 (421).

PASS RUSH: Green Bay entered the day tied for 23rd in the league with just 7.0 sacks. On Sunday, though, the Packers had three sacks and pressured Bengals quarterback Joe Burrow throughout.

Preston Smith and Krys Barnes both had sacks, and TJ Slaton and Dean Lowry shared a sack. The Packers also had three tackles for loss and had heat on Burrow all day.

DARNELL SAVAGE: Green Bay had rolled off 16 straight points and grabbed a 16-7 lead late in the first half. Instead of going to halftime with a world of momentum, though, the Packers let the Bengals back in the game.

On a second-and-five from their own 30, Bengals rookie wideout Jamar Chase came from the slot on the left all the way across the field to the right. Bengals quarterback Joe Burrow escaped pressure, rolled right and threw deep for Chase.

Packers safety Darnell Savage stayed with Chase throughout his lengthy route and tried breaking up Burrow’s bomb at the Packers’ 25-yard line. Savage whiffed badly, though, Chase hauled in the deep pass and waltzed into the endzone to pull Cincinnati within 16-14 at the break.

SPECIAL TEAMS: Last week, Packers special teams coach Maurice Drayton had this to say about his units that continue to disappoint.

“To the uninitiated, and what I mean by that is those who do not study special teams understand it, they think it’s still the same old Packers,” Drayton said. “That’s not the case on some of these units. We’re really close.”

Week after week, Green Bay’s special teams units hurt the Packers. And this week, Crosby — one of the most consistent kickers in the game — nearly killed Green Bay.

Crosby missed a 36-yard field goal with just more than 2 minutes left in regulation that would have given the Packers a 25-22 lead. That snapped Crosby’s streak of 27 consecutive made field goals.

“Didn’t knock them through the uprights,” Crosby said when asked what went wrong. “We’re going to look at the film as we do every time, make or miss. We go and evaluate it, and I have to find the line on those and try to knock them through.”

Entering the game, Crosby was 44-for-46 on field goals since the start of the 2019 season. In the matter of 4 minutes, 4 seconds on Sunday, though, Crosby missed three field goals.

Earlier in the game, Crosby also missed an extra point. And the Packers also allowed Cincinnati’s Brandon Wilson to return a kickoff 44 yards.

“We’re really close,” Drayton insisted last week. “The locker room is positive. Those guys are really positive, they’re upbeat. So I just can’t wait to watch them rise. I want to see them do well, and they will.”

They certainly didn't on Sunday — which has been the story throughout the first five games of 2021. Fortunately for Green Bay, Crosby fourth game-winning try split the uprights.

“I mean that was a crazy end to that game,” Crosby said. “That’s insanity. The fact that we kept getting opportunities, you’ve got to give it up to our team, the way we fought to get in that position again and I just wanted so badly to come through there. It’s what I do. I had a couple go bad there and was really happy to hit that one.”

But LaFleur was far too conservative late in regulation and overtime with Crosby struggling through one of the worst days of his career.

Instead of being aggressive and going for the win with a touchdown, LaFleur called two run plays that lost five yards. Then LaFleur opted to kick the field goal on third down, and Crosby missed a 40-yard, potential game-winning field goal.

Even LaFleur admitted he became much too conservative down the stretch.

“There were multiple times I think we could’ve put the game away offensively and probably got a little to conservative,” LaFleur said. “I would say, especially with the guys that we have, trying to grind it out. Thankfully, the game went long enough that they covered for me.”