The Good, Bad And Ugly From The Green Bay Packers’ Embarrassing Loss To The New Orleans Saints 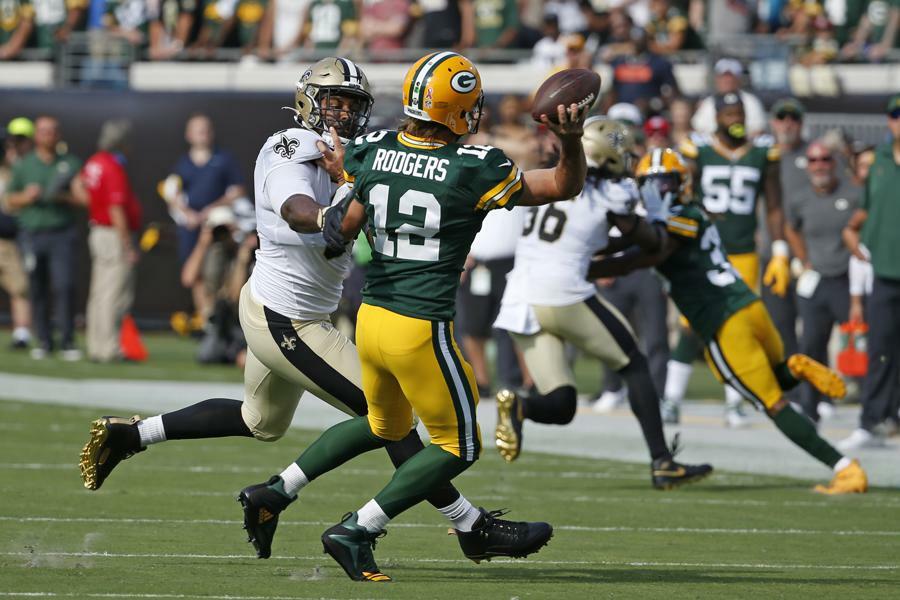 An offense that wasn’t ready for prime time.

A defense that was entirely overmatched.

And a coaching staff that was completely dominated by their counterparts.

The Green Bay Packers had arguably their poorest performance of the Matt LaFleur-era Sunday and were routed by the New Orleans Saints, 38-3. The last time the Packers lost a game by at least 35 points was Nov. 19, 2006, when New England defeated Green Bay, 35-0, in Mike McCarthy’s first season.

“Gotta give the Saints all the credit in the world,” Packers coach Matt LaFleur said. “They came ready to play. Absolutely embarrassed us today. You can’t do that against a well-coached and quality football team. Our guys are going to have to take a long, hard look in the mirror. It starts with myself. I obviously didn’t get these guys ready to play ball and that’s what happens when you go out there and play like that against a good football team.”

Here’s the good, bad and ugly from Green Bay’s defeat. For obvious reasons, we’ll begin with the ugly.

AARON RODGERS: Green Bay’s quarterback had a rocky offseason in which he said he’d never play for the Packers again. Rodgers eventually returned, but he looked nothing like the 2020 MVP against the Saints.

Rodgers, who didn’t play a snap in the preseason, was atrocious in his first action of 2021. Rodgers finished the day with a dreadful passer rating of 36.8, the third-lowest of his career in a game he started. Rodgers was 15-of-28 for 133 yards, two interceptions and no touchdowns.

The Packers also didn't convert a third down with Rodgers in the game. A year ago, the Packers led the league in third down conversion percentage.

“We probably felt like we were gonna go up and down the field on whoever they had out there and that obviously wasn't the case today,” Rodgers said. “I give (Saints defensive coordinator) Dennis Allen a lot of credit. “I think I've always thought he’s a really good defensive mind. They had a good plan.”

They sure did, and New Orleans forced Rodgers into just his second multi-interception game since the start of the 2018 season.

Green Bay trailed, 17-3, early in the third quarter and faced a second-and-7 at the Saints’ 9-yard line. With a touchdown, the Packers could have crept back into the game.

New Orleans rushed five, Rodgers stepped up in the pocket and threw left for Davante Adams who was running a crossing pattern. Rodgers’ pass was well behind Adams, though, and intercepted by rookie Paulson Adebo.

Green Bay’s defense was able to hold. On the Packers’ next series, though, Rodgers took a deep shot for Marquez Valdes-Scantling. But Rodgers’ pass was badly overthrown and intercepted by safety Marcus Williams.

As the game slipped away, Rodgers eventually took a seat and was replaced by 2020 first round draft pick Jordan Love.

“We played bad. I played bad,” Rodgers said. “Offensively we didn’t execute very well. One game. We’ve got 16 to go.”

JOE BARRY’S DEFENSE: Green Bay ranked ninth in total defense a year ago. It marked the first time the Packers cracked the top-10 in total defense since their Super Bowl winning 2010 season.

The Packers also ranked seventh in passing defense and 10th in sacks.

Mike Pettine, the man who coordinated that defense, was shown the door last offseason. Pettine was replaced by Joe Barry, who had flopped in previous stints as the defensive coordinator in Detroit and Washington.

If first impressions are the most telling, it could be a long season for Green Bay’s defense.

Saints’ quarterback Jameis Winston was extremely efficient, throwing five touchdowns and completing 70.0% of his passes. New Orleans also ran for 172 yards and went 7-for-12 on third and fourth down conversions.

HISTORICALLY AWFUL: This marked the first time the Packers lost a season-opener since 2014. It also marked Green Bay’s biggest loss under LaFleur and the Packers’ largest loss in a game started by Rodgers.

“It kind of caught me by surprise,” Packers running back Aaron Jones said. “I’m not used to losing like this. I know all the guys and myself included, around the locker room, we had a great feeling coming into this one.

“In the NFL, each team has a game like this a year, so I just think it’s best to get it out early. It’s a long year, 16 more games. Better to get it out now.”

TIME OF POSSESSION: The Saints controlled the ball, the clock and the game.

The Saints finished the game having the ball 34:36.

“It’s our fault that we’re not getting off,” Packers safety Adrian Amos said. “We brought that on ourselves by not getting off on third down, and a lot of that is us not doing well enough on first and second down to get off the field.

“When you have hot games like this, humid, the humidity out there, with it being the first game of the season, those compounding factors where we don’t get ourselves off on third down, getting three-and-outs, getting takeaways, things like that, we make the job harder on ourselves.”

THIS AND THAT: New Orleans outgained Green Bay, 171-43, on the ground. The Saints averaged 4.38 yards per carry. … Green Bay’s Kylin Hill averaged just 14.5 yards per kick return. … Jordan Love was sacked and fumbled with the Packers in the red zone late in the game. … Deonte Harris ran past cornerback Kevin King for a 55-yard touchdown reception in the fourth quarter. In many ways, it looked like the touchdown Tampa Bay’s Scotty Miller scored against King just before halftime in the 2020 NFC Championship Game.

Green Bay punter Corey Bojorquez averaged 44.0 yards per punt with a net of 40.8. Bojorquez also landed one punt inside the 20-yard line.