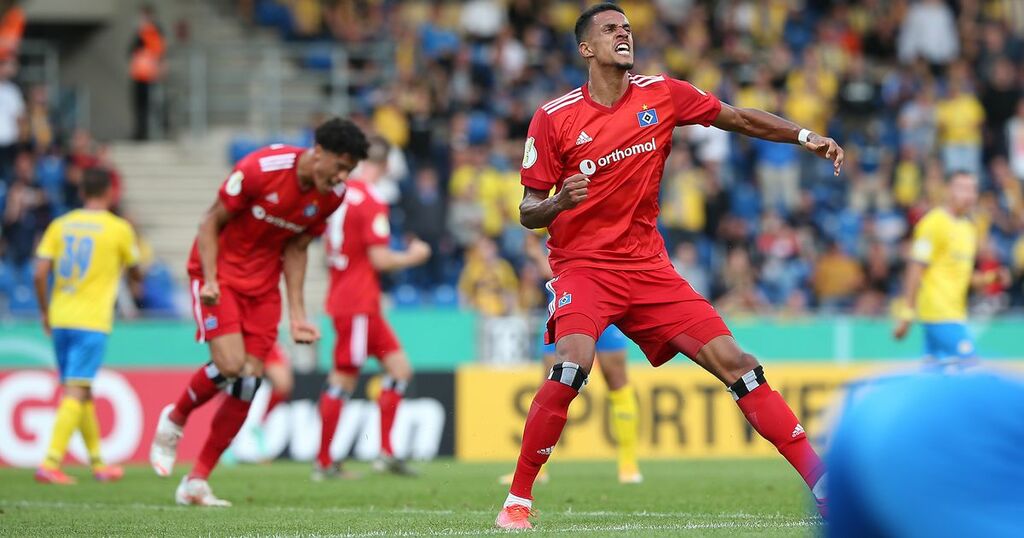 Given only four were brought in — and one of those was subsequently shipped out on loan — that has left quite the deficit.

But just how have the former Bluebirds, or loan departures, fared since they left the Welsh capital?

No doubt one of the more dividing transfers of the summer, Robert Glatzel was bought by German second-tier outfit Hamburg for around £775,000.

That, of course, is more than £4.5m lost on the striker, who joined from Heidenheim in the summer of 2019.

Glatzel never truly found his place at Cardiff, although he did show he knew where the back of the net was on occasion.

When Mick McCarthy said he was not a player who was going to fit in with what he wanted to do at Cardiff, few could really argue.

Glatzel is neither a target man nor was he an off-the-shoulder, industrious runner. But he had an eye for goal and that has certainly proved to be the case in his start to life at his new club.

The German has netted three times for Hamburg, twice in the league and once in the DFB Pokal, in his six competitive outings.

By anyone's standards, that is a healthy goal-return rate. His progress this season will be interesting to keep an eye on, no doubt.

It was a surprise to many that Jonny Williams left Cardiff City. He was given very few chances, but perhaps didn't do enough when he was given them.

Nevertheless, it seemed a surprise to him that he left, while McCarthy called him the perfect replacement for Harry Wilson towards the back end of last season. Somewhere along the line, wires were crossed there.

It is said that Williams turned down offers from the leagues above and abroad to join League Two Swindon Town, but manager Ben Garner said it came down to a footballing decision; he liked the style of play there and wanted to play games.

He is yet to start a game for Swindon, though, making just three substitute appearances. He registered an assist in his last game to set up the winner against Mansfield Town.

However, his display against Belarus on Sunday was hugely encouraging for Wales. His introduction, along with fellow Bluebird Mark Harris, injected some life into proceedings and was central to turning the game.

Joe Bennett's summer of rehabilitation had many Cardiff fans on tenterhooks, believing a new contract would be forthcoming.

But in reality, the club were just helping Bennett back to full fitness and the decision on his future had already been made.

He has been given the sign-off by the doctor and is back to full training once again.

The left-back joined League One outfit Wigan Athletic on deadline day and an exciting new challenge awaits for him up there.

It won't be too long before he is back on the pitch.

Joe Day was released after barely pulling on a Cardiff City shirt in two years at the club.

Thankfully for him and his settled family, he was able to return to his former club Newport County, where he has been installed as the No.1 once again.

He has played all five for County's League Two matches, keeping two clean sheets and even registering an assist.

Sol Bamba's release was another controversial one, with many, including the player himself, hopeful that a role could be found for him at the club.

It wasn't to be, though, and Neil Warnock offered him a helping hand up at Middlesbrough, where his contract takes in both playing and coaching duties.

The centre-back played all of Boro's 3-0 Carabao Cup defeat by Blackpool, however our sister title GazetteLive picked him out as their star player during the match.

Warnock brought Bamba on for one minute of their 2-1 Championship win over Bristol City, his only league appearance so far.

His work will be done largely behind the scenes this season, one suspects.

Watkins might go down as the player with the best-ever goals-to-game ratio in a Bluebirds shirt, having scored twice in his only competitive appearance for the club, a 3-2 win over Sutton United.

He was subsequently named on the bench for the Blackpool game just a few days later but was never seen in a Cardiff shirt again.

Watkins claimed the chairman "blocked" the option for him to sign a longer-term deal and he instead re-joined Aberdeen.

The Wales international said: “I got in at Cardiff but the chairman at Cardiff blocked it, and then Aberdeen were still interested, luckily, so I’m here now and I can’t wait to get going – it’s a great club.”

The 30-year-old has played once for his new side, coming on for 26 minutes in the 1-1 draw with Ross County.

Cardiff striker Max Watters has yet to kick a ball in anger for loan side MK Dons this term.

The 22-year-old has missed all of their matches after he picked up an ankle injury during pre-season.

The forward has played very little football this calendar year, failing to break into McCarthy's first-team plans in the second half of the 2020/21 campaign.

His head coach Liam Manning said on his growing injury list : “It's too big for my liking but every coach says that when they've got one player out. Max stepped up a bit today and joined in with a tiny part of training so he's progressing.

"We got Mo (Eisa)'s results, but I need to spend some time with Adam Ross to find out what his plan is. These days, we're a bit non-committal in terms of time frames because we don’t know how he'll progress or how he'll respond to treatments. He has a groin injury.”

The Northern Ireland international has been a regular fixture for his former team Oxford United, whom he has joined on loan.

Whyte has started four of Oxford's five league matches and registered an assist in the 3-1 win over Lincoln City in his last outing.

Whyte is another transfer which has caused controversy, owing to a split fan base over him and whether he fits into how McCarthy plays.

But he did well at Hull City last year and appears to have started brightly at League One with Oxford this term.

His goals and assists output will be crucial this term.

A little bit of a botched transfer from Cardiff this summer, it seems, but McCarthy seems adamant this is one for the future.

Wintle was brought in on a free from Crewe, but already City had Joe Ralls, Marlon Pack, Will Vaulks and Leandro Bacuna in situ, with Sam Bowen coming on leaps and bounds in pre-season.

The central midfielder, 24, was limited to two Carabao Cup outings and a 25-minute cameo against Barnsley on the opening weekend of the season.

Wintle has since joined Blackpool on loan for the remainder of the season, so we will see how that pans out for him with the Seasiders after the international break.

The winger didn't play a minute of Championship football this season before leaving for Preston North End on deadline day.

He featured as a substitute against Sutton United in the Carabao Cup, scoring a goal late on, before starting the defeat by Brighton a fortnight later.

With the emergence of Rubin Colwill and Mark Harris, couple with the loan signing of Ryan Giles and McCarthy's penchant for playing Leandro Bacuna on the wing, chances looked few and far between for Murphy.

The player's contract is up next summer. Whether he has played his final game in a Cardiff shirt is anyone's guess.

Should he tear up the Championship in the first half of the season, though, McCarthy will have a decision to make come January.