The EU has banned popular coloured tattoo inks over safety risks. Should Australia be concerned?

By Annika Burgess with wires 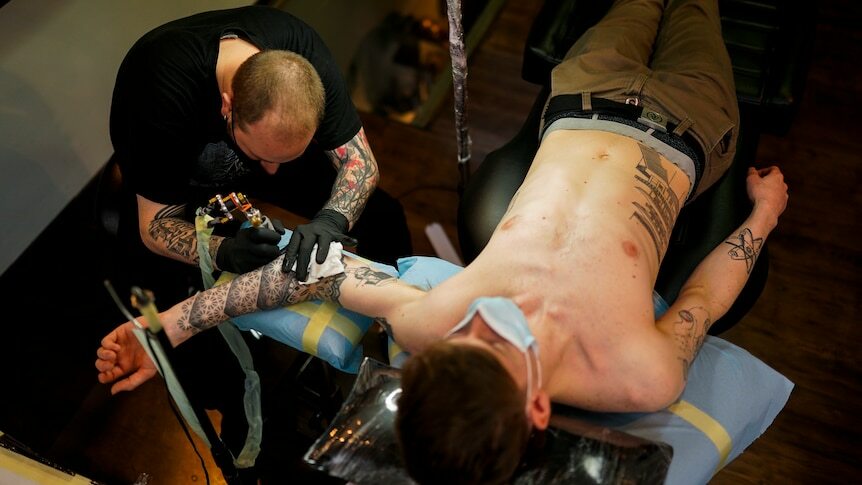 Typically, tattoo regret is the name of an ex branded across your chest, or a 2003 tribal symbol stamped on your lower back.

When going under the tattoo gun, it's unlikely you would be thinking about a potential cancer risk.

But it's something European Union (EU) regulators have been worried enough about to ban some of the most popular tattoo inks — sparking an angry reaction from tattooists.

One artist described the move as like "taking the flour from a bakery" while a Save the Pigments petition, which has already collected 176,000 signatures, opposes the ban, saying it is not sufficiently backed by science.

The EU new law, which came into force this week, limits the use of chemicals that the European Chemicals Agency (ECHA) says are hazardous.

Some of those linked to cancer, reproductive difficulties and skin irritation are contained in mixtures for tattoo inks and permanent make-up (PMU).

After conducting an assessment into the health risks of chemicals in tattoo inks, the ECHA concluded that the use of some 4,000 chemicals should be limited, including  isopropanol alcohol which is a common ingredient in inks.

The ECHA report notes that there is currently no direct evidence of tattoo ink causing cancer, but research has found instances of pigment particles from the inks spreading into people's lymph nodes.

Under the regulation, a range of pigments must no longer be used, while others must meet concentration limits for groups of substances or individual substances.

Considering that at least 12 per cent of Europeans have tattoos – at least 54 million people – and double that number in the 18-35 age group, the ECHA says the guidelines are necessary.

"The aim is not to ban tattooing but to make the colours used in tattoos and permanent make-up safer," the ECHA said.

It expects "chronic allergic reactions and other inflammatory skin reactions" to decrease due to the restrictions.

'A rose with brown leaves is a lot less attractive'

Tattoo artists argue the inks have been in circulation for decades and alternatives do not yet exist or are in short supply, and the law deals a blow to an industry already reeling after repeated lockdowns.

The law was agreed in December 2020 but the industry was given a year to adjust and find alternatives.

An extra year has been given to find alternatives for Pigment Blue 15 and Pigment Green 7, which have been the focus of the Save the Pigments petition as they are more difficult to replace.

Tycho Veldhoen, a tattoo artist in Amsterdam who has spent a quarter century in the profession, fears there will be an "enormous impact" on his work once certain colours are banned.

"Because, like a painter, you suddenly lose a gigantic part of your palette," he said.

"A rose with brown leaves is a lot less attractive than a rose with green leaves."

Should Australians be worried about risks?

In Australia, where according to the latest Australian National Health and Medical Research Council data, one in seven people are now "inked", body art tattoo inks and PMU pigments are currently unregulated in all jurisdictions.

This is despite Australian research that some of the chemicals may be harmful.

In 2016, a report by the Australian Industrial Chemicals Introduction Scheme (AICIS ) found that one in five tattoo inks used in Australia contain polycyclic aromatic hydrocarbons (PAHs), a group of chemicals known to be carcinogens.

PAHs were found in more than one-fifth of the samples tested and in 83 per cent of the black inks tested.

Of the 49 inks NICNAS tested, only four complied with the European standards.

No inks are made in Australia with all of them imported, typically from Europe, the US and China.

The Australian Cancer Council says while it is "not aware of a reported cancer case directly attributable to tattooing", it acknowledges the evidence that some tattoo inks contain carcinogens – or cancer-causing substances.

It has also found that tattoo inks have been "associated with cancers elsewhere in the body, such as the liver or bladder".

According to the Cancer Council: "Over time, macrophages take up pigment and may transport it into the lymphatic system and lymph nodes. This means other tissue in the body can be exposed to potentially carcinogenic materials in the tattoo ink."

What do tattoo artists say about safety?

Chris Rand, a tattoo artist and treasurer of the Professional Tattooists Association of Australia, told the ABC the new EU laws were "not workable" and there wasn't enough evidence of the health risks to justify the ban.

He said professional tattoo artists were highly vigilant when it came to ink safety and mainly relied on well-established brands.

"If there was a problem with a pigment, a tattooist would know about it because we're seeing clients over a prolonged period," he said.

"Some of my clients I've tattooed for 30 years. If there's problems with pigments, you'd get feedback back from the client."

"You rely on your supply chain, and you rely on word of mouth from experienced professionals that have been in the industry a long time on what pigments are safe, and what pigments perform well on the skin," he said.

AICIS told the ABC that state and territory authorities were responsible for regulating tattoo and permanent make-up businesses.

It said recommendations were made in its 2016 report – which was updated in 2018 – that included product labelling and restrictions on their use in tattooing.

Tina Viney, chief executive of the Aesthetics Practitioners Advisory Network (APAN), said regulation progress had been made in Australia but the final conclusion shouldn't be rushed.

She believes Australian regulators should follow the EU's lead, but understands commercial needs must be considered.

"The concern that we have is that from a regulatory perspective, we are very, very conscious of two sides. One is the safety of practitioners and the public, but we do we understand we've got to get the commercial side right," she said.

Last year, amendments were introduced into Queensland Parliament that would have made it an offence for tattoo ink manufacturers and suppliers to provide ink or use it for tattooing without ensuring a compliance analysis certificate had been prepared.

However, the government was forced to backflip amid outcry from the tattoo community that it would cripple the industry as the condition would be "impossible" to meet.

In a Facebook statement at the time, Queensland Health Minister Yvette D'Ath agreed it was important to protect both tattoo artists and their clients from harm and hoped there would be "national uniformity on consumer and health issues, such as the tattoo inks".

Mr Rand said the requirement would have forced those who couldn't comply to tattoo illegally in an underground setting or send clients to markets in Bali and Thailand instead.

He suggested that a starting point for regulation would be to limit the supply chain so not just anyone could buy and sell tattoo machines, needles and pigment off online platforms like Gumtree and eBay.

"A lot of manufacturers that are in the market have come from being tattooers themselves, so they're always looking at new ways to differentiate themselves from the dodgy suppliers," he added.

"They provide medical safety data sheets and ingredient lists, with all the labelling given through their websites. These are the kinds of measures in place that the industry is coming up with themselves."