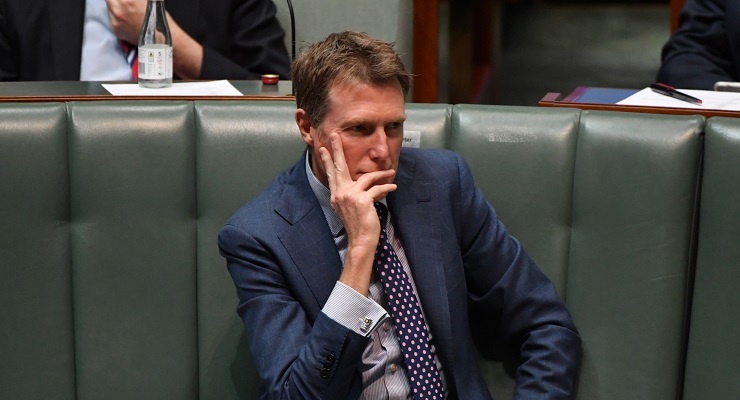 That Christian Porter thinks it’s appropriate to remain a cabinet minister in the absence of an independent inquiry into much-denied allegations of sexual assault is bad enough, but there can be no doubt he has now spat in the face of any Australian who thinks there should be basic level of transparency and integrity in government.

His declaration of being the beneficiary of an anonymous windfall for his legal costs in his withdrawn legal action against the ABC — where the story revealing allegations of rape by a cabinet minister remains up, intact — is an act of gross contempt for political integrity.

In a way, such arrogant behaviour by this privileged man-child has done us a favour in revealing just how piss weak federal standards of accountability are — standards fit for a tinpot dictatorship rather than a country that feels entitled to lecture others about democracy.

We know that politics in Australia is pervaded by soft corruption. We know that powerful corporate interests and super-rich individuals buy decisions and policies at the state and federal levels. Major areas of public policy in Australia are controlled by industries that buy outcomes and the politicians that create them: climate and energy policy, financial regulation, gambling regulation, property development.

The difference between the states and the Commonwealth is that most states have some measure of protection against blatant corruption. Most have better political donation disclosure laws. All have some form of genuine anti-corruption commission. Some like NSW and Queensland have meeting disclosure laws. NSW has banned property developers from donating to politicians and taken local government out of the property development approval process in Sydney.

But under the federal Coalition, not merely do the egregious faults of the Commonwealth’s few accountability and transparency laws go unremedied, we’re going backwards on transparency: freedom of information laws are ignored and treated with contempt, vast swathes of donor money are increasingly undisclosed, journalists and whistleblowers are prosecuted and harassed by police, and the government resists providing even basic information about the destination of tens of billions of dollars handed to the business sector.

And of course there remains no Commonwealth anti-corruption body — it’s now more than 1000 days since Porter and Prime Minister Scott Morrison announced they’d create one — even as the scandals and rorts pile up in the most corrupt government in federal history.

Now Porter sums the whole debacle up by treating us with utter contempt in relation to his parliamentary requirements for disclosure of interests. To whom does Porter, who remains a cabinet minister, owe a large debt? A media owner who would benefit from changes to media regulation? A fossil fuel company anxious to prevent climate action? A representative of the Chinese government eager to have ears inside cabinet? Organised crime?

And what do they want for their money? And when will they call in the debt? No one knows. Even Porter claims not to.

What a shabby banana republic the Commonwealth of Australia is.