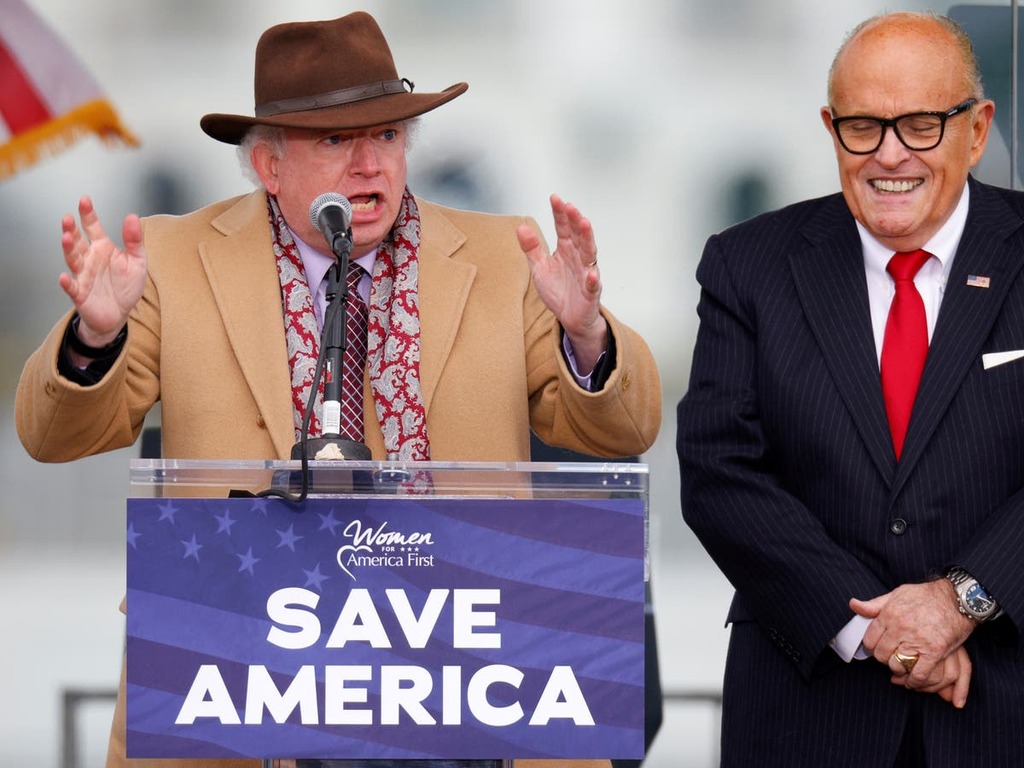 He suggested a way for Pennsylvania legislators to cancel Joe Biden's win.

John Eastman, the architect of then-President Donald Trump’s last-ditch strategy to overturn the 2020 election, has claimed attorney-client privilege over…

The Email That Shows the Absurdity of the Paperwork Coup

By David A. Graham

One of the most dangerous elements of Donald Trump’s attempt to steal the 2020 election is how it collapsed the gap between two distinct functions: electioneering and election administration. Both are political, insofar as elected officials oversee elections, but they begin from different premises. Election administration starts out with rules for the election and then uses those rules to determine the outcome; a candidate starts out with a goal of winning the election and tries to find a path to achieve it within those rules.

But Trump and his allies approached the aftermath of the 2020 election by treating them as the same. They started with an outcome—Trump had to win—and sought to rewrite the rules after the fact to achieve it. Although he had apparently not reviewed a new set of emails from the conservative legal Svengali John Eastman when he wrote it, this is exactly what Judge David Carter meant when he described Eastman and Trump’s actions as “a coup in search of a legal theory.”

[David A. Graham: A federal judge just told the truth about Trump]

The absurdity and brazenness of this approach is on display in those new emails from Eastman, uncovered in a public-records request in Colorado, where he was a visiting scholar at the University of Colorado. The most interesting messages are an exchange between Eastman and Russ Diamond, a Republican state representative in Pennsylvania.

Diamond wrote to Eastman, intrigued by his theory that a state legislature had the authority to appoint electors, irrespective of the popular vote. The idea is legally dubious—the overwhelming consensus of legal scholars holds that a state legislature can’t simply change its mind about the method of election after the votes are cast—and perhaps even more politically suspect, given that voters are unlikely to appreciate having their votes summarily ignored. The trick, Eastman wrote, was to “provide some cover” for the legislature.

Eastman had already decided—without any proof—that the election was tainted by fraud. “I did not watch the hearings that were held, but I suspect they contained ample evidence of sufficient anomalies and illegal votes to have turned the election from Trump to Biden,” he wrote in a December 4, 2020, email. Instead of proving that, though, he resorted to arithmetic.

[David A. Graham: The paperwork coup]

First, he wanted to discard roughly 10,000 mail-in ballots that arrived after the statutory deadline but during a grace period ordered by the state Supreme Court. Then, he noted that the rejection rate for mail-in ballots had sunk from 4 percent to 0.34 percent, so he recommended throwing out a portion of the remaining ballots, proportional to the overall percentage of absentee votes each candidate received.

“Then, having done that math, you’d be left with a significant Trump lead that would bolster the argument for the Legislature adopting a slate of Trump electors—perfectly within your authority to do anyway, but now bolstered by the untainted popular vote.”

The idea was a very slightly more refined version of what Trump would try a month later in Georgia, when he begged Secretary of State Brad Raffensperger to somehow conjure just enough votes to give him a victory. “All I want to do is this. I just want to find 11,780 votes, which is one more than we have because we won the state,” he said.

[David A. Graham: The price of a failed impeachment]

Setting aside the poisonous motivation, Eastman’s plan had glaring flaws. First, the 10,000 votes hadn’t been included in the certified election total anyway. Second, they wouldn’t have all been for Biden. And third, as The Washington Post’s Philip Bump calculates, Biden would have won a majority even with Eastman’s math applied.

But the largest, and ultimately insurmountable, problem in turning Pennsylvania into a Trump state was that Joe Biden won substantially more votes in Pennsylvania than Donald Trump. There were early warning signs, as Diamond acknowledged to Eastman, writing: “Honestly, the Trump legal team was not exactly stellar at PA’s hearing, failed to provide the affidavits of their witnesses, and made a glaring error by purporting that more ballots had been returned than mailed out.”

Math tricks weren’t the only idea discussed. Diamond also shared a draft resolution with Eastman that complained that the state Supreme Court had usurped election authority properly belonging to the legislature by extending a deadline for ballots and changing standards for signature verification. But these questions had been litigated, and the legislature didn’t have the right to simply decide that because it didn’t like the outcome of the legal process, it could declare it wrong and ignore it.

[David A. Graham: Democrats are still delusional about Trump]

The brazen motivated reasoning at the heart of Eastman’s project also emerges in a flip-flop on the Electoral Count Act. In his correspondence with Diamond, he wrote that objections in the U.S. Congress to slates of electors would likely fail. “ONLY IF both houses then agree to the objection is the slate deemed invalid. If the House doesn’t agree to the objection, as is almost certain (the vote here being by majority rather than by state), then the objection is not sustained and the slate is counted.”

By January, however, he was pushing the idea that Vice President Mike Pence could reject a slate of electors on his own authority. (Pence disagreed and refused to do so, and Biden was certified the winner.) Nothing about federal law in that time had changed. All that had changed was that Eastman’s earlier attempts had fallen short. He had to look elsewhere to “provide some cover.”

Though everything we already knew about the paperwork coup has demonstrated it, Eastman’s email proves yet again that the MAGA goal was never about the sanctity of elections. It was engineering a Trump victory by any means possible. The ploy failed in 2020, but since then, Trump supporters have mounted a concerted push to take over offices that control elections around the country. Many of them will be working from the Eastman premise that election administration is all about ensuring the outcome they’ve already chosen.

He suggested a way for Pennsylvania legislators to cancel Joe Biden's win.

John Eastman, the architect of then-President Donald Trump’s last-ditch strategy to overturn the 2020 election, has claimed attorney-client privilege over…