‘The destruction is enormous’: Thousands more flee Mariupol and 350,000 remain hidden in shelters

The family thought they had finally made it out of Mariupol after three weeks of siege, but their journey still had one final ordeal. As the car drove through another of the Russian checkpoints they had encountered leaving the shattered city, soldiers ordered the menfolk out of the car and told them to hand over their phones.

“My son, they told him to show him everything he had in his phone and they looked through all his things,” recalled Roman Konyahin. “They took him away and put him near the wall. They were pointing the guns on us all the time. I thought my life was over. Then they asked why my phone didn't have any photos in it. I said I've been in a bomb shelter with no electricity or water, what do you want me to take a photo of?

“I think they were looking for compromising material – like if I had something saying Putin is a d---.” Mr Konyahin, a 55-year-old bus driver, said they had also asked his son to raise his shirt, so they could check his body for incriminating tattoos. Mr Konyahin said they were looking for nationalist, or military symbols. Clips filmed at checkpoints and broadcast on Russian media also showed separatist militia members checking for tattoos.

Thousands of Mariupol residents continued their exodus on Thursday, braving minefields, freezing weather and checkpoints to flee the devastation. The southern port city has suffered the worst humanitarian catastrophe of the war, as it has been cut off and pounded with artillery fire and air strikes.

Its position between eastern territory controlled by Russia-backed separatists on one side and the Crimean Peninsula annexed by Russia in 2014 on the other makes it a key target for the Kremlin. Mariupol's city administration said in the past 48 hours some 6,500 private cars had fled the city carrying around 30,000 people, arriving exhausted in the nearby city of Zaporizhzhia.

On Thursday, the streets out of Mariupol were jammed with cars, many of them displaying signs declaring “children on board” in the windows.

‘They fire so many rockets’

It remained unclear how long the humanitarian corridor might remain open. Mariupol's authorities said that after 16 days of siege, the situation was critical. A statement said more than 350,000 residents were still hiding in shelters and basements.

“The destruction is enormous. According to preliminary estimates, about 80 per cent of the city's housing stock is destroyed, of which almost 30 per cent cannot be repaired,” a statement said.

Authorities claimed the city is being hit by 50 to 100 bombs each day. They have recorded more than 2,500 dead, though estimate the real total may be closer to 20,000 because so many bodies are lying uncounted and unburied around the city. Mr Konyahin said: “Eighty per cent of the city is gone. The neighbouring building was eight floors tall. It got shelled and burned for four days. Bodies are lying on the street.”

“They fire so many rockets,” Tamara Kavunenko, 58, told AFP. “In the streets there are the bodies of many dead civilians,” she said. “When the snow came, we collected it and melted it for water. When it didn't, we boiled water from the river to drink,” Ms Kavunenko added. “It's not Mariupol anymore. It is hell.”

A man called Dima said he had not washed in two weeks and he had  looted shops for food to feed his children and grandparents. “We lived underground and if it was -4C it was a good temperature,” he said, lifting his leg to show that he is wearing three pairs of trousers for warmth.

“Sometimes bodies are in the street for three days,” he said. “The smell is in the air and you don't want your children to smell it.”

Civilians arriving at the car park of an out-of-town Zaporizhzhia cash and carry which has become the reception point for Mariupol refugees must also face checks from Ukrainian police. Officers said they were checking those arriving were not security risks, meaning infiltrators or saboteurs trying to take advantage of the escaping convoy.

The Konyahin family's arrival also meant they had access to phones and internet for the first time in more than a fortnight. His daughter, Kristina, sat and cried as she was able to speak to her husband again. An assessment by British military intelligence said on Thursday that the invasion had “largely stalled on all fronts”, and Russian forces were suffering heavy losses amid stiff Ukrainian resistance.

With the Kremlin having failed to quickly capture its objectives, the war has instead appeared to be settling into a grinding pattern of sieges of cities with terrible consequences for civilians. The United Nations said 3.2 million civilians, mostly women and children, have now fled Ukraine to neighbouring countries.

Elsewhere, the northern Ukrainian city of Chernihiv had experienced “colossal losses and destruction” during heavy bombardment from Russian artillery and air strikes, its governor said. Viacheslav Chaus told Ukrainian TV that the bodies of 53 people “killed by the Russian aggressor from the ground or from the air” had been delivered to city morgues over the past 24 hours.

Ukraine's emergency service said a hostel was shelled, killing a mother, father and three of their children, including three-year-old twins. The Ukrainian General Prosecutor's Office said the previous day that 10 people were killed in Chernihiv while standing in line for bread. Russia has denied involvement.

One of the dead was on Thursday identified as US citizen Jimmy Hill, 67, from Minnesota. His family said he had been living in Chernihiv for 25 years and worked as a teacher. Mr Hill had been caring for his partner, who was undergoing treatment at a local hospital. His sister Katya told Minnesota TV station KARE 11 that his death had been confirmed to the family by the US Embassy.

For the last few weeks, Mr Hill had been describing conditions in the city on Facebook, saying there was machine gun fire outside the hospital. On March 3 he wrote: "I can see an orange sky over city. They are trying to terrorise the population here. Most people in hospital too tired or sick to go in cold basement bunker."

Mr Chaus said civilians were hiding in basements and shelters without access to utilities in the city of 280,000 people. “The city has never known such nightmarish, colossal losses and destruction,” he said. Chernihiv, which is close to the borders with Belarus and Russia, was among the first Ukrainian cities to come under attack from Russian forces when the invasion began three weeks ago.

Officials also said 21 people had been killed by Russian artillery that destroyed a school and a community centre in Merefa, near the northeast city of Kharkiv. Merefa Mayor Veniamin Sitov said the attack occurred just before dawn on Thursday. In eastern Ukraine, a municipal pool complex where pregnant women and women with children were taking shelter was also hit on Wednesday, according to Pavlo Kyrylenko, head of the Donetsk regional administration.

There was no word on casualties in that strike. Those finally reaching safety in Zaporizhzhia after fleeing Mariupol said many of those left behind were elderly, or did not have access to transport. One woman, called Olga, broke down when recounting how her elderly parents had decided to stay. “Many of the people who are left, they are very old. They have no opportunity to leave.” 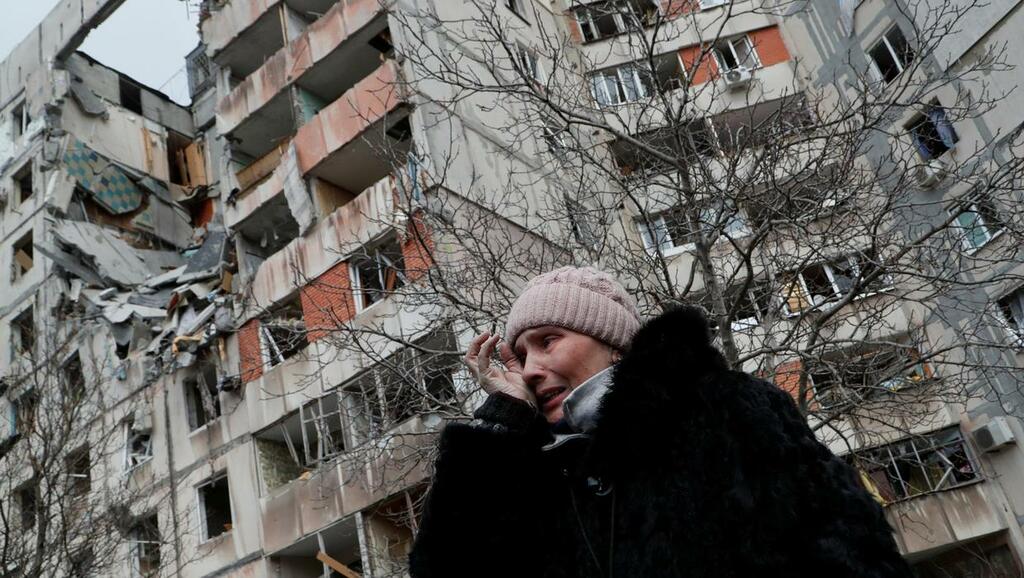 ‘About 80% of the city is gone. Bodies lie on the streets’
The family thought they had finally made it out of Mariupol after three weeks of siege, but their journey still…

Irish Independent
One subscription that gives you access to news from hundreds of sites
‘The Second World War was easier than this’: Families flee ruins of Mariupol with shattered lives