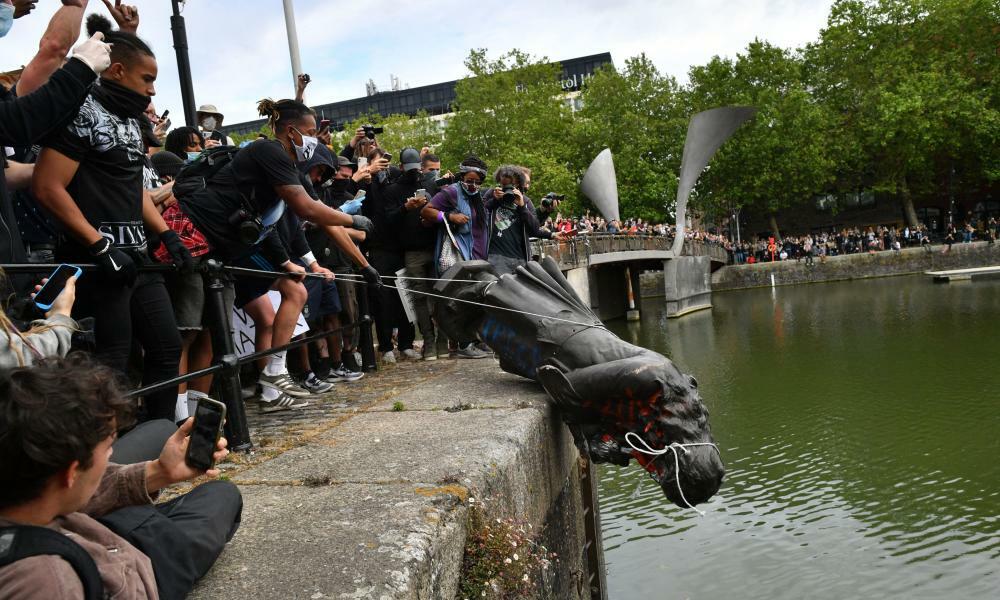 It was inevitable, but the speed with which it happened was still surprising. After the four protesters who toppled the statue of Edward Colston then helped to heave it into the harbour were acquitted, Conservative MPs, the rightwing press and the prime minister himself unleashed their volley of rage at the verdict. “Vandals can’t change our history,” postured Boris Johnson on the front page of the Daily Mail. A “green light to ransack the past” said the Sun. “A monumental mistake” punned the Telegraph, weakly.

If one were a cynic, one would think that the newspaper stories, the statements and the tweets were all sitting in draft form, waiting to be posted, emailed and published. The responses were so rehearsed, so obtuse and so optimised for a polarising landing, that the issue seemed less about Colston’s statue and more about their rigid vision of Britain, a country that – in their eyes – has done no wrong, that owes no apology and should show no humility.

Certainly that seemed to be the motivation of Suella Braverman, the attorney general. For as soon as the media screams died down, she made clear her distaste at the trial’s outcome – predicated, lest we forget, on the decision of a properly convened jury of her fellow citizens – by threatening to refer the matter to the appeal court. There was “confusion”, she said. We needed “to clarify the law for future cases”. Clarity, one might suggest, that would better protect that never-to-be-questioned version of Britain.

But that version of Britain, in which figures such as Colston are remote characters from the past who have no bearing on our lives today, is a fiction. The Colston statue topplers, and the Black Lives Matter protesters in general, are the ones trying to drag Britain’s view of itself closer to reality, one in which community relations are still strained as a result of deep inequalities that run, like cracks, from the past to the present.

Maintaining fictions is hard work, so an army of propagandists must mobilise to spin, yarn and stitch together the lies that make up this permitted view of British history. One that displays the iconography of slavery and of empire in our public spaces and consciousness.

The narrative that frames the Colston statue incident – and indeed all arguments about British history – is spun broadly around the clash of two schools of thought. One, an innocent, stoic, impartial one, not invested in any particular ideological narrative, and another that is aggressive and politically motivated. According to this construct, Colston stood peacefully, undisturbed by campaigns to remove or maintain him for years until some protesters, in a rush of blood, tore him down. In this world of neutral arbiters and wild vandals, we are led to believe that Colston was toppled by people who do not trade in logic, and have no respect for dialogue, or interest in peaceful resolution.

The truth is that the protesters were motivated by frustration. All the peaceful avenues were exhausted, because those who kept Colston up were pugnaciously committed to the elevation of a statue of a slave trader, rather than considering what he represents in a modern Britain that is as delusional about the moral integrity of its colonial heroes as it is about the health of its race and ethnic relations.

It is a trick that is constantly played by those who view British history as an objective and inoffensive series of facts that must be preserved for the record, rather than a living legacy of supremacy, both racial and national, that many are still invested in, and that still resides not just in our streets and squares but in our politics, our education and our economy. Most crucially when it comes to Colston’s statue, it resides in our government.

There is no better example of how quickly history is rewritten to suit the establishment than the aftermath of the Black Lives Matter protests in the summer of 2020. What seemed like a moment of profound change was quickly miscast as the opposite, a marker in the sand for what happens when demands for racial equality are taken too far, when they become violent, militant and vandalistic. In that framing, there can be no place for the reality that Colston’s name was already being expunged from Bristol’s public spaces, a process that was citizen-campaign-led, consensual and consultative. There had been frequent rows dragging in historians, schoolchildren, councillors, the mayor and Bristol’s Society of Merchant Venturers – the guild and body that is accused of creating Bristol’s “cult of Colston”. And yet the council says it never considered removing the statue despite “significant community concerns”.

This is what we continually fail to understand about the importance of reappraising our history: friction arises not from “woke vandals” but from a state that clings, despite all entreaty and evidence, to a glorification of a past that reinforces and legitimises all the injustices of the present.

If those in the government and the media who are so critical of the toppling of Colston were really interested in forging a state of community cohesion, they would acknowledge the moral sins that built Britain’s wealth and empire – past cruelties that still reverberate across social mobility, life expectancy and job prospects. Instead, they fan the flames of a hysterical moral panic that claims the toppling of Colston was about destroying historical fact, rather than being a victory for that truth they work so hard to deny.

We will only move forward when the organs of government, from Downing Street to local councils to education boards, resolve to take people’s demands seriously. Otherwise the state, which has now been unmasked as a partisan mediator through its intransigence in Bristol, loses all legitimacy and therefore control. That really would be, as Conservative MPs describe it, a licence to vandalise.